Home » Lifestyle » Being A Woman In America Right Now Is Trash

Being A Woman In America Right Now Is Trash 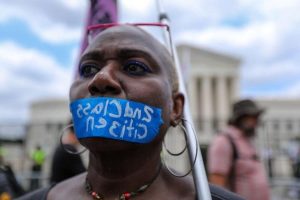 It’s really rough to be a woman right now — whether you’re looking to have a child, not have a child, or you just want to get through your period in peace.

I, like everyone else, heard back in May about the leaked draft of the decision from the Supreme Court that they voted to overturn Roe v. Wade. But now that it’s official, for some reason, I feel betrayed.

Well, not for some reason. It’s not because I thought the conservative-led Supreme Court would have a change of heart after all the initial backlash to the news. No, it’s because at every turn, women are being left to fend for themselves right now.

The basic essentials we need for ourselves and the children we now have to have, lately, have become inaccessible. And the rights you should have over your own body have been stripped away by people putting their personal beliefs over the needs of the people. How can you force people to birth children at a time when the country can’t adequately provide for the needs of the American family?

If you are a teenager or a grown woman, it’s become incredibly hard to get your hands on feminine hygiene products due to a shortage. I’ve had to ration off super tampons to a friend just so she could have some peace of mind.

If you are not in a place where you feel like you’re ready to care for a child, which is a monumental, expensive and life-changing responsibility, you will no longer have the protections in place to make that decision. They’d rather you risk your life to make it happen or be forced to have a child you’re not ready for.

You will have to go into great debt if you don’t have adequate insurance to cover appointments, get constant bloodwork and scans done and eventually give birth. The latter costs, of course, are the biggest, as you’re scammed at the hospital over the five minutes your child is in the nursery and the steak dinner you decide to have them make for you after the exhaustion of birthing a human being. (Listen, as someone who spent almost two years fighting my insurance company over their removal of payments because my husband was born first in the calendar year, therefore making his insurance the primary for my son’s hospital bills, I’m here to tell you the business of birthing is full of scams.)

From there, you may not be able to track down the formula they need if solely breastfeeding doesn’t provide the amount of nourishment your child requires, or if, by chance, nursing isn’t an option for you or your child. There’s the whole formula shortage, remember? And don’t forget about the recall that predated that shortage due to deadly bacteria in formulas from a few of the most popular brands.

If you get over that hump and you want to find child care for your kid because your maternity leave package at work (if you have one) would only suffice for you taking six weeks off of work because the disability pay percentage of your check is inadequate, you might find yourself in another bind. Yes, there’s also a child care shortage. I’ve talked about it with parents at the playground trying to find, at this point, just a decent daycare to take their kids to so they can work without distraction and guilt. This, is a reality whether you make six figures or are working multiple jobs to make ends meet.

And then, when your child gets older and you finally start sending them to school, you have to worry as a mother about whether or not they’ll actually be protected when they’re there. The shooting at Robb Elementary School in Uvalde, Texas understandably created major fears for both students and parents as incidents of gun violence continue to increase. And despite this real fear, the solution from the Supreme Court, also decided this week, was to expand gun rights, allowing individuals to carry firearms in public for self-defense so people can shoot each other, more than they already do, over a perceived threat in the street.

And as Justice Clarence Thomas ruled in favor of overturning Roe v. Wade, he also called on the court to consider overturning cases concerning same-sex marriage, the legality of same-sex activity and Griswold v. Connecticut, which protects couples’ ability to buy and use contraceptives without government restriction. We’re about to go after contraceptives to keep people from getting pregnant?

So much is being done to roll back rights while the things we need to care for ourselves and these kids are slipping through our fingers. Where is this same energy? (And I haven’t even said anything about the cost of gas, the housing shortage, a worsening food crisis and more things that are generally scary and aggravating for everyone right now).

So yes, being a woman in this country is trash right now. We are tasked with carrying and primarily caring for children and this country hasn’t done enough to make any of that easier; not before this decision and certainly not after. And we all know if this was a situation where the rights of men were in question, it would be hell to pay. But yet, because this is happening to women, and could soon impact other minority groups, we’ve found ourselves back in the stone age. I call bullsh-t.

Not only is the reality of this decision terrifying, but it’s also maddening. And if you’re not even a little angry about it, well…you must be a heterosexual white man. Or Clarence Thomas.