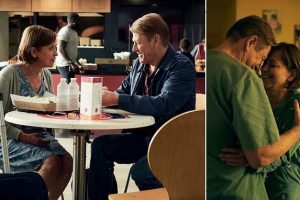 ‘Boring’? No, this drama captures the quiet devotion of marriage that so many will recognise: BEL MOONEY has been left moved and inspired by BBC’s latest drama

The drama is so true to life it makes you wince. Then laugh, groan, cover your eyes…then cry.

Are married people really like that? Do they say ‘yeah’ all the time to fill the silences between them? Do they smile awkwardly and say ‘all good!’ to hide the heartbreak inside? The answer, according to writer-director Stefan Golaszewski, is a resounding ‘yes’.

That’s why his four-part BBC1 drama, called simply Marriage, is such a triumph.

Too used to crime shows that start with somebody (usually female) who met a horrible death, or glossy dramas like The Split and The Politician’s Wife which portray slick, horrible people in unrealistically glamorous homes, critical viewers found Marriage much too slow-moving.

Marriage tells mundane, unvarnished truth, in contrast to those fantasy worlds where everybody, dressed in designer clothes and glugging wine, plans adultery behind expensive bi-fold doors. Marriage — both the drama and the reality — requires patience. 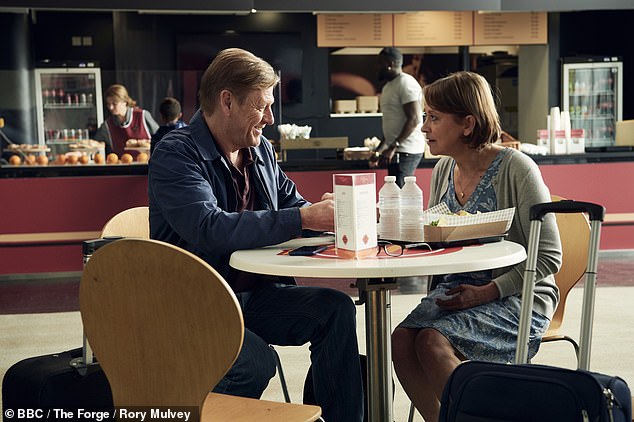 Are married people really like that? Do they say ‘yeah’ all the time to fill the silences between them? Do they smile awkwardly and say ‘all good!’ to hide the heartbreak inside? The answer, according to writer-director Stefan Golaszewski, is a resounding ‘yes’

And the frenetic, revved-up, instant world of Twitter cannot bear too much reality.

Real life, in all its complexity, is the subject of one of the most compelling TV dramas I have watched in years.

Unused to realistic silences, no wonder many impatient viewers gave up at the first hurdle. It’s their loss.

Yet I find the superficial criticisms of this fine drama sadly revealing of wider attitudes these days. Because far too many people crash out at the first blip in any relationship, let alone have the emotional stamina to stay the course in a long marriage.

Now, 15 years into my second marriage, and after 17 years of writing an advice column, I know that marriage is the greatest test of character most of us will ever have to face.

I’ve already watched all four episodes, yet the notion of any ‘spoilers’ doesn’t even crop up here. There are no cliffhangers, no twists, no surprise villains.

This is a small saga of everyday life, at the end of which there really isn’t much change from where we found the characters, Ian and Emma, at the start.

Played brilliantly by Sean Bean and Nicola Walker, the couple have been married for 27 years and are much, much closer than the careless viewer might think, watching their silly (and oh-so-typical) opening row over the chips he didn’t want. Such petty disagreements are the stuff of everyday life — like which kind of chicken to buy or whose turn it is to empty the dishwasher. 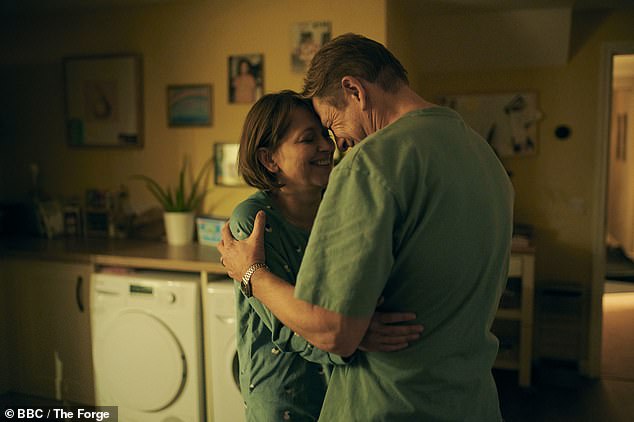 I’ve already watched all four episodes, yet the notion of any ‘spoilers’ doesn’t even crop up here. There are no cliffhangers, no twists, no surprise villains

You hear edgy, sweary Emma say: ‘Oh, don’t turn this into something,’ and recognise that, in every marriage, there comes a moment when you can choose to escalate — or to diffuse. Sadly, countless people choose escalation. They like to make a mountain out of a molehill because it adds what screenwriters call ‘jeopardy’ — putting them at the centre of their own small drama. If you’re a bit bored with life, and secretly wish things were different, a fierce quarrel can allow selfishness to rip.

Therapists even say a good row can let off steam and help a marriage along. Really? Personally, I never quarrel — truly. Because I know from my childhood how much lasting damage the constant bickering of a married couple can cause. I’d counsel self-control and understanding instead.

The disagreements we see between Ian and Emma are always trivial. During the four hours of the BBC drama, we are made privy to their married life over a couple of weeks.

Their problems are ones millions of other people have to deal with: bereavements, redundancy, the pressure of caring for a demanding, elderly parent, an ambition versus a sense of failure, anxiety over a beloved child’s unsuitable partner, jealousy, crippling lack of confidence and anxiety.

Not to mention the tedium of the daily round of shopping, cooking, emptying the dishwasher, sorting out an invasion of ants — and locking the back door.

Ian and Emma are the kind of people who always take their shoes off at the front door, unaware that they are still tracking all the invisible, grubby problems of human life into their own very ordinary home.

It was recently revealed that 2021 was the first year in recorded history when the majority of babies in England and Wales (51.3 per cent) were born out of wedlock. That commonly used word (in this context) ‘wedlock’ might itself reveal a reason.

Young people no longer think it so important to be ‘locked’ into marriage; solemn commitment is out of fashion.

Used to ‘hook-up’ culture (i.e. brief sexual encounters), too much choice about everything, and passing fads in health, food and fashion, they shy away from making solemn vows.

But they seem to have no problem about moving in together after a very short time. This, despite the fact that a Centre for Social Justice report in 2020 made the point that by the time their child is five, 53 per cent of unmarried parents will have split up, compared with 15 per cent of married ones.

Also despite the worrying truth that the life prospects for the children of married parents are much better than those of unmarried couples.

Yet a majority of young people seem to agree with Ian and Emma’s charming, pretty adopted daughter Jess. She says: ‘It’s just mad, isn’t it — marriage?’ and completely misunderstands what makes her parents tick — but allows her arrogant boyfriend to control her, then tells her mother she can imagine ‘spending the rest of her life’ with a waiter she has only just met.

You realise Jess hasn’t a clue about what it actually means to commit to somebody for a lifetime, to promise to be together, ‘for better, for worse’ — let alone support each other through all life’s troubles, until one of you is left alone.

Once upon a time, young people assumed this would be their life pattern, as it was for their parents. These days it’s not such an attractive prospect.

Will Golaszewski’s slow-moving TV drama put them off the institution still more? I suspect it will. If you are addicted to the glitz and glamour of Love Island, how on earth could you find a conjugal visit to B&Q remotely appealing?

Used to scrolling through ‘influencers’ on social media and marvelling at their clothes, homes and lifestyle, wouldn’t you pity the middle-aged couple in dreary clothes, with their ironing board in the hall?

Encouraged to ‘let it all hang out’, weaned on psychobabble about your ‘issues,’ won’t you feel repelled by the dishonest silences between a couple who smile brightly and say: ‘All good, yeah!’ to each other, while their hearts are full of quiet desperation?

Yet there is a vitally important four-letter word left out of that equation: LOVE. Because the deep affection between Ian and Emma is beyond words and defies speech. Their mutual need and passionate loyalty prove the truth of the old saying, ‘love is what you have been through with somebody’.

Poor shambling Ian, depressed after being made redundant, trying to fill his days, jealous of his wife’s horrible boss . . . he understands the truth about marriage. ‘It’s interesting the way young people talk about love,’ he tells Emma. ‘They always talk about the heat of it, don’t they.’

But when a couple has been together as long as they have, through good times and bad, they accept that the flames of passion will always subside, but love’s slow-burning ember can last for ever. That is what makes Marriage so tender.

Within a long marriage (and I’ve been lucky in both mine) the romance of those first months or years evolves, slowly but surely, into a sense of ‘you and me against the world’.

You might feel critical of your spouse, but just let anybody else dare to notice his or her faults!

One of the most moving moments in Marriage comes when Emma, who now sees her unpleasant young boss Jamie for what he is, proclaims what a ‘good person’ her husband is. She knows him.

He is the one who supported her through the loss of their baby son, who pushed through the adoption of their daughter, who was always there . . . ‘perfect, actually’.

When she tells her daughter, quite simply: ‘We looked after each other,’ that sentence is worth all the love poems and cheesy lyrics in the whole world.

Many years ago I was invited by a major London publisher to compile an anthology of writings on marriage. It was a dream commission, to be called From This Day Forward.

Looking back, I can regard that time of research as a sort of apprenticeship for writing my Saturday advice column in the Mail.

So many marriage problems. Such tolerance and accommodation necessary to survive. Such complexity — and yet all the wide reading taught me one simple, incontrovertible truth — that companionship is the secret of a happy union.

Not sex. Not excitement. Not glamour. When you become ‘a comfortable couple’ (to use a beautiful phrase from Charles Dickens) you realise that popping into B&Q, and bickering over which sort of chicken to buy really is the stuff of marriage. You choose to do things together because you don’t want to be apart — even if being together is sometimes as mundane as a night in front of the TV.

In 16th-century France the renowned philosopher-statesman Michel de Montaigne wrote this about the state of holy matrimony: ‘A good marriage, if such there be, rejects the company and conditions of love. It tries to reproduce those of friendship. It is a sweet association in life, full of constancy, trust and an infinite number of useful and solid services and mutual obligations.’

I was awed by how every nuance of friendship and frustration plays across the expressive faces of the actors, as their characters hold each other up through the remembrance of past grief into present anxiety and disappointment.

Ian and Emma are Everyman and Everywoman, locked into mutual needs which sometimes feel imprisoning — yet holding each other tightly in those hugs that are so much more meaningful than any sexual frisson.

Over the past 50 years, one-third of marriages have ended in divorce. But some people marry again, once or even twice, showing that hope never dies.

As somebody who loves being married and truly values the institution — and has written thousands of words on the subject — I would recommend any young couple in love to watch the four parts of Marriage and learn.

The lesson is not that married life is slow, tense, humdrum and full of tedious misunderstandings — although all that is true.

No. Marriage reveals how the long-lasting companionship between two adults can evolve into an unassailable beauty as bright as any diamond — and just as precious.