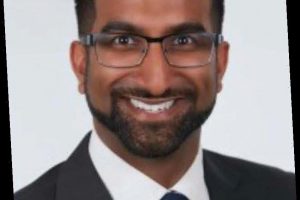 The loved ones of a University of Washington assistant professor are desperately searching for answers after it was announced he disappeared while on a recent solo hike.

Sam Dubal was reported missing on Oct. 12, just two days after he failed to return from his hike on the Mother Mountain Loop out of the Mowich Lake Trailhead in Washington's Mount Rainier National Park, according to a press release from the National Park Service.

Officials said Sam, 33, set out for the hike on Oct. 9 and was expected back the following day. However, when family members noticed that the Seattle resident had not returned, they contacted authorities.

Rangers at the national park immediately sent out search teams on the ground and in the air to find Sam but have been unable to spot him for more than 10 days, according to the press release.

In an update on Friday, officials said inclement weather had posed challenges for crews but they were continuing to survey the 17-mile loop trail and nearby terrain that includes "rugged, remote wilderness with dense forests at elevations from 2,000 to 5,000 feet" as best they could. On Wednesday, officials had to halt their efforts again due to weather, NBC affiliate KING-TV reported.

With conditions worsening at higher elevations, the search could be in jeopardy of coming to an end without any answers — but Sam's family told the local outlet they are refusing to give up.

"We cannot bear the thought of abandoning him during this survivable period," explained Sam's sister, Dena Dubal, who created an appeal to continue the search. "We are making a very strong plea to continue, a few more days, at least 72 hours."

In her petition on Change.org, Dena noted how she appreciated what the National Park Service has done thus far, but pleaded for them to continue their efforts for a little longer, as her brother had all the necessary equipment with him to survive.

"Sam has with him overnight gear, rain gear, and snow gear as well as a cell phone and a charger," she wrote. "He is a very fit and skilled hiker with tremendous experience including in the Himalayas. He was recently going thru a hiking book of the Seattle area and a few weeks ago completed a hike even harder than this one. He is experienced."

"There is HOPE. Sam is fit," she added of her brother, who she described as "a humble guy, a lover of nature, and someone who seeks to find goodness in everyone."

In a statement to KING-TV, a Parks Service spokesperson confirmed how the weather continues to create dangerous conditions for crews but said the mission will be re-evaluated on Friday.

A spokesperson for Mount Rainier National Park did not immediately respond to PEOPLE's request for comment.

Sam — who was described as 5 feet 9 inches tall and 155 lbs., with black hair, a short black beard and possibly wearing a blue jacket — taught in the University of Washington (UW)'s Department of Anthropology, the school said in a news release on their website.

"Sam's family is incredibly grateful for the messages of support and outreach from the UW community, and they, like us, maintain hope for his safe return," UW wrote.

His sister told KING-TV, "He is just an amazing and beloved guy who is a wonderful soul that we need here and we cannot abandon [him] during this critical time."

END_OF_DOCUMENT_TOKEN_TO_BE_REPLACED

END_OF_DOCUMENT_TOKEN_TO_BE_REPLACED
We and our partners use cookies on this site to improve our service, perform analytics, personalize advertising, measure advertising performance, and remember website preferences.Ok