Beoming GaryVee: Here’s How Gary Vaynerchuk Made His $200 Million Fortune 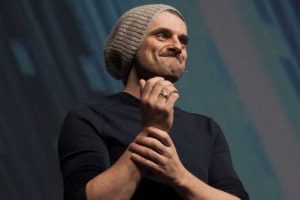 When you look into the life of some very rich and influential individuals, you tend to wonder how they made so much wealth. Well, that’s pretty normal, isn’t it? Wealth creation is something that every human needs to learn and to do that, it is pertinent to look into the lives of wealthy people and learn from them. So, if you’ve heard the name Gary Vee on the internet and wondered why he is so rich and influential, don’t worry, we got you! In this piece, we intimate you with the life of Gary Vaynerchuk and all he did to earn himself a net worth of $200 million. Grab your snacks for you’re about to read one of the most interesting journeys in the history of wealth creation!

RELATED: How Peet’s Coffee Became One of the Biggest Coffee Companies In The World

Who is Gary Vaynerchuk?

Born in Babruysk, Belarus on the 14th day of November 1975. He wouldn’t get to spend his childhood there as at the young age of 3 in 1978, he moved to the United States with his family. He grew up in Queensborough in New York before moving to Edison, New Jersey while still at the young age of 7.

Gary Vee was so industrious as a kid that he tried his hands at everything that could fetch him money so it is no surprise that he grew up to become an entrepreneur. As an exuberant 7-year-old, Gary started his own lemonade stand and he sold lemonades till he ventured into another business. He started selling baseball cards and he did that till he graduated high school, making thousands of dollars for himself in the process. He would later join his family’s wine business at the age of 14, helping his father bag ice for $2 per hour. He proceeded to Mount Ida College where he got a bachelor’s degree before going back to work at his father’s liquor store. This liquor store is the bedrock of his journey into winery.

After graduating college, Gary got a promotion that would see him oversee the daily operations of his father’s liquor store. Being internet savvy and a great lover of social media, he decided to leverage that to transform the liquor store into one of the first e-commerce platforms that dealt in anything alcohol. This paid off as the store’s revenue catapulted from about $3 million a year in 1998 to $60 million in 2003. Gary wouldn’t stop there though, in fact, he was just beginning. The next thing he did was to rename the store from “Shopper’s Discount Liquors” to “Wine Library” in 2006 He would go further to launch a long-form video YouTube channel called Wine Library TV where he churned out one episode per day over the course of 5 years which earned him a large amount of YouTube subscribers and social media followers. This enabled the growth of the business and his eloquence also earned him appearances on TV shows like Conan O’Brien and Ellen Degeneres.

Later in the future, Gary would start Empathy Wines with the aim of subsidizing the cost of wine without reducing the quality. This he did by cutting off importers, distributors, and retailers. He only had farmers and a winery and he shipped the wine directly to the consumers. By 2019, the company had sold over 15,000 cases of its California-sourced wine with well over 2000 subscribers buying off the internet. Empathy Wines was later acquired by Constellation Brands in 2019 for an undisclosed fee.

RELATED: These Are The Biggest Brands Owned By Bernard Arnault’s LVMH

The Birth of VaynerMedia

After dishing out 1000 episodes of YouTube videos on Wine Library TV, Gary Vaynerchuk thought it was time to close shop and try out a new venture. This gave birth to the creation of VaynerMedia with his brother in 2009. VaynerMedia focuses on consultations that helped a lot of large brands attain exponential growth by tapping into the great wealth of opportunities social media has to offer.

VaynerMedia was able to get the attention of many clients including NHL, PepsiCo, and General Electric who they helped to gain recognition and drive sales through paid media strategies, full-service creative, e-commerce, in-house consulting, influencer marketing, and many more. VaynerMedia started from a small conference room but it is no surprise that in 9 years, it grew to become a large company that has over 800 employees and provides services to some of the biggest brands in the world.

Being an eloquent speaker and leveraging a keynote speech he gave in NYC in 2008, Gary Vaynerchuk was able to land a $1 million book deal with Harper Collins. That deal gave birth to his first ever book, “Crush It!” which was released in 2009 and immediately became an international bestseller. He has gone ahead to write other books such as “Jab, Jab, Jab”, “Right Hook”, “Ask Gary Vee”, “Crushing It”, and “The Thank-You Economy”

Gary started Angel Investing soon after the release of his first book and his first investment was a $200,000 investment in Facebook as he had met and taken an immediate liking to Mark Zuckerberg. That investment fetched him millions and he would go on to invest in other brands like Twitter, Tumblr, Snap, and Venmo. Isn’t that amazing? So, you see, Gary Vee is not so much of a mystery. If he can do it, what’s stopping you?

READ NEXT: Here’s What Makes Vertu Phones So Expensive