Home » Lifestyle » Bianca’s Hearing Is Part Of Her ‘Creed 2’ Story, But It’s Not All Of It

Bianca’s Hearing Is Part Of Her ‘Creed 2’ Story, But It’s Not All Of It

Creed II takes Adonis Creed and Bianca Porter’s love story to the next level. But as things move forward for the couple, they each still have their separate careers and their own personal issues to contend with. In Creed II, Bianca’s hearing loss is a major part of her story as she continues with her singing career and confronts the fact that her hearing issue may be something she could pass down to her children.

In 2015’s Creed, Bianca, played by Tessa Thompson, is an unsigned singer working on recording an album at home while knowing that her hearing is deteriorating and that she’ll eventually go deaf. The character is a win for representation because of her hearing issue — she’s shown wearing a hearing aid in both films and she and Adonis (Michael B. Jordan) both know some sign language — and also a win when it comes to the way significant others are shown in movies focused on men, specifically athletes, because Bianca has her own career and interests.

Thompson was pleased to take on the role for both of those reasons. She told the Los Angeles Times in December 2015, "I’m sort of the benefactor of the fact that [Hollywood] is now interested in telling more rounded stories. That just wasn’t the case a while ago. As far as choices, there weren’t that many to make. So to play young women who are not just the object of the narrative but the subject of the narrative and nuanced and cool, that wasn’t really happening for women like me." 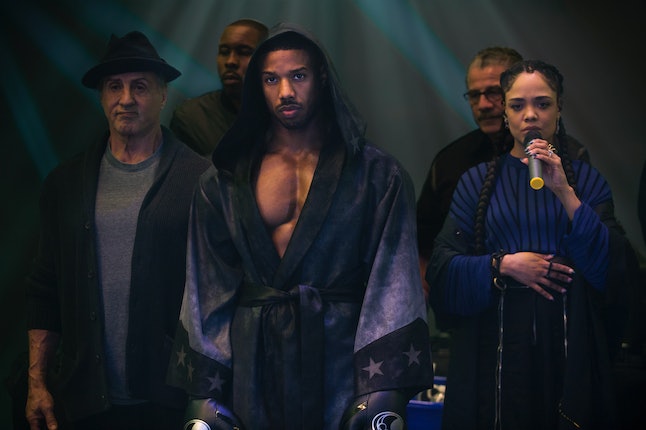 Spoilers for Creed II ahead. Bianca’s career moves continue into Creed II. She gets signed to a record label, is shown performing for a large audience — with Adonis also in attendance, because she doesn’t just go to his events — and also sings while he enters the arena ahead of his big fight. Her hearing is still deteriorating, but she doesn’t completely lose it in the movie.

And the way her hearing loss is shown is sensitive. In one scene early on, Adonis starts his speech to propose to her while Bianca is still in the bathroom after a shower and hasn’t put her hearing aid back on. It seems at first like this might be played purely for laughs — a man convinces himself to get really vulnerable and his girlfriend can’t even hear him. But instead, things take a more serious turn with Bianca realizing what happened and the couple coming together to discuss whether they’re really ready to get engaged. In an even more emotional scene later in the film, Bianca has to hold her and Adonis’ new baby while the little one undergoes a hearing test to see if she inherited Bianca’s impairment.

Thompson told the Los Angeles Times back in 2015 that she is "a proponent of people in their communities being able to tell their own stories," but took on the role because she knew it wouldn’t be exploitative. More recently, she told BET that her younger brother has hearing loss and that she spoke to him in order to prepare for the part. "My brother is 19 and he’s had hearing loss his whole life," she explained. "And working on this film this time around, the conversations that I had with him about it and really understanding it, I realized that there are so many questions I never asked him about his own experience even though I am so close to him."

Thompson also spoke to Tony-nominated actor Lauren Ridloff, who is deaf. "I was talking to her and she just wanted to make sure that I knew she’s really happy and lives a really rich life," Thompson told BET. "The truth is there are tons of people who don’t hear anything or do experience hearing loss and they do live rich awesome lives. I think it’s important particularly in media to reflect that, it doesn’t have to be a pained experience."

In Creed II, Bianca’s story isn’t one of a hard life dominated by her hearing loss, but it does show the emotions and hardships that come along with it. Thompson, the writers, and the director made sure of it.