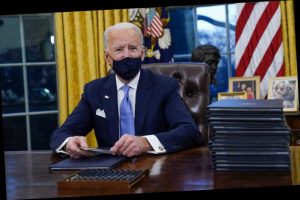 The pause on federal student loan payments that's been in place for almost a year now was extended through September by President Joe Biden in one of his first moves upon taking office on Wednesday.

Just hours after he was sworn in, Biden signed 17 executive actions, among them one that directed the acting secretary of education to extend the pause on payments and collections, and keep the interest rate at 0 percent.

"Too many Americans are struggling to pay for basic necessities and to provide for their families," a statement from the White House read. "They should not be forced to choose between paying their student loans and putting food on the table."

Though the pause has been in place since last March, this action will extend it through Sept. 30.

"This is really important," Jessica Thompson, associate vice president of the Institute for College Access & Success, told the Washington Post. "It allows borrows to take a sigh of relief, [and] get out of this cycle for being reliant on the current politics of the day determining whether they're going to have to start paying again."

All interest rates for borrowers with federally held student loans were set to 0 percent back in March, and at the time, borrowers were given the option to suspend payments for at least two months amid the coronavirus crisis.

When Congress passed the Cares Act, it made the suspended payments automatic, a move that was twice extended by the Trump administration. Those extensions, however, were set to expire at the end of January.

The federal student loan debt reached nearly $1.6 trillion last year, per the Federal Reserve Bank of New York, and according to the U.S. Department of Education, the average student loan borrowers owe between $200 and $299 each month, CBS News reported.

The outlet reported that Biden has supported Congressional action to cancel $10,000 of federal student debt per borrower, though that plan is still more conservative than those of Democratic Senators like Elizabeth Warren and Bernie Sanders, who have pushed for forgiveness of up to $50,000 in debt, and all of it, respectively.

Brian Deese, the incoming director of the National Economic Council, has said the Biden administration supports forgiving up to $10,000 in debt per person, according to the Post, while incoming Senate Majority Leader Chuck Schumer has also supported debt cancelation.

The more than 7 million borrowers whose federal loans are held by private companies or universities remain excluded from the paused payments and 0 percent interest rate, according to the Post.