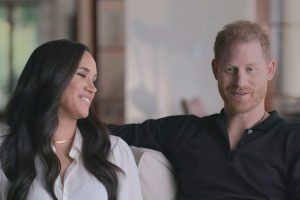 The second volume of Prince Harry and Meghan Markle's Netflix documentary series Harry & Meghan has been released today, and the couple have dropped many bombshells about their time as senior royals.

William 'screamed and shouted at Harry' during meeting

Prince Harry has claimed his brother Prince William "screamed and shouted" at him during a meeting about his and wife Meghan's future way of working.

"It was terrifying to have my brother scream and shout at me, and my father say things that just simply weren't true, and my grandmother, you know, quietly sit there, and sort of take it all in," said Harry.

"But you have to understand that, from the family's perspective, especially from hers, there are ways of doing things, and her ultimate sort of mission, goal, slash responsibility is the institution.

"People around her are telling her, 'By the way, that proposal, or these two doing is going to be seen as an attack on the institution.'

"Then she's gonna go on the advice that she's given. It was really hard."

The meeting took place at Sandringham in early 2020 and Meghan was not invited.

"It was clear they planned it so you weren't in the room," Harry tells Meghan in the series.

Harry said the meeting ended without a "solidified action plan."

"I think, from their perspective, they had to believe that it was more about us, and maybe the issues that we had, as opposed to their partner, the media, and themselves, and that relationship that was causing so much pain for us," he said.

"They saw what they wanted to see."

The Duchess of Sussex has revealed that it was the late Queen Elizabeth II and then-Prince Charles who suggested she write to her father following their estrangement.

She said: "I reached out to her Majesty and said this is what's going on, what do you want me to do? I want to… Whatever advice you have.

"But ultimately it was suggested by the Queen and the Prince of Wales that I write my dad a letter and i had gone to great lengths to get that letter to my dad discreetly."

Meghan revealed she wanted to "go somewhere" to get help but said she wasn't allowed to.

"They were worried about how it would look for the institution," she said.

Prince Harry says they knew how bad it was and thought "why can't she just deal with it?"

"It was as if to say, 'Well, you know, everybody else has dealt with it, why can't she deal with it?'

He added: "But this was different."

After the couple's now-infamous sit-down interview with Oprah Winfrey, which aired in March 2021, Beyonce texted Meghan, lending her support to the Duchess.

In the text, Beyonce told Meghan she "wants her to be protected and respects her bravery."