Home » Lifestyle » Bill Hader Reflects on Richie and Eddie's Romance in 'IT': 'This Is the Person I Love. It’s Truly Love'

Bill Hader Reflects on Richie and Eddie's Romance in 'IT': 'This Is the Person I Love. It’s Truly Love' 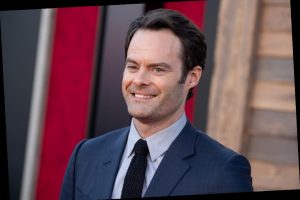 For lukewarm fans of IT Chapter 2, they might be scratching their heads as to what this “Reddie” business is. “Reddie” is the fan-made couple’s name representing Richie Tozier and Eddie Kaspbrak’s relationship. Fans of this “ship” have been around since the 1980s after Stephen King’s novel was released to the bookstands. Their anticipated romance isn’t far-fetched either, considering the frequent flirtation between the two characters in the book.

So when IT Chapter 2 finally made their relationship canon, fans were utterly ecstatic. And according to Bill Hader, an essential “Reddie” scene exposes how tender his feelings are for Eddie.

What does Stephen King think about the gay twist in ‘IT Chapter 2’?

In the novel, it was never the author’s intention to create a romantic dynamic between Richie and Eddie. As much as Richie shares a beautiful affection for Eddie in the novel, King insists that he didn’t intend their relationship to be anything more than a special friendship. But even so, he considers the film’s romantic twist between the characters to be “genius.”

He told Vanity Fair, “It’s one of those things that’s kind of genius because it echoes the beginning. It comes full circle.”

He is referring to the opening scene in both his novel and IT Chapter 2. In the scene, there is a gay couple who must face Derry’s homophobic bullies as well as Pennywise himself. One of the men, Adrian, has asthma (just like Eddie.) So to King, the idea of “Reddie” made everything in the story sufficiently come full circle.

He continued, saying, “At least there’s love involved. Somebody cares for [Eddie,]” King said, “and that echoes the love that Adrian’s partner has for him. So that was cool.”

One reaction to Eddie’s death exposed Richie’s complete denial. He refused to believe that his first love was gone. And following that final realization was a moment of genuine affection between the two characters.

He told The New York Times,

“We did a lot of different versions of Eddie’s death scene…We did one where he’s clearly dead, and I’m refusing to recognize it. And somewhere I was very tender with him, where I’m caressing his face — this is the person I love, and it wasn’t just lust. It’s truly love.”

He said, “I was knowing on some level that I loved him. It’s something Richie can’t connect to, so he has to hate that thing. It’s very adolescent. ‘I have a crush on you, but I don’t want to tell you that, so I’m going to push you away. But man, if he made the first move, that’d be the best thing ever.’”

END_OF_DOCUMENT_TOKEN_TO_BE_REPLACED

END_OF_DOCUMENT_TOKEN_TO_BE_REPLACED
We and our partners use cookies on this site to improve our service, perform analytics, personalize advertising, measure advertising performance, and remember website preferences.Ok