Billie Eilish, the 17-year-old singer currently topping charts around the world, has taken to social media after she was allegedly groped during a meet-and-greet at Sydney's Hordern Pavilion.

The Ocean Eyes singer, who headlined this year's Groovin the Moo festival, says she was grabbed on the chest by a female fan during her Australian tour on Tuesday night. 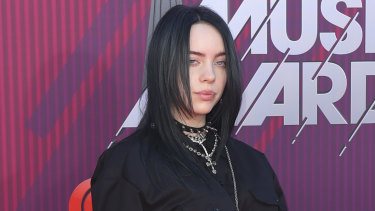 Billie Eilish at the iHeartRadio Music Awards in March this year.Credit:Jordan Strauss/Invision/AP

"Pls don’t grab my boobs in the meet & greet," she wrote on Instagram. "Keep playing the s–t cool but it is very much not."

Eilish alluded that the incident was making her reconsider her meet-and-greet opportunities, writing that some fans make it "very difficult" for her to "feel comfortable" enough to do them. 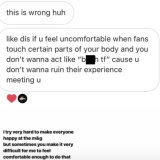 Billie Eilish takes to social media to discuss an incident where she was allegedly groped in a Sydney meet and greet.Credit: Photo via Instagram/wherearetheavocados

She wrote she "acted like" she was unaware what the fan was doing as she "didn't want to make her feel bad," unsure if the grope was "just an accident".

Fans were quick to rush to Eilish's defence,  pointing out that she is still legally a minor at the age of 17.

"This is disgusting," a fan wrote. "Billie has had to address not [touching] her and [being] inappropriate at the meet and greets several times."

Eilish has since deleted the posts after fans began attacking a female, whom they believed to be the alleged culprit, online. 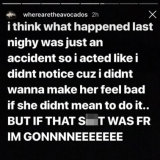 It is unclear whether the incident was an accident or not. Credit:Photo via Instagram/wherearetheavocados

The singer announced her Australian tour back in February, timed in line with the release of her debut album, When We All Fall Asleep, Where Do We Go?

The album quickly rose to number one in Australia after its release on March 29.

Kicking off her tour with the headline spot at Groovin the Moo, Eilish moved onto her sold-out solo show in Sydney on Tuesday, before continuing to Melbourne's Margaret Court Arena, Brisbane's Eaton Hill and Fremantle’s Fremantle Arts Centre over the coming weeks.

END_OF_DOCUMENT_TOKEN_TO_BE_REPLACED

END_OF_DOCUMENT_TOKEN_TO_BE_REPLACED
We and our partners use cookies on this site to improve our service, perform analytics, personalize advertising, measure advertising performance, and remember website preferences.Ok