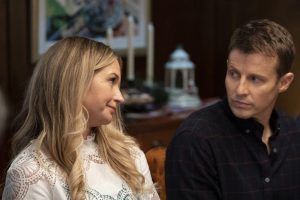 It’s not surprising Jamie Reagan (Will Estes) would want to protect his wife. Blue Bloods showed her getting hurt and Jamie getting revenge. This is how fans are reacting to the episode.

Eddie Reagan was attacked by Tommy Simms on ‘Blue Bloods’

Witten and another officer wanted to fight back. But Eddie didn’t think it was right and stopped it. Tommy was arrested, then released. He then attacked Eddie when she was leaving work and getting into her car.

Eddie got a nasty black eye and busted lip from the attack. The Reagans were shocked to see her face at dinner. They started arguing about the new bail laws, and she stopped them.

Danny gave Jamie advice on how to handle it

Danny (Donnie Wahlberg) and Jamie also talked about the incident. Danny told his little brother that the attack isn’t his fault. But Jamie doesn’t believe that since he’s Eddie’s supervisor and didn’t handle it himself.

Danny also reminded Jamie that he doesn’t “roll” that way anyway. Jamie asked Danny what he would do if it were Linda (Amy Carlson). “In the old days, I would’ve thrown him off a roof,” he answered. Danny says things changed, and Jamie shouldn’t make this personal.

The episode ended with Jamie and Eddie facing Tommy one last time. Eddie wanted to turn back, but Jamie told her Tommy has a beating coming.

He then goes up to Tommy and his friends. “That information that you gave us so you can walk? It all checked out,” Jamie told him. He lied and said Tommy ratted out dealers, and his friends weren’t happy about that. Eddie and Jamie walk away, and Tommy starts getting jumped.

Fans are happy with how Jamie handled the situation. “Alright Jamie takes care of business,” one fan wrote on Instagram. “Yes. Taking lessons from his older brother,” another one wrote. Danny certainly would outsmart an attacker if not use actual force on them.

“Love how Jamie took care of the guy that hit Eddie. Such a protective Sergeant and husband,” another fan wrote. The married couple doesn’t get to work together as much anymore, so it was a rare moment of them protecting each other again.