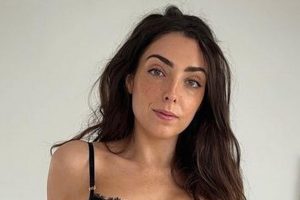 However, the influencer, who boasts 504,000 Instagram followers, was forced to take to the site to answer back to cruel trolls.

Nelly took to her Instagram stories to reveal some of the vile messages she'd been sent online lately.

READ MORE: Model warns fans of 'furry surprise' as she strips down to skimpy underwear

These included messages from people saying she 'made them feel sick' and who said her body was 'disgusting'.

However the stunner, who previously made headlines with her 'realistic' bikini picture, had the perfect response as she danced around in her gym wear and laughed off the messages.

Talking to fans, Nelly started off by writing: "A private online viewing of just some of my recent DMs and comments. Strap yourself in people!"

The first read: "You make me sick," as Nelly replied: "Starting basic, simple and to the point, thanks boo."

While another person had written: "I am sorry but this is disgusting. Your face is beautiful but your body is… every woman has something to hide. Stop showing it like it's so wonderful."

A third asked her: "Why would they choose you as a model? Genuine question x," as Nelly wrote back: "Not sure hun, not sure."

While a fourth, who appeared to be referring to her boyfriend, said: "He'll break up with you if you keep gaining weight at the rate you are," as Nelly responded: "I should probably start looking for somewhere else to live then, s**t, where's my laptop?"

After sharing the messages, Nelly revealed many fans had checked up on her to see if she was okay, but she said she had been "laughing off" the comments.

She said: "You've got to laugh haven't you, but honestly I'm really okay and very much used to it.

"I think I just fancied a little boogie.

"Thank you so much for checking in though, I will take the weird messages all day every day if it means I can still be here doing this x."