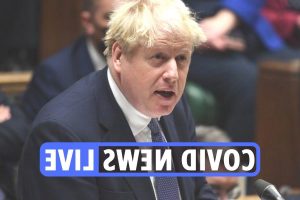 You can watch the PM facing questions about the scandal live on this page by clicking the video above.

Ahead of taking questions, Mr Johnson made a statement saying he wanted to apologise for wrongdoings at Number 10, but tried to claim he thought he thought he was at a work event when he attended the booze-fuelled party.

Labour leader Sir Keir Starmer branded the apology "ridiculous" and "insulting", accused the Prime Minister of "lying through his teeth" and urged him to resign.

He added that Boris is "a man without shame" and raised cases from how the public were separated from their loved ones at the height of lockdown while alcohol-fuelled parties were secretly held at the heart of government.

The Prime Minister will also face calls from his own party to admit how many of the parties he attended himself and to try to nip the scandal in the bud by simply apologising rather than dodging questions.