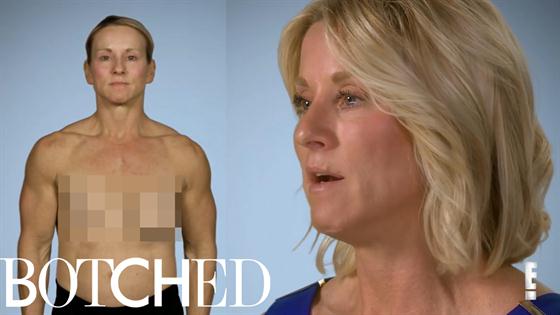 Sometimes two really is better than one.

In this clip from Wednesday’s new Botched episode, an athletically-inclined patient named Paula hopes Drs. Terry Dubrow and Paul Nassif can help repair her sunken right breast, which has been giving her grief for the better part of three years now.

“I’m from New England,” Paula jokes in the clip, “and the only Deflategate was my breast.”

Deflation may or may not fly in football, but it definitely doesn’t pair well with boob jobs. As the fitness junkie goes on to explain, what began as a harmless attempt to restore her C-cups (after having breast-fed two kids and subsequently lost 30 pounds) resulted in quite the opposite. At first, “they looked pretty good,” she remembers. But, once the swelling started to fade, so too did Paula’s implants.

“The implants sat sort of in the middle of my chest,” Paula tells the camera. “And then, the skin hung off the sides. The implants just sort of looked like they were plopped.” And, even though she returned for several repeat surgeries, none were able to remedy the initial damage — especially to her right breast. “Over a three-year time span, I had the original surgery and four revisions,” she says. “So, five surgeries. And none of them ended with a good result.”

Think Dr. Dubrow is the man for the job? Learn more about Paula’s asymmetrical implants in the clip above!

Watch a new episode of Botched Wednesday at 9 p.m., only on E!