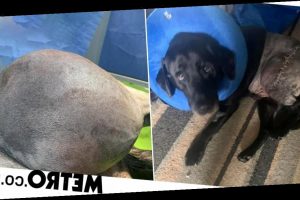 A Labrador is on the mend after he had an operation to remove a lump the size of a football that weighed almost half a stone.

Nine-year-old Bouncer was under the knife for over 90 minutes to have the whopping 3.3kg (6.6lbs) tumour extracted from his hip and back leg.

He had developed a small lump towards the back end of last year, but his owner Zoe McNulty, 37, rushed him to vets in June after she noticed it suddenly swelled up.

Zoe, who has had Bouncer for eight years, said the lump was not appearing to cause him any pain or difficulties.

But it grew rapidly and he collapsed after a walk on the beach, so she made an emergency appointment at the vets.

Vets took a biopsy of the lump and found a benign lipoma, a tumour of fat normally seen in middle-aged or older pets.

The collection of fat cells can form just under the skin on any part of the body.

Lipomas are quite common in dogs and affect one in 50 every year, but their large size and rapid growth often causes great concern for owners.

Zoe, a mother-of-four, said: ‘We were scared as the lump had grown so suddenly, but government guidelines meant unless it was an emergency, we could not go to the vets at that time.

‘It was so hard to watch the growth getting bigger.

‘They told us to keep monitoring the situation, which we did, and it just kept growing.

‘My youngest children have grown up with Bouncer and they were very scared.’

Zoe says Bouncer is usually a lively dog and they were worried when he wasn’t eating or walking properly.

In June, the team at White Cross Vets in Bradford recommended surgical removal of the lump and Bouncer then went under the knife.

Zoe added: ‘We were so relieved when the vets called to tell us everything had gone to plan.

‘The children were spending as much time as they could with him as we didn’t know if he would make it, we were almost planning to say our last goodbyes.

‘We couldn’t believe how quickly he recovered from the operation – within a few hours he was back to his normal bouncy self – just with a very big scar.

‘He’s got a few more of these lumps, which are quite common in Labradors, but hopefully they won’t grow as this one did.’

Zoe said the operation has given Bouncer a new lease of life and he is back to his old self again and enjoying four or five walks per day.

Vet Anita Fox added: ‘It was good news as it was a benign lipoma.

‘Due to the location of the lipoma we thought it would be a very time-intensive operation, taking around three hours.

‘Weighing in at a staggering 3.3kg, it’s the largest lipoma I have ever seen.’