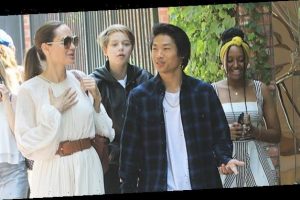 Brad Pitt and Angelina Jolie will both call numerous witnesses in their upcoming custody trial, but their kids will likely be kept off the stand. Here’s why.

It’s been four years since Angelina Jolie, 45, filed for divorce from Brad Pitt, 56, and their custody battle still isn’t settled. The former couple is set to face off in court very soon and recent documents, obtained by HollywoodLife, include a long list of witnesses on either side. Notably absent from both their lists are the names of their six kids: Maddox, 19, Pax, 16, Zahara, 15, Shiloh, 14, and twins Knox and Vivienne, 12.

“Generally speaking children don’t go on the stand,” divorce attorney Raoul Felder, explains EXCLUSIVELY to HollywoodLife. “If it is necessary [to hear their side] the judge may interview them privately. Judges are very experienced at talking to children, but they hate it because no matter how nice the judge is, it’s an ordeal for the child. The child is in a strange place, in a big stone building with people with guns walking around in uniforms and they have to see their mother or father at different tables. It’s just a terrible way to proceed and I really think the judge [in Brad and Angelina’s case] is not going to permit it, certainly not at this stage in the proceedings.”

Although Brad and Angelina’s four eldest kids — Maddox, Pax, Zahara and Shiloh — are technically at the age where they could be called to testify, Los Angeles family lawyer Kelly Chang Rickert, says it never happens. “Family Code 3042 sets a minimum age of 14 for kids to be able to testify. But kids never testify in court. First of all, judges hate putting kids in the middle. Kids should be having fun at school, not testifying against a parent in court. And secondly it’s considered bad legal practice to put kids on the stand. Usually, a minor’s counsel or a custody evaluator is appointed to tell the court about the children’s needs and desires. So, a minor’s counsel is an attorney for the minor. In this case, the children all likely have minor’s counsel so it will go through them.”

Another thing that Raoul Felder, a partner at Stutman Stutman Lichtenstein & Felder, says the courts won’t allow is for Angelina to move out of the country with the children. “It’s a no, no, and [pushing for that] could cause her to lose custody. That doesn’t play well. Sure, if you’re talking about a vacation, or if she wants to take them somewhere for the summer, that’s a different story. But if she wants to live somewhere else with their kids the judge will say, very frequently, this is America, you can go wherever you want to live but you’re not going to take the children with you. Not to a war zone, or so far away that the husband has to do somersaults to see his kids.”

The custody trial between the two superstars was set to start on October 6 in an L.A. courtroom but it was delayed due to issues over their private judge. Angelina is petitioning to have the judge replaced because she and her team have concerns about impartiality. Although she and Brad hired Judge John W. Ouderkirk to oversee their case she filed paperwork in Los Angeles Superior Court, arguing that he had “failed to disclose the cases that demonstrated the current, ongoing, repeat-customer relationship between the judge and [Brad’s] counsel.”

It’s been reported that Angelina recently lost her bid to have the judge removed, but sources close to Brad tell HollywoodLife EXCLUSIVELY that no decision has been made and that’s the reason for the most recent delay in the trial. And, while Brad has claimed his ex’s “Hail Mary filing,” will negatively effect their kids, her petition is within her legal rights, says Raoul Felder. “In California they have a rule that you are allowed a certain number of times, very few times, to request a different judge. So that’s what it may be. Her lawyers, who I gather are very experienced, may have sized something up in this judge that they didn’t like. Today, with computers you can find out how judges have ruled in similar cases. And you may find out, as lawyers say, oh he’s a husband’s judge…they are biased towards the fathers. And if you look a little deeper maybe it’s because they had a miserable marriage and a bad divorce themselves. So you have to know so many things, so many balls are in the air, this is not a game for amateurs.”

In all the back and forth, one thing that is clear, says Kelly Chang Rickert, of Purpose Driven Lawyers, is that this custody case has dragged on several years longer than most. “Four years is a very long time to fight over children,” she says. “Arguably you could go on for 18 years because theoretically you could still be fighting until the kids turn into adults, but four years is a very long time to fight over custody. It’s normally only the very contested custody cases that last four years, the ones that require evaluation upon evaluation and minors counsel for a lot of different parties. And this definitely fits that category. I would say it’s a very contested custody case because typically the average couple does not fight over custody this long because they do not have the funds. In most cases custody is wrapped up in under two year.”

END_OF_DOCUMENT_TOKEN_TO_BE_REPLACED

END_OF_DOCUMENT_TOKEN_TO_BE_REPLACED
We and our partners use cookies on this site to improve our service, perform analytics, personalize advertising, measure advertising performance, and remember website preferences.Ok