Breakout Actor Tahar Rahim on His Most Challenging Roles Yet 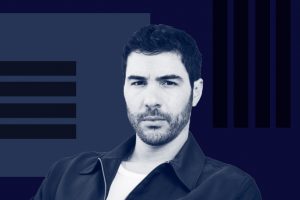 The film that changed his life was Jacques Audiard’s crime drama “A Prophet,” winner of Cannes’ Grand Prix award in 2009. Remarkably, it was Rahim’s first feature.

“Long live French cinema,” Rahim said on stage a year later at France’s prestigious César Awards, stunned after receiving both Best Male Actor and Most Promising Actor for the role — a first in the show’s history. The 39-year-old, then 28, had also taken home Best Actor at the European Film Awards.

Rahim played the hypnotizing protagonist Malik El Djebena, a young inmate navigating the structure, hierarchy — and savageness — of prison. “A Prophet” brought him immediate recognition, impacting his career as well as the trajectory of his personal life. In 2010, he married fellow French actor Leïla Bekhti, who played his wife in the film. (The celebrity couple, both of Algerian descent, share a son and daughter.)

Applauded by critics, Rahim has been called the French Al Pacino. What stands Rahim apart is that, unlike many French actors, he hasn’t been confined to French cinema. It’s partly thanks to his knack for languages — he’s fluent in English and doesn’t have a stereotypical French accent, though he was born and raised in the Belfort region of France.

Since his debut, he’s been in close to 30 projects, working with a list of international film directors and show creators — including French duo Olivier Nakache and Éric Toledano; Japan’s Kiyoshi Kurosawa; Iran’s Asghar Farhadi, and England’s Jack Thorne. In the U.S., Rahim’s Hollywood experience kicked off early on with “The Eagle,” the 2011 drama directed by Kevin Macdonald. He’s since been in “Mary Magdalene,” opposite Rooney Mara and Joaquin Phoenix; Hulu’s “The Looming Tower” with Jeff Daniels; Lone Scherfig’s “The Kindness of Strangers,” and Netflix’s multilingual miniseries “The Eddy,” out last year.

His latest project is “The Serpent” — premiering today — a limited series, coproduced by BBC One and Netflix, in which he plays 1970s French serial killer Charles Sobhraj alongside Jenna Coleman. He also stars in “The Mauritanian” with Jodie Foster and Shailene Woodley, out now. Rahim reunited with Macdonald for the latter, taking on the role of Mohamedou Ould Slahi, a Muslim man and the author of the 2015 prison memoir “Guantanamo Diary” who was tortured while detained for 14 years in Guantanamo Bay without charge. After a long and harrowing battle, he was freed in 2016. The part earned Rahim his first Golden Globe nomination, and he’s up for Best Actor in a Leading Role at the upcoming BAFTAs on April 10.

Tahar Rahim as Mohamedou Ould Slahi in “The Mauritanian.” Courtesy of STX Entertainment

Here, calling from Paris, Rahim dives into his experiences on the two projects and discusses what’s next.

WWD: Both of these roles are similar in that you’re portraying real people, and there’s a responsibility there. But, of course, the two characters couldn’t be more different. Starting with “The Mauritanian,” after sitting with the script and book for two years, what was it like meeting Mohamedou for the first time? Was it over video while you were filming “The Serpent”?

Tahar Rahim: Yes, I was shooting in Thailand, so we met thanks to Skype. It was an amazing moment. I expected to meet someone full of maybe resentment, maybe anger, and it was the exact opposite. I mean, the man has life. He’s rooting for forgiveness, for peace, and he’s cracking jokes all the time, asking about you, your family, playing music, singing songs. It’s almost unbelievable that he’s been through this horrific ordeal.

WWD: How did you approach the interaction?

T.R.: I didn’t want to show up and talk [to Slahi] like an actor who’s working on a part, you know, like, “How long have you been there? And what happened to you?” Everything was in the book. I had to ask him some questions, and when it came to the touchy questions and torture, he suddenly changed physically. And then I realized that the trauma was still there. He managed somehow to hide it or to just live with it. I felt that, and I stopped talking about it. We started to share simple chitchat, conversations about life. We really befriended. And over the course of our conversations, I could observe him, the way he talks, the way he answers questions, because that was an important part to me. And he’s got a big sense of humor. I wanted to catch it, his spirit, his goodness.

WWD: How was the first day on set?

T.R.: The first day of shooting is a whole different story. What happened is that Jodie [Foster] got sick, and she had to postpone her first day of shooting. Usually, the schedule is made in a way so you can settle in slowly. Since she was sick, Kevin came to me and he said, “Listen, we’re going to start the first day of shooting with your monologue, the last one.” And I’m like, “Oh man.” And he’s like, “Yeah, sorry. We don’t have a choice.” I’m like, “How can I portray what he’s been through in Guantanamo, the torture, his philosophy, all of it, the first day?” There’s a line in this monologue, saying, “I always wanted to be in a courtroom, and now that I’m here, I’m scared to death.” That was exactly what I was feeling. I always wanted to be in those type of movies, playing with great actors, and now that I’m here, I’m scared to death. So I just showed up and played with genuine feelings, and it helped me a lot to dive in. That set the tone, that very day.

WWD: How did you find the mind-set to immerse yourself in the intense torture scenes?

T.R.: To get in there, it was very difficult. Why recreate when you can create? So I needed to get as close as possible to his actual condition. I asked them to shackle me with real shackles, to turn the cells as cold as possible, to waterboard me for real. I wouldn’t put myself in danger. We had a coach in case it could be too dangerous. But Kevin started to get worried, because I had some bruises on my ankles. I was very weak. I went on a very drastic diet. I lost 10 kilos in a short amount of time. I’m like, “Man, listen, don’t worry. I know exactly what I’m doing, but I need to go deeper and deeper, out of respect to Mohamedou, to the people who are still living this and for the audience.” Sometimes when you’re an actor, suffering feels good, because you’re looking for the truth. It’s very hard to reach it. And this time I felt like I was touching it.

WWD: How do you step out of it once you’re done shooting?

T.R.: It’s the first time of my acting life that I found it very, very difficult to get out. I couldn’t get out of my character for at least three weeks. I can’t explain why, but it happened.

WWD: Didn’t you head back to filming “The Serpent” at the end of those three weeks? What was that transition like?

T.R.: A strange mental gymnastics. Going from [serial killer] Charles [Sobhraj] to Mohamedou is almost a treat [laughs]. But the other way around is more difficult. I asked the production to send me some edited episodes and footage, so I could get back to Charles. It helped me to get back to it. And I had to put on weight again to fit with Charles’ physicality. It was a bit of a rollercoaster.

WWD: You’ve said you approached playing Charles with a cobra in mind, since you had a hard time relating to the character. Where did the idea come from?

T.R.: When I was in theater school, you got 50 questions that you had to answer before you started building your character. Over the course of my career, I realized that only five or 10 would be enough, otherwise you start to think too much, you overthink. And there was this question, “What is the animal of your character?” And I remembered that Robert De Niro did that in “Taxi Driver,” which is one of my favorite movies ever. And he picked the crab. Now, if you remember the movie, each time he’d talk to someone or approach someone, he would come on the side. It’s very subtle, and it worked. Of course, the animal I wanted to pick was a snake. I mean, his nickname is the serpent. The cobra has to deal with charm. There’s the flute, the dance and something hypnotic and cold. I watched documentaries, and a cobra, when he starts to hunt his prey, he’s very slow, very subtle. Then he waits. And then he bites very quickly. And it’s done. I felt like it was the right animal to pick. 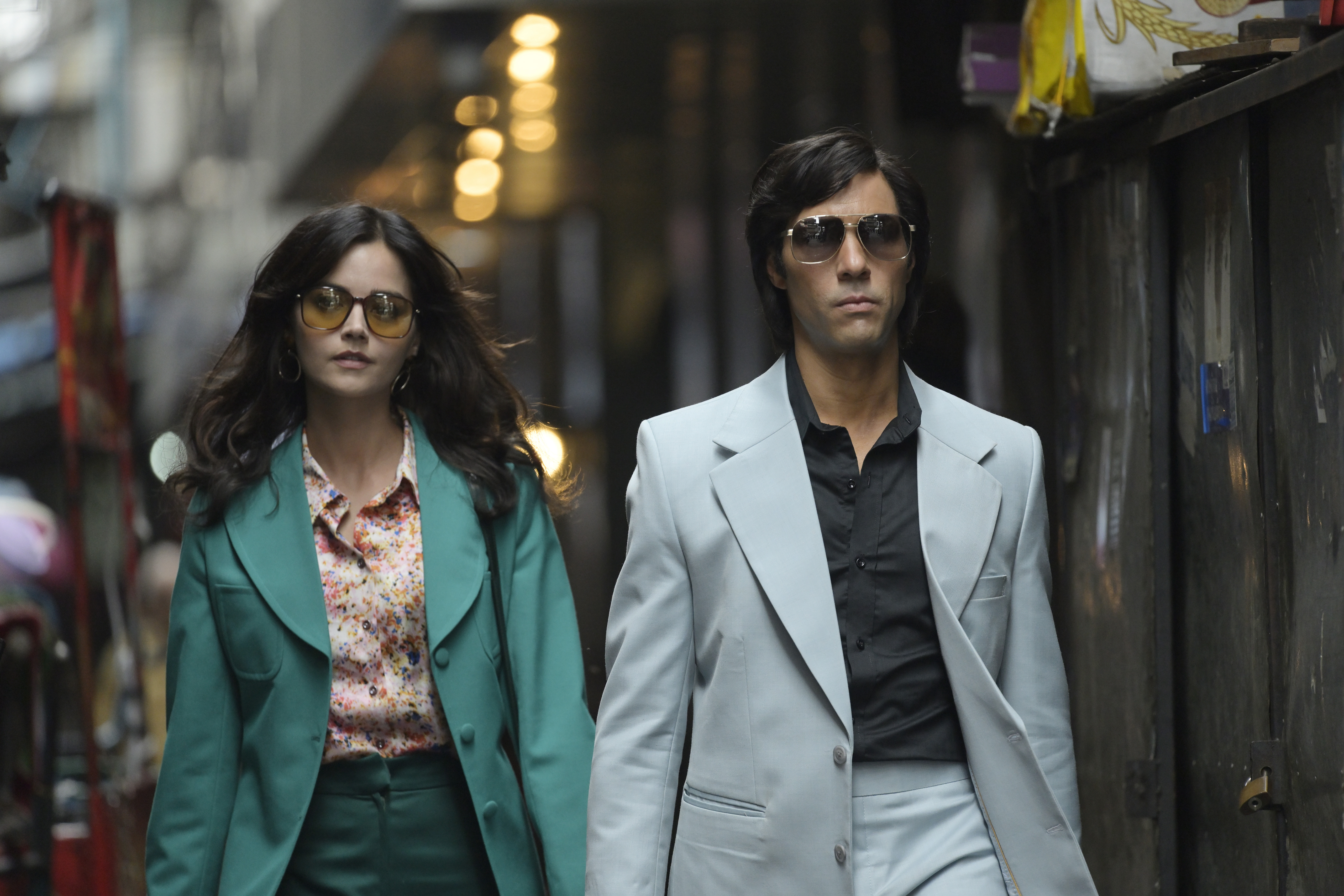 Actors Jenna Coleman as Marie-Andrée Leclerc and Tahar Rahim as con man and killer Charles Sobhraj in “The Serpent,” out today on Netflix. Courtesy of BBC/Mammoth Screen

WWD: What are you working on now? Is it true that it’s a musical?

T.R.: Yes, it’s a musical, but not made in the old-fashioned Hollywood way, meaning performances. It’s more poetic, more subtle. It’s a beautiful love story. It’s the story of an actor who’s playing [Molière’s] Don Juan all his life. His wife dumped him, and he’s trying to find her in every single woman he meets over the course of the movie, so the actress will play all the women. It’s a good concept.

WWD: Is there another Netflix project in the works, too?

T.R.: With Cédric Jimenez, we have a project. I don’t know when. It’s about the two Corsican brothers who, in a way, created what we call the “French Connection,” [the heroin network].

WWD: What has it been like experiencing recognition right now for “The Mauritanian,” but virtually amid the pandemic, like appearing on video from France at the Globes? [Rahim wore a bespoke Louis Vuitton suit for the ceremony.]

T.R.: On the one hand, it’s good, and on the other, it’s not good. This is what I call candy time. Usually, you’ve been working so hard, and you want to meet the audience and be connected to people, share good times, have dinner, have fun. This is a bummer. But on the other hand, I had the opportunity to do it with my family and my close friends, which would never happen if I had to travel. And I could wear my slippers.