Brendan Morais’ Quote About Leaving ‘The Bachelorette’ Is So Honest 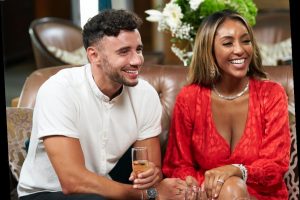 Just a week after Tayshia Adams unexpectedly broke up with Ben Smith, fans said goodbye to another frontrunner during the Dec. 21 episode of The Bachelorette, and no, I don’t think he’ll be coming back like Smith did. Brendan Morais’ quote about leaving The Bachelorette on the Bachelor Happy Hour podcast got so real — mostly because hosts Rachel Lindsay and Becca Kufrin really put him in the hot seat. And though he already got candid with Adams during the Dec. 21 episode, Morais went into more detail when asked about his decision to self-eliminate following their Neil Lane ring-shopping date.

According to Morais, he "self-sabotaged the moment," and though he "still wrestles" with his decision, he felt he made the right one for both Adams and himself. "I was protecting myself in a sense," he told Lindsay and Kufrin. "I was protecting myself from getting hurt. And as corny as that is, as stupid as it sounds, I have been married before and I feel like it would be a disservice to Tayshia, in a way, if I went into an engagement and I got down on one knee and I wasn’t completely, 100% all in and ready." Honestly, fair.

Apparently, it wasn’t just the ring-shopping date that changed Morais’ mind. On the podcast, he admitted "it was probably a day or two after the hometown date" when he started to feel some doubts. "I was truly, genuinely, with every fiber of my being, trying to see if this could work for me," he said. "And before taking it into the Fantasy Suite portion of the date and the journey and before having an intimate moment with Tayshia and before taking it to that next level, I came to the realization that I don’t know if I’ll be able to get down on one knee at the end of this."

But Lindsay wasn’t about to let Morais off easy. She still wanted to know why he participated in the show in the first place if he wasn’t prepared to propose. His answer: "I never promised Tayshia, or promised anyone, that I was going to be able to get there." He continued, "I think it was, as a whole, it would appear to be a selfish move on my part of how things ended. And again, you might not be able to look at it in this way and it’s obviously for everyone’s judgment and opinion it, but I was trying to be as selfless as possible as far as not taking this to the very end with Tayshia and informing her of [my doubts] then."

According to Morais, he went into the show open to the possibility of finding a wife, but as the season finale neared, he knew he wasn’t ready to pop the question. "I was going to give those moments everything I had and commit to them 100%, and I was going to see if it worked for me, and see if I could really, genuinely fall in love," he said. "And I really did grow strong, strong feelings for this amazing, beautiful woman, but unfortunately, I wasn’t able to completely commit to going down on one knee."

Though he said he completely understands "any backlash that might come" his way, I personally found his honesty pretty refreshing. Here’s hoping Morais does find his happily-ever-after in his own time.

END_OF_DOCUMENT_TOKEN_TO_BE_REPLACED

END_OF_DOCUMENT_TOKEN_TO_BE_REPLACED
We and our partners use cookies on this site to improve our service, perform analytics, personalize advertising, measure advertising performance, and remember website preferences.Ok