Home » Lifestyle » Bridal Bliss: Six-Footers Kimberly And Torrey Said "I Do" In Montego Bay With A Fiery Fête

Bridal Bliss: Six-Footers Kimberly And Torrey Said "I Do" In Montego Bay With A Fiery Fête 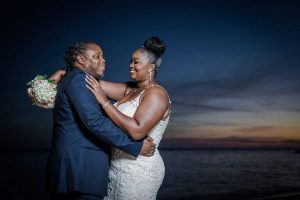 While dating apps can feel a little intimidating or uncomfortable for some people, for Kimberly and Torrey, an app was where their perfect love story began. Both parties swiped right on the other while using OkCupid back in October 2015. From there, Kimberly and Torrey decided to meet in person at the Marietta Diner in Marietta, Ga. Things didn’t immediately turn romantic, though. The two started off as friends. “From that time we remained friends through the years,” she tells ESSENCE. “We spent time just really getting to know each other.”

For Torrey, he knew in no time that Kimberly was someone special, but he was fine with taking things slow.

“I knew within a couple of weeks of meeting Kimberly that I wanted her to be around for a very long time and I was willing to show her,” he says. “Her confidence, witty personality, and smile is what caught my attention. She makes me laugh and I also love that she is a taller woman.”

The couple, both over six feet tall, also shared a love of food and would try new restaurants together. One day in December 2019, they decided to meet up at a local pizzeria. Little did Kimberly know, that day was the day she realized Torrey was the one for her.

“We were going to a nearby pizza restaurant that just so happened to be the the sister restaurant to the place we had our first date at. So to me it brought back the same feels and vibes as the day we met and he was still consistently just wanting to see me smile,” she says. “I realized he was the one and that no matter what changed around me he was my constant. His heart is so pure. And that night he made me smile just like that first day at Marietta diner. So on December 20, 2019 I asked him to be my boyfriend.”

A few months later, on February 8, 2020, the couple traveled with her parents to Gatlinburg, Tenn., known for the Smoky Mountains. The night before they arrived, unbeknownst to Kimberly, Torrey had asked her father for her hand in marriage. With the snow-capped mountains surrounding them and her parents present, Torrey popped the question. “It was beautiful,” she recalls. “After the proposal, we took photos in the snow, barbecued and whooped my parents in spades.”

From meeting online to finding love by becoming each other’s best friends, Kimberly and Torrey decided they would start their new chapter as husband and wife by saying “I do” in Jamaica’s third most populous city, Montego Bay, at the Iberostar Grand hotel. See how this couple celebrated their love with family and friends on November 20, 2021, and learn a bit about their planning process in this week’s Bridal Bliss.

Makeup and Hair: In Your Face Beauty