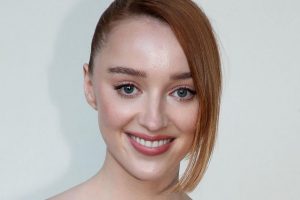 Celebrity makeover news klaxon: Phoebe Dynevor no longer looks like her alter-ego Daphne Bridgerton, as she’s ditched her famous coppery-toned hair in a rather dramatic move.

Sharing a couple of selfies to her 3.8 million Instagram followers in a gallery post, the 27 year old has revealed that she’s dyed her once reddish hair a dark brunette shade, also adding a curtain fringe to her look – which is worlds away from the Duchess of Hastings’ mini fringe from the Regency era Netflix hit.

It’s not clear if the hair transformation is in honour of a new role of Phoebe’s, or if she simply fancied a change to her usual beauty look. But either way, we’re sure you’ll agree that it suits her down to a tee. Don’t know about you, but the whole thing is kind of giving us Billie Eilish vibes – and her fans were quick to compliment her on the change, too.

“You and this hair. Divine,” one wrote, while another gushed, “DARK HAIRED PHOEBE ERA?”.

A third fan then chimed in with, “You look stunning with that hair,” as a fourth follower agreed, “I love your new hairstyle”.

It just goes to show that Phoebe can pull off just about any hair colour, from shades of blonde to copper and brunette.

Talking of TV stars who have changed up their hair recently, Jodie Comer also surprised fans with a shaggy “octopus haircut” look

Taking to Instagram, the 29 year old posted a photo to her 2.3 million followers in partnership with skincare brand Noble Panacea, for whom she is an ambassador – and also unveiled the brand new shaggy haircut at the same time, which has a real “octopus” feel to us.

“Kitchen cuts with @sammcknight1 round 2!” she ended the caption of her grid post along with the scissors emoji, tagging in the legendary hairdresser – and we have to say this layered style really suits her.

Who’ll be the next to get a little hair makeover, we wonder?