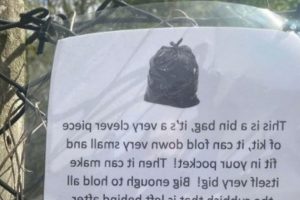 Thousands of Brits have been chuckling at a number of snarky notes which have been posted around parks to berate people who litter.

The laminated posters take the mick out of “imbeciles” who drop picnic waste and rubbish in local parks.

Due to the coronavirus pandemic, parks and beauty spots have become the place to be for dates, gatherings and meet ups.

Especially, if you don’t have a garden.

But, because of the increase in use, parks have been left in a state by messy diners and drinkers – and, it seems this note writer has had quite enough!

Sharing a snap of the poster, a Reddit user said: “Which one of you here wrote and hung this in 11 places in my local park?”

The letter features an image of a rubbish bag, and said: “This is a bin bag, it’s a very clever piece of kit, it can fold down very small and fit in your pocket!

“Then it can make itself very big! Big enough to hold all the rubbish that is left behind after your picnic in the park.

“Why not join forces with this clever bin bag and keep our beautiful park clean and tidy.

“Have respect for your surroundings, other people, children, dogs and wildlife.”

And, commenters were living for the message and its giggle-worthy delivery.

A second wrote: “Going to be stealing this, go for walks all the time in the local park and fields.

“Throughout lockdowns, been saying; it's a shame not seeing more people out and about.

“Now, people are leaving, don't know if its down to easing of lockdown or weather, and now I can't walk five passes without stepping on the rubbish.”

A third noted: “An absolute saint. Always blows my mind that people can carry something out and not take it back!”

“I just love how passively aggressive the British can be,” responder said.

“This gave me a chuckle, very funny,” another added.

Sadly, some posters didn’t think the sign would do much.

One such person wrote: “Amusing, but its a waste of time.

“The sort of people who leave sh** everywhere aren't the the sorts that stand and read notices.

“They probably can't read, “ added another.

A third commented: “Being aggressively condescending is always a great way to get people to do what you're asking….”