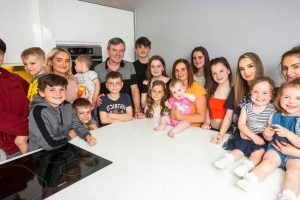 Britain's biggest family The Radfords is set to get bigger.

Chloe Radford has revealed that she's pregnant in an announcement on Instagram.

She shared a photo of her baby bump on the site with partner Jake Wallace kissing it.

Chloe, 26, wrote to her fans: "Mum and dad. Feeling blessed, grateful and full of so much love. We can’t wait to meet our little one this year."

People were quick to congratulate the pair, with the post racking up more than 10,000 likes in an hour.

The official Radford Family account commented on the post: "So so excited 2022 is going to be an AMAZING year."

While sister Millie added: "We are so excited too meet our niece or nephew."

Chloe's parents, Sue and Noel Radford, have 22 kids in total – making them the UK's biggest family.

The Radfords famously don't take any government help and live off of the income from Noel's family bakery business.

The business, called The Radford Pie Company, was opened by Noel back in 1999 after he trained as a baker.

The family are also stars of Channel 5 show '22 Kids and Counting' and make money from their popular social media accounts online.

They live in their recently renovated home, near Morecambe, Lancashire.

And busy couple Sue and Noel have previously admitted to spending a whopping £400 a week on groceries for their brood – including four loaves of bread a day, as well as 16 pints of milk, three tubes of toothpaste and 24 toilet rolls per week.

The baby announcement will come as welcome news after dad Noel was reported to be involved in a major health scare earlier this month.

In one episode of the second series of their Channel 5 show Noel found out he is at "high risk" for a heart attack or stroke.

The 51-year-old went to see a doctor after he found himself struggling while he was out running.

Confiding in the doc, he says: "I run a few hundred yards and I’m knackered and out of breath. It just doesn’t seem right.

“I don’t want to keel over and drop down dead on the pavement.”

After running some tests, the doctor tells him: “Your BMI was normal, we checked our liver, that was normal too.

“Your blood pressure was mildly raised, we need to lower that.”

Noel was then told he must change his diet and daily habits to improve his health as his high cholesterol count puts him at risk of a deadly stroke or heart attack.

Responding to the heath scare, the double-figures dad says: “It’s not what you want to hear is it, I was surprised that I was on the high risk."