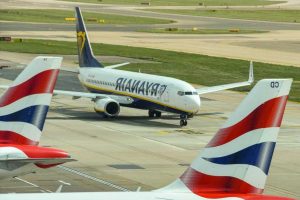 BRITISH Airways and Ryanair have been told they don't have to refund customers for lockdown flights.

The Competition and Markets Authority (CMA) has today decided no action will be taken in returning money to customers.

Back in June the CMA looked into whether the airlines should have offered money back to holidaymakers who couldn't legally take flights because of Covid.

When lockdown began in the UK planes were grounded and many passengers' flights were cancelled.

But neither British Airways or Ryanair offered refunds to those whose flights did go ahead, despite the fact these customers couldn't fly under the law.

Instead, British Airways offered customers free vouchers or free rebooking, and Ryanair offered the option to rebook for free too.

Ryanair told passengers in April last year that they would only get a refund after the Covid crisis was over.

Now the CMA has said it won't take action to force airlines to issue refunds.

The regulator said the law was not clear enough for it to take legal action against the airlines to get customers' money refunded.

It concluded that the "unusual circumstances" didn't justify continuing with the case it started in June.

Andrea Coscelli, chief executive of the CMA, said: "After considering the relevant law and gathering evidence in our investigation, we have concluded that the length of time that would be required to take this case through the courts, and the uncertain outcome, can no longer justify the further expense of public money.

"Given the importance of this to many passengers who have unfairly lost out, we hope that the law in this area will be clarified."

That means if you were a customer affected by the cancelled flights, you officially won't be getting your money back.

However, Ryanair had said it had looked into the specifics of some cases that warranted a refund.

A British Airways spokesperson said: "During this unprecedented crisis we have acted lawfully at all times, issuing nearly 4 million refunds and offering highly flexible booking policies enabling millions of our customers to change their travel dates or destinations."

A Ryanair spokesperson said: "Ryanair welcomes the CMA's decision to close its investigation.

"Passengers had the option to change their bookings without paying the flight change fee and many availed of this option."

Which? has also responded to the CMA decision. The consumer group is urging the government to set out how it plans to review travel regulations and strengthen consumer protections.

It said in an online statement: "These protections must be sufficiently tough, and give the ability to fine airlines directly for past behaviour to ensure they won’t step out of line again.”

It's not the same treatment that package holiday claimants received, however. A different set of laws allow these customers to be compensated.

Lockdown legislation made it unlawful for some businesses to operate, so package companies couldn't continue their services.

But airlines technically could, and as they were permitted to continue flights, refunds became a grey area.