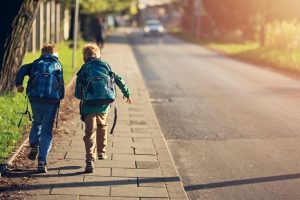 Though our kiddos may play more Fortnite than fort building they’re still eager to play out with pals.

And, what’s one game that little one’s find outrageously funny whether they grew up in the 80s or the 2010s?

Knocking on their neighbours doors and sprinting away before they get caught.

As annoying as it is for us adults, the sound of shrieking and giggling children who think they’ve played the best prank ever is always sweet.

What do you call this game? Tell us in the comments…

But, Brits have been arguing online about what exactly the cheeky game is called.

A Twitter user asked the question: "When you were younger what did you call it when you knock on someone's door and run away?"

And, thousands of people replied – around 2.5k to be exact.

One poster offered a popular reply: “Knock a door run."

But, not everyone agreed and many came back with alternative names – some of which are a bit nonsensical.

"Knock down ginger,” said another.

What? Why are you pushing redheads over? And why do hundreds of people agree?

Another poster suggested the game was called “Knock a dolly.”

While someone else added: “Chappy.”

Apparently, chappy is another word for “knock”.

We can’t argue with the logic of that one, so we’ll allow it.

While another added: "Thunder and Lightning.

Makes sense, in a roundabout way…

And a poster from County Durham said: “knocky hide oh.”

And, another northerner from Sunderland said: “Knocky nine doors.”

Not everyone took the question so seriously.

“Today it's called – Royal Mail Delivery,” laughed another while making fun of the delivery service.