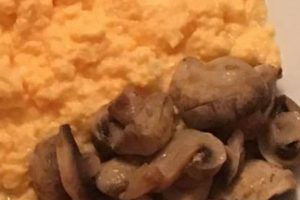 Most Brits love a cooked breakfast in the morning.

However, one bloke's brekkie has been branded as 'grim' and 'offensive' by food lovers.

The guy, simply known as Barry R, took to popular Facebook group Rate My Plate to share what he was having for breakfast.

And people didn't seem very impressed by it at all.

The photo showed that Barry had gone for the popular breakfast items of scrambled eggs and cooked mushrooms.

However, many were baffled that he had decided to pair them with prawns.

One person exclaimed: "It’s like the prawns crawled out of their shells… grim. Soooo grim."

While another asked: "What psychopath has prawns for breakfast?"

A third quipped: "That's an exotic prison breakfast, to include a seafood option."

While a fourth wrote: "Deliberately trying to offend now!"

Many were also left confused about why Barry had cream crackers on the side, while others questioned why he had such a small amount of butter on them.

And the criticism wasn't done there, as others slammed the blue tray he was eating off of.

Another foodie suggested they all pooled in to buy Barry a Wetherspoons breakfast instead.

They wrote: "Please can you find it in your hearts to donate £3 then this poor soul can get down spoons and get a proper brekkie."

We don't think prawns will become a new brekkie staple in the UK somehow after this post!

The post comes after another Brit was mocked this week over their roast dinner, which was compared to the sole of a shoe.