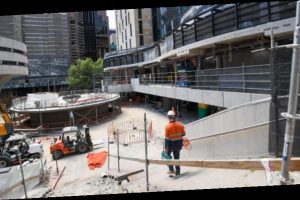 The government's building watchdog is investigating a construction union campaign of safety checks that have shut down several Sydney building sites worth more than a combined $1 billion for days amid enterprise agreement negotiations.

Under the Construction Forestry Maritime Mining Energy Union's proposed enterprise agreements, workers will get pay rises of 5 per cent a year, about three times this year's minimum wage rise, and receive every second Monday off. 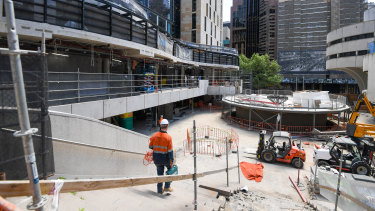 The MLC Centre redevelopment is among the projects that the CFMMEU has inspected over safety issues.Credit:Peter Rae

A redevelopment of the Hornsby Ku-ring-gai Hospital and the MLC Centre in central Sydney are among the five projects the union has visited for safety checks in recent weeks, which building industry sources have suggested were not legitimate.

In a furious letter to the Master Builders Association seen by The Sydney Morning Herald, the union rejected suggestions it sabotaged toilets at the MLC Centre to shut down the site and encourage its primary builder, Probuild, to agree to the union's agreement.

"The CFMEU would not, and certainly does not have to resort to sabotage," the union's NSW construction state secretary Darren Greenfield said.

"Builders, including MBA members, do a very good job themselves with substandard safety standards, of putting workers at risk of injury and death on site.

"The suggestion by you is offensive to the CFMEU, its officials and its members."

Master Builders Association NSW chief executive Brian Seidler, who argues the CFMMEU's agreement is unaffordable, has not yet responded to the letter, but said there was a "heightened awareness in the industry of the use of amenities to stop jobs".

"If this is true [that the toilets were deliberately blocked], that it is wanton sabotage, then there will have to be a very detailed investigation to identify who was behind this issue," Mr Seidler said.

The MLC Centre site was shut for four days, according to an industry source who spoke on condition of anonymity. The Australian Building and Construction Commission confirmed in Senate estimates on Monday night they were investigating the union's visits at five sites run by builders Watpac and Probuild.

In recent years, there have been at least seven cases around the country where the CFMMEU was found by courts to have used safety concerns as a pretext for pushing its industrial agenda. Federal Court Judge Robert Cameron said last year that purported safety concerns raised by the union about a crane company were "a form of extortion".

Unionists are normally allowed to go onto work sites only with advance notice and are restrained in what they can access but there are exceptions to that rule where there are safety risks. 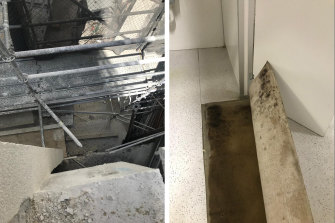 The CFMMEU said the Sydney building sites it inspected had safety hazards including no protection from falls and black mould under tiles.

The union has denied any suggestion the safety claims are part of its enterprise agreement negotiations. At the Probuild site on Bathurst Street in the Sydney CBD, the union said it found serious safety problems as part of its long-running safety campaign including black mould under tiles in amenities rooms, insufficient railings, and fire protection systems that don't reach the top floors of the building site.

Both Watpac and Probuild, which have historically had a reputation as being union-friendly but have not agreed to this year's EBA, declined to comment. The union has been trying to get a major builder to sign up to its agreement for the past year without success but hundreds of subcontractors have agreed to it.

Under the CFMMEU's current agreement, construction labourers on commercial sites are paid about $3200 before tax for a 56 hour work week, according to the union's pay sheets.

Attorney-General and Industrial Relations Minister Christian Porter said the government had no tolerance for rule-breaking behaviour of the CFMMEU on construction sites.

"It's not only illegal, it's costing jobs," he said.

The most important news, analysis and insights delivered to your inbox at the start and end of each day. Sign up to The Sydney Morning Herald’s newsletter here and The Age’s newsletter here.

END_OF_DOCUMENT_TOKEN_TO_BE_REPLACED

END_OF_DOCUMENT_TOKEN_TO_BE_REPLACED
We and our partners use cookies on this site to improve our service, perform analytics, personalize advertising, measure advertising performance, and remember website preferences.Ok