Home » Lifestyle » Bubbles, hubs and isolation: a chronicle of an AFL season like no other

Bubbles, hubs and isolation: a chronicle of an AFL season like no other 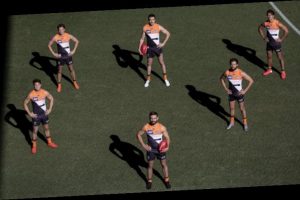 Whatever the future holds, there will never be an AFL season like 2020 . With the outbreak of COVID came a succession of unhappy firsts. The home-and-away season was halted after a single round, with no idea of when it might resume. The reality of lockdowns and social distancing quickly emerged, as did radically different regimes for elite sportspeople.

Football clubs and gyms were off-limits, the expert staff and equipment that had routinely been available were suddenly inaccessible. Then came the rules stipulating smaller groups for training and the advent of bubbles, hubs, frequent virus testing and long periods away from home for players unaccustomed to such conditions. Throughout the upheavals, the sporting code, and indeed the country and the world, were saturated with uncertainty. 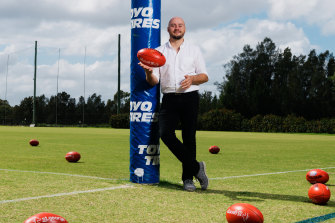 “There are unique situations that challenge individuals and obstacles for them to overcome,” says director Gil Marsden of his AFL documentary Making Their MarkCredit:James Brickwood

Eventually – and remarkably, given how many sports locally and internationally were forced to shut down – came a truncated season, shorter quarters, empty stadiums and then the “footy frenzy” that saw teams playing with previously unthinkably brief recovery times between games.

Spanning the season and made up of hour-long episodes with a 90-minute finale, Making Their Mark is a seven-part chronology of that extraordinary time. It offers a detailed and historically valuable record of the period through the lens of what director and co-executive producer Gil Marsden describes as “character archetypes”.

“It’s more of a heroes narrative than your standard headline-based footy journalism,” says Marsden, who previously co-produced and directed the Emmy-nominated documentary series The Gymkhana Files for Amazon Prime. “We’re looking at it through characters, trying to present more of a journey than just a pure document of the season. There are unique situations that challenge individuals and obstacles for them to overcome.”

Working on the project since early in 2019 and teaming with the JAM TV production house, Marsden began with a grid featuring about 1700 possibilities, whittling them down to achieve the range of profiles and representation required. The series focuses on a select group of people: Carlton forward Eddie Betts, the 33-year-old veteran with a single-year contract returning to the club where he started his career; West Coast Eagles ruckman Nic Naitanui, described by his coach as “a rock star”, back on the field after prolonged injury; Greater Western Sydney captain Stephen Coniglio and Adelaide Crows captain Rory Sloane; Gold Cost Suns senior coach Stuart Dew, guiding a team of rookies that ended its 2019 season at the bottom of the ladder; and Richmond’s president, Peggy O’Neal, senior coach, Damien Hardwick, and CEO Brendon Gale, whose club won the 2019 premiership. 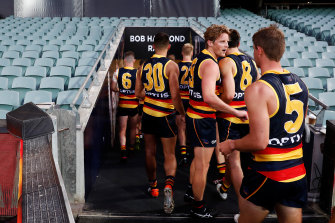 Rory Sloane of the Crows walks from the field during the round 1 AFL match between the Adelaide Crows and the Sydney Swans at Adelaide Oval on March 21, 2020.Credit:Daniel Kalisz/Getty

As luck would have it, the producers chose to spotlight the team that finished at the top of the 2020 ladder and the one that received the dreaded wooden spoon, although Marsden says, “I guess kismet’s a part of it. The truth is that, like any sport, like anything in life really, you can’t really control what’s going to happen, especially in a year like we’ve had.”

As with comparable sports-documentary series, such as The Last Dance (Netflix) and The Test (Amazon Prime), Making Their Mark offers viewers a box-seat behind the scenes: access to the gyms and locker rooms; to team meetings and pre and post-match analysis sessions; to coaches’ assessments and addresses. You can hear what they say on those phones in the coaches’ boxes during games. Cameras in the change rooms witness the jubilation that follows a victory and the despondent silence that accompanies a defeat.

There’s attention to the different temperaments and styles of several coaches and footage of a meeting where a captain is told that he’s been omitted from selection in the coming round due to his slump in form. 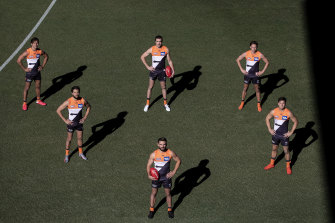 There’s also the kind of detail that delights fans: that “NicNat” prefers to sleep on the floor; that Betts has a pair of lucky undies featuring a watermelon print and enjoys Conway Twitty songs; that Naitanui and Coniglio draw comfort from their religious beliefs.

And there’s attention to darker issues: Betts dealing with racial vilification; Sloane suffering an injury as his team battles the longest losing streak in the club’s history.

While the tone of the series is admiring and affectionate, Marsden says, “we wanted the documentary to be raw because we believed that the more transparent you are, the more heroic most of these individuals become because you’re seeing that there are challenges, that it’s not all rosy.”

He also observes that “there’s an unfortunate irony because the things that are bad for other people are also good for you as documentary makers. It’s good content”. 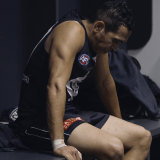 Carlton’s Eddie Betts in a scene from Making Their Mark.Credit:Amazon Prime

Unlike top-class cricketers, who are accustomed to long periods away from home, Marsden remarks that footballers’ lives aren’t generally structured that way: they might typically travel for a few days at a time, but they have a solid home base, as well as familiar football clubrooms and training regimes. So hub life, which Naitanui describes as “a paradise jail” and which came with strict restrictions, represented a brave new world for everyone. That included the series’ production team, which was considerably reduced from its original size and also subject to hub rules.

Marsden, who was born in Chicago and came to Australia as a teenager, also notes that, while AFL stars might be well remunerated when compared to less athletically gifted members of the public, elite sportsmen in Australia earn a fraction of what their counterparts in the US or Britain can command, and that makes viewers better able to relate to them. They too have problems with childcare arrangements rather than having nannies on call.

“I think it’s underestimated how much AFL players go through and how much they put their bodies on the line,” he says. “They’re leveraging their physical wellbeing and, for some, their mental health, for this sport that brings us so much joy. And to know that they’re struggling with the same things that we struggle with through the year is the unique value of this show.”

Marsden’s production reveals the challenges and bumps of the season through observation, and, given how tightly the utterances of current players and coaches are monitored by the AFL and various media departments, that’s a sensible approach. “There’s not a single sit-down interview through the course of filming and that’s an active choice,” he says. “We found that the better way to get to a sense of honest truth was to follow and just watch them be themselves, to see the values that they practise and not the ones that they preach.” 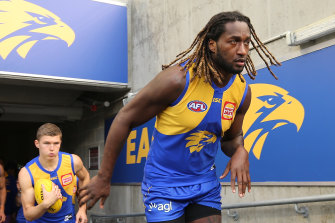 “I think that the more you care about someone as a filmmaker, the easier it is to make an audience care about them. But we don’t shy away from the difficult moments and the derision that you get along the way: they’re full-contact sports, AFL and documentaries.”

WHAT Making Their Mark
WHEN Amazon Prime, from Friday

Find out the next TV shows, streaming series and movies to add to your must-sees. Sign up to get it every Thursday