Home » Lifestyle » Businesses to be given $1.2 billion in wage subsidies to create 70,000 apprenticeships

Businesses to be given $1.2 billion in wage subsidies to create 70,000 apprenticeships 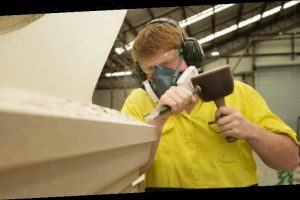 Employers will be given at least $1.2 billion to hire 70,000 apprentices in the next year in an uncapped job-creation plan the Morrison government hopes will avoid a youth unemployment crisis from the coronavirus pandemic.

As many as 100,000 apprentices have been employed through the existing wage subsidy scheme, which was announced just five months ago in October. More than 30,000 new apprentices have been hired in NSW, and almost 24,000 in Victoria, under the initial phase of the program that subsidised apprenticeships in a bid to stem an anticipated tide of job-shedding. 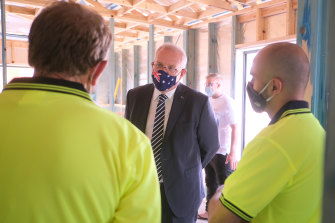 Prime Minister Scott Morrison will on Tuesday announce an expansion of the government’s apprenticeship wage subsidy program in a bid to create 70,000 jobs.Credit: Luis Ascui

Business groups have called for longer-term incentives to hire young workers, who economists feared would bear the brunt of the COVID-19 recession. Australian Bureau of Statistics data shows that by mid-February, the number of people in their 20s holding a job was down 2.5 per cent since the start of the pandemic. The next worst-hit age group were teenagers, down by 0.9 per cent.

Prime Minister Scott Morrison will on Tuesday announce an expansion of the scheme, extending its operation for another 12 months and uncapping the number of apprenticeship places. The government expects the wage subsidy will support a further 70,000 apprentices to be hired in the next year.

“In less than five months, we have reached the target of 100,000 new starters under this program,” Mr Morrison will say at a speech to a business summit in Sydney.

“Taken together with the support for existing apprentices, that means over 222,000 apprentices and trainees are being supported by our wage subsidy programs, keeping our pipeline of skilled workers in place during a once-in-a-century global pandemic and recession.

“This will ensure an apprenticeship place is there for any Australian and every business who wants one as our economy recovers.”

The Australian Industry Group, which represents many apprentice-employing businesses, has called on the Morrison government to boost financial incentives.

In its submission for the May budget, the group raised concerns that the original apprentice incentive scheme was of a short-term nature that failed to address ongoing issues around apprenticeships.

“Ignoring the temporary programs responding to the pandemic, the financial incentives for employers have changed little for the past 20 years,” it said.

The spending measure comes as the government bids to revive the economy using the federal budget, which faces a deficit of $197.7 billion and debt rising to $1.1 trillion by 2031.

The apprenticeship program incentivises businesses to take on new trainees by paying 50 per cent of their wages for the first year, up to a cap of $7000 per quarter.

The initial phase of the wage subsidy program, announced with $1.2 billion in funding in the federal budget in October, was capped at 100,000 places.

When the program was announced in October, shadow Treasurer Jim Chalmers said Labor welcomed support for young workers as necessary “to start to fix the mess that the Liberal government has made of training of the last seven years”.

“We can’t afford a lost generation sacrificed to this recession. Now, obviously it doesn’t make up for the 140,000 fewer apprentices we’ve seen over the life of this government. There’s no long term vision for training.”

The government said more than half the new apprentices hired so far were under the age of 25, and more than 80 per cent under 45 years old, with 40 per cent of the new hires made by small businesses.

Most of the new jobs were created in the construction industry, with more than 8000 apprentices hired as bricklayers and carpenters, almost 7,000 as electricians and 6000 mechanics across Australia.

“By expanding this wage subsidy for another 12 months, we’ll be helping businesses to create even more jobs, further supporting our national economic recovery plan for Australia,” she said.

New apprentices and trainees will have until September 30 to sign up for the scheme.