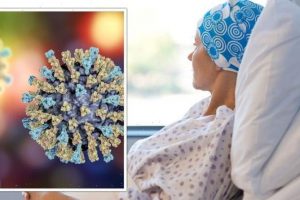 GMB: Expert warns of cancer 'whirlwind' in the UK

The number of recorded cases of mumps in England soared to the highest level in a decade last year, prompting Public Health England to urge people to get fully immunised against the virus. The World Health Organisation also warned of a dangerous surge in measles outbreaks in 2019, with nearly 10 million cases and 142,000 deaths resulting from the virus the preceding year. While vaccines against both vaccines provide efficient protection, a new study has revealed cancer patients may be at greater risk of the deadly viruses.

The study, led by the Fred hitching Cancer Research Centre, assessed levels of antibody protection against measles and mumps.

Biostatistician Elisabeth Krantz, said: “We found one in four cancer patients tested lacked protective antibodies for measles, and it was more than one in three for mumps.”

Doctor Steven Pergam, physician-scientist at the Fred Hutchinson Cancer Research Center, felt compelled to conduct the study after noting that a measles outbreak would pose a serious threat to cancer patients.

While childhood vaccinations against measles have curbed infection rates of the disease drastically, rare outbreaks in cancer hospitals in the 1980s caused fatality rates as high as 70 percent.

READ MORE: Brain tumour symptoms: What are the signs of a brain tumour?

Doctor Pergam noted: “Patients need to be vigilant and remember that other vaccine preventable diseases remain a risk in our communities.

“Caregivers and family members should check their status and make sure they are up to date on all their vaccines.“

Before vaccines against COVID-19 became widespread, infection rates for the virus were set at 2.5, while in measles the basic reproduction number is often set between 12 and 18.

Pergam added: “It’s the prototypical airborne virus. There are cases where people with measles have been in an exam room and left it.

“Over an hour later, another patient comes in and acquires measles from that room. It’s just incredibly infectious.”

For their study, Pergam and Krantz, followed patients who visited the Seattle Cancer Care Alliance clinic for daytime checkups over a period of five days.

The researchers drew blood samples from a total of 959 patients to test them for antibodies to measles and mumps.

The findings showed low levels of protection against the highly contagious disease, with antibody levels varying significantly by age, cancer type and treatment.

Researchers noted that antibodies against measles were as high as 95 percent among patients aged 80 and older.

Protection against the virus was lowest among those aged between 30 and 39, with only half showing such levels of antibodies.

The study authors believe the variation across age groups is due mainly to the likelihood of older patients having developed measles as children.

They also noted that exposure to the virus provided longer lasting protection against the virus than the vaccine.

Analysis for mumps antibodies revealed even lower levels, with 38 percent of patients lacking protective antibodies. Study authors were less surprised by the results, due to the vaccine against virus being notably less efficient. The researchers noted that measles antibody protection was better among patients with solid tumours (83 percent) compared to those with blood cancer (63 percent).

Pergram explained:“Blood cancers are diseases that directly effect the immune system. In those with these disease, responses to vaccines are known to be substantially decreased, by both the cancer and the treatment itself.”

According to the Centers for Disease Control and Prevention, symptoms for both viruses include:

Mumps causes fever, headache, muscle aches, tiredness, loss of appetite, and swollen salivary glands. Complication from the virus include swollen of the testicles or ovaries, deafness, inflammation of the brain and/or tissue covering the brain and spinal cord, and, rarely, death.