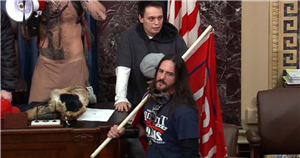 A man from Florida who waved a “Trump 2020” flag on the floor of the Senate chamber on January 6 was sentenced to eight months in prison Monday — the first time a Capitol riot defendant was sentenced for a felony charge.

Paul Hodgkins, a 38-year-old crane operator, pleaded guilty last month to one count of obstruction of an official proceeding, and acknowledged that he took a selfie and joined a group of rioters who assembled at the front of the Senate chamber, with the intention to obstruct the certification of the 2020 Presidential election.

When announcing the sentence — which was less than the 15 to 21 month sentence recommended when Hodgkins pleaded guilty — Judge Randolph Moss called the Capitol attack “an assault on Democracy,” but said Hodgkins’ lack of criminal history and willingness to accept responsibility warranted a lower sentence.

His sentence could signal potential punishments for other Capitol riot defendants. Prosecutors said earlier this month that nearly 235 defendants had been charged with the same crime to which Hodgkins pleaded guilty. “It appears the entire nation will be tuning in,” Hodgkins’ lawyer, Patrick LeDuc, said Saturday during a phone interview with CBS News. 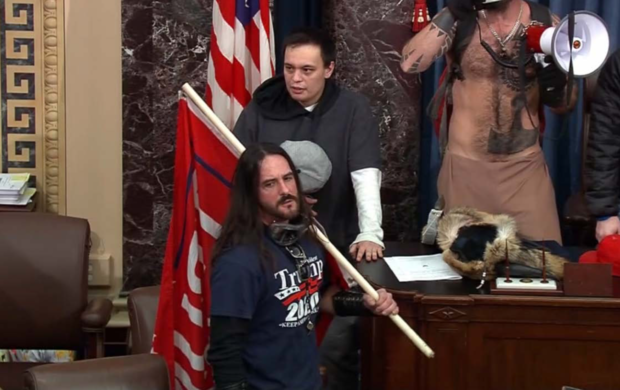 Sedky noted that Hodgkins entered the Senate chamber during a “violent riot that engulfed the entire Capitol,” which resulted in injuries for more than 100 law enforcement officers and threatened the peaceful transfer of power after the presidential election.

“The rule of law was not only disrespected, it was under attack that day,” Sedky wrote. “A lesser sentence would suggest to the public, in general, and other rioters, specifically, that attempts to obstruct official proceedings are not taken seriously.”

Sedky acknowledged that Hodgkins had taken “significant steps” toward rehabilitation, and that he didn’t personally engage in any violence or destruction of property that day, but she wrote that the government could not ignore the seriousness of his crime.

“The need to deter others is especially strong in cases involving domestic terrorism, which the breach of the Capitol certainly was,” she wrote.

Unlike in other Capitol riot criminal cases, prosecutors did not accuse Hodgkins of committing a “crime of terrorism,” but they did compare his conduct to that of a domestic terrorist, writing that it involved “intimidation or coercion” aimed at influencing the conduct of government.

In a court filing last week, LeDuc compared the prosecution of the events of January 6 to the period of reconstruction after the U.S. Civil War.

“Today, the country is as divided as it was in the 1850s. But today, this Court has a chance to make a difference,” LeDuc wrote. “We have the chance to be as Lincoln had hoped, to exercise grace and charity, and to restore healing for those who seek forgiveness.”

So far, nearly 20 Capitol rioters have entered guilty pleas, and two have been sentenced for misdemeanor crimes: one, Anna Morgan-Lloyd, was sentenced to three years probation and no jail time, and another, Michael Curzio, was sentenced to six months imprisonment, although the courts credited him for the nearly six months he had already spent incarcerated as he waited for the courts to hear his case.

Those who have pleaded guilty face a wide range of recommended sentences, based on their charges — a reminder of the differing allegations against Capitol riot defendants, some of whom have been charged only with misdemeanors, while others could see years in prison for alleged assaults on officers, conspiracy and weapons crimes.

One defendant, Josiah Colt, pleaded guilty to the same obstruction charge as Hodgkins, but faces a recommended sentencing range of 51 months to 63 months, more than three times higher than Hodgkins’ original recommended sentence.

Unlike Hodgkins, Colt was accused of bringing a cache of weapons and ammunition to D.C., and has agreed to cooperate with prosecutors as they bring cases against two co-conspirators.

During a statement read in court Monday, Hodgkins said that he felt remorse and shame for entering the Capitol that day. “If I had any idea that the protests at the Capitol building would escalate to the levels that they did, or that the charges would be what I have faced since then,” he said, “I would have never ventured any further than the sidewalk of Pennsylvania Ave.”

Hodgkins said that although he did not engage in violence or theft, his involvement did still contribute to the “greater problem that took place.” He said, “I have also thought at times that the company of us who remained calmer in our protest may have made others feel emboldened to carry out the destruction that occurred.”

Hodgkins said that since his arrest, he’d spent more than 100 hours volunteering at an animal shelter and food bank, had joined a church, and had been vaccinated against COVID-19.

“In addition,” he said, “I wish to state that I completely acknowledge and accept that Joseph R. Biden Jr. is respectfully and rightfully the President of the United States.”

When announcing his decision, Moss cited the fact that Hodgkins stood beside the dais of the U.S. Senate and raised a “Trump 2020” flag. The symbolism of that act, Moss said, was “unmistakable.” Hodgkins had staked a claim on the floor of the United States Senate, “not with the American flag,” Moss said, but with a flag that declared his loyalty “to a single individual, over a nation.”

Moss said, “That act captured the threat to Democracy that we all witnessed that day.”