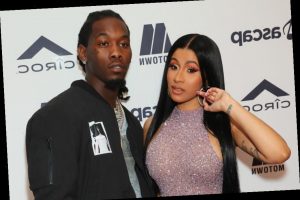 It’s official: Cardi B and Offset are over. The “Be Careful” crooner filed to divorce Offset on Tuesday, Sept. 15 after three years of marriage.

The news sent shockwaves across social media, as there was no indication in recent months that anything was wrong in their relationship. However, Cardi B actually posted something telling to her Instagram Story shortly before filing to divorce the “Need It” rapper.

Ahead of the filing, Cardi B shared a post to her Instagram Story that now has fans looking at it in new light. It’s a meme that reads, “Her heart finally told her to stop wasting her time.”

“It’s time,” Cardi B captioned the image, adding on a winking emoji.

She did not elaborate at the time, but the message has led to speculation that she was talking about filing for divorce from her “Clout” collaborator, whom she married in a secret ceremony in September 2017 after about a year of dating.

Cardi posted this in her insta story yesterday too 👀

Hollywood Unlocked was the first to report Cardi B’s move to split from Offset. The outlet noted that she filed documents in Fulton County in Atlanta, where she shares a $5 million mansion with Offset and their 2-year-old daughter, Kulture Kiari Cephus.

So far, neither of them has directly commented on the divorce filing. However, E! News obtained court documents that say their relationship is “irretrievably broken” and that there’s no chance of working things out. The outlet adds that Cardi B reportedly wants child support for Kulture and that she hopes they can reach a settlement that works for them.

A source made similar claims to Us Weekly, saying that the pair allegedly hopes to keep things cordial for the sake of their daughter. “Offset and Cardi both continue to put Kulture first through this troubling time,” said the insider, who is supposedly close to them.

As many fans know, Cardi B and Offset have been here before. She also announced in December 2018 that she was splitting from the Migos member after he was accused of cheating with other women.

They eventually reconciled after Offset publicly begged for Cardi B’s forgiveness and another chance to make it work. However, their relationship continued to face cheating rumors. Most recently, Offset was accused of infidelity in March when he was seen “hiding” his phone from Cardi B in a viral video. However, he denied the claims in an Instagram post.

The end results of all that shit I put on my hair earlier😩😂😂.Treat your hair ladies …and don’t let a nikka tell you shit bout wearing wigs😤It helps with hair growth ALOT !

Their latest breakup is a sad end for one of music’s most popular hip hop couples. But here’s wishing them the best of luck moving forward.

END_OF_DOCUMENT_TOKEN_TO_BE_REPLACED

END_OF_DOCUMENT_TOKEN_TO_BE_REPLACED
We and our partners use cookies on this site to improve our service, perform analytics, personalize advertising, measure advertising performance, and remember website preferences.Ok