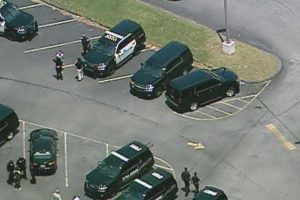 A man opened fire at a Decatur, Georgia grocery store on Monday, killing a cashier and wounding a deputy who responded to the scene. According to CBS Atlanta affiliate WGCL, the shooting at the Big Bear supermarket occurred during a dispute over face masks.

An eyewitness told WGCL the situation escalated after the man was asked by a woman to put on a mask. The eyewitness said the suspect shot the woman in the head after becoming frustrated.

The deputy involved was in stable condition. So was the suspect, who was shot by the deputy, authorities said. WGCL reports that a second cashier was grazed by a bullet but she was treated at the scene.

The suspect has been identified as 30-year-old Victor Lee Tucker, Jr. of Palmetto, Georgia. It’s unclear what charges he faces.

No further information was given about either of the cashiers.

Authorities said the deputy was a 30-year law enforcement veteran. According to WGCL, he had recently retired as major with the DeKalb County Police Department before moving over to work with the Sheriff’s Office.