If someone in Bachelor Nation told me a few weeks ago that the Bachelor cast’s resident quiet girls would dominate group date time with arguing, I’d assume they had one too many glasses of wine. But lo and behold, Episode 7’s group date touched upon last week’s recurring theme of women warning Colton Underwood about contestants who weren’t ready for marriage, and the discussion resulted in a tense moment between Cassie and Kirpa. Cassie and Kirpa’s fight has Bachelor Nation freaking out, and this wasn’t even the episode’s only dramatic confrontation.

It was a busy week for Colton in Feb. 18’s episode, as the former football player went on three one-on-one dates and a group date with the four remaining women, which sounds gloriously intimate compared to previous dates in the season. Introducing the contestants to different elements of his hometown of Denver, Colton brought Cassie, Kirpa, Hannah G., and Heather to Colorado’s beautiful mountains. At this point in the season, the group date is often an awkward afternoon of women staring at each other while another contestant is off in the corner with Colton. No surprise, but this day followed precedent almost painstakingly.

The outdoor date came after all three women eliminated in last week’s episode told Colton to look out for the girls who weren’t prepared for the lifelong commitment he wanted. Despite their dramatic deliveries, Colton neglected to ask the women who they meant. Not your wisest move, dude!

On her one-on-one date earlier in the episode, Tayshia cleared up fans’ questions about who the others suspected of being there for the wrong reasons. She confessed that Cassie and Caelynn weren’t ready for marriage and that they had talked about becoming the next Bachelorette. Caelynn was able to clear her name on her own date with Colton, although there was still tension between her and Tayshia afterwards.

On the group date, Kirpa was the one to address Cassie’s ties to the Bachelorette gossip. 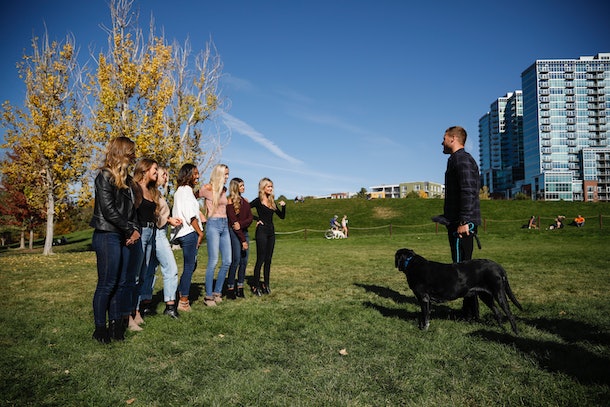 Unbeknownst to viewers, Katie, the last of last week’s eliminees, believed that Cassie and her intentions weren’t the best for Colton. Kirpa, 26, confessed to Cassie, 23, on Feb. 18’s group date that she had heard of the rumors from Katie and then admitted to producers that she would talk to Colton about it if he asked.

During her own time with Colton, Cassie listened to his concerns about the group gossip. She then opened up about the shock of seeing her name dragged through the mud and feeling helpless in not being able to correct what people were saying. Like Caelynn, she promised she was genuinely there for Colton, but Kirpa was determined to help Colton end up with someone who wouldn’t break his heart.

When he later spoke to Kirpa, Colton asked the dental hygienist for her opinion on Katie’s warning and Tayshia’s claims. Kirpa broke down everything she knew for him, revealing that Cassie and Caelynn were the only ones to panic when Colton brought up the eliminated contestants’ strange warnings. The details of their conversation got out to the rest of the group, prompting Cassie to freak over Kirpa talking about her.

Defending herself, Kirpa told an angry Cassie, "If Katie felt strongly enough to tell Colton that people still aren’t here for the right reasons or that they’re not ready, she wouldn’t have made that up."

Cassie insisted that the warning stemmed from lies, believing that Kirpa didn’t have any proof to validate her concern. Kirpa refused to let the speech pathology student call the warning "dumb" because "Colton’s heart is on the line." The argument culminated with both women refusing to back down from their beliefs, but Kirpa took Cassie’s emotion as a sign that she was hiding something.

During the date’s night portion, Colton gave Hannah G. the first date rose, putting Cassie and Kirpa at risk for elimination (Heather eliminated herself earlier). When Hannah returned home and filled Caelynn and Tayshia in on the drama, Caelynn crashed the group date to set the record straight. She slammed down the rumors, saying she was sick of girls tearing each other down. Without a word to Cassie and Kirpa, she left, and Colton handed the remaining rose to Cassie. These girls know how to talk themselves out of a sticky situation, huh?

Colton definitely still has a soft spot for Cassie, but we’ll have to wait and see if all of these rumors affect his future decisions. Season 23 of The Bachelor continues on Monday, Feb. 25, at 8 p.m. ET on ABC.