Home » Lifestyle » Catfish UK: Man discovers his boyfriend is a woman he scorned

Catfish UK: Man discovers his boyfriend is a woman he scorned 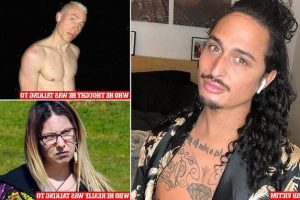 Hairdresser, 30, discovers his hunky online boyfriend of a year is actually a WOMAN who set up fake dating profile to take revenge on him after he called her ‘boring’ at a party

A hairdresser who had been dating his boyfriend for more than a year but never met him in person discovered his hunky personal trainer beau was actually a woman he had scorned in the latest episode of Catfish UK.

The hit MTV show returned to screens last night following a mid-season break, with 30-year-old Alex from Hastings enlisting the help of hosts Oobah Butler and Julie Adenuga to track down his boyfriend Matt, after growing suspicious of why his partner would never video chat or meet him in person.

Viewers were left ‘lost for words’ following a shocking scene that revealed ‘Matt’ was actually a woman called Jess – who had concocted a revenge plan after Alex met her at a party and branded her ‘boring’.

Despite Alex not remembering ever meeting Jess, she didn’t hold back in seeking vengeance, and admitted to using a voice-changing app to sound male while on the phone, revealing her ‘anger got the best of her’ because Alex was acting like billy big b*******’ and ‘s****** her off’.

Despite only texting and occasionally chatting, Alex was infatuated with the person he thought Matt after meeting on a dating app.

The pair had even agreed to get tattoos of each others initials on their wedding ring fingers, and spoke every day. 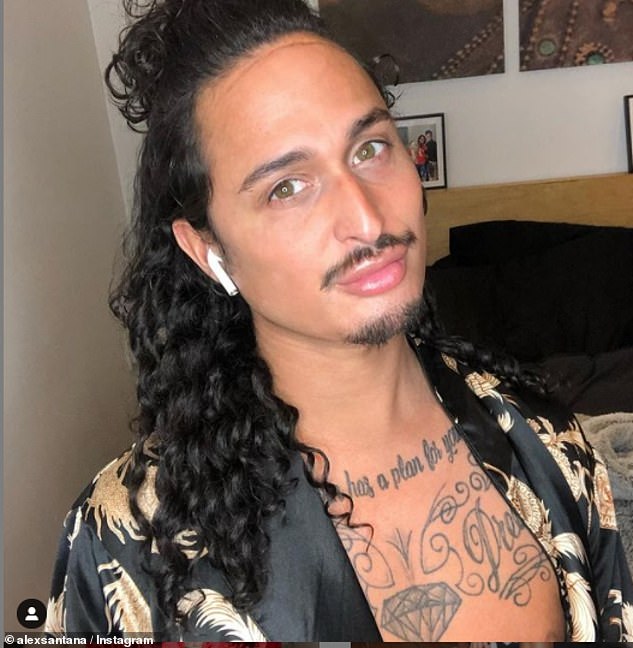 Alex, 30, a hairdresser from Hastings enlisted the help of hosts Oobah Butler and Julie Adenuga, to track down his boyfriend Matt, after growing suspicious of his partner who would never video chat.

‘We really clicked and it felt like we’ve known each other forever. We talk everyday and sometimes speak on the phone, but he always makes excuses not to video call,’ Alex explained to hosts Julie and Oobah.

‘There’s just something about that boy that makes me happy,’ he added, before revealing: ‘He only wants to speak at certain times of the day, I’ll hear from him for days and then not at all.

‘He never wants to FaceTime. I’ve tried to call a couple times but he’s not picked up. But he means a lot to me.

‘Out of every email we’ve ever received, this is the most hopeful,’ Julie said ahead of heading to meet Alex, while Oobah was more sceptical saying: ‘These are signs of a classic catfish’. 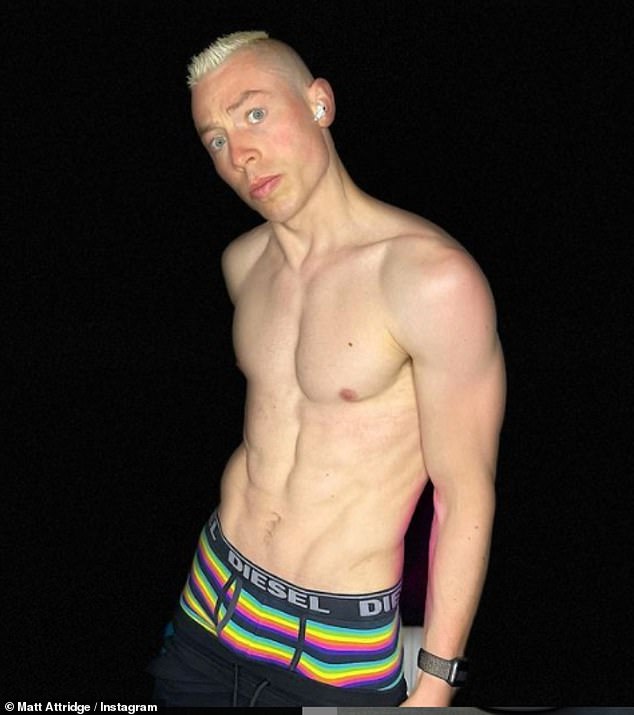 Alex believed her was talking to Matt (pictured) on the show, but he was actually engaged to someone else

After travelling to Hastings to meet Alex, Oobah and Julie found an Instagram account for Matt, but immediately thought it was suspicious.

Despite having thousands of followers, Matt’s photos had very few likes, he posted up to 20 pictures a day, with Oobah suspecting he was bot.

They explained it was ‘worrying’ that all his photos were selfies or products, and that there were no snaps of friends or family.

The pair noticed  a flirty comment on a topless photo of Matt from a man named Charles.

After calling Charles, they discovered he was Matt’s fiancé and partner of 13 years.

‘This makes so much sense, this is why he can’t take video calls, because his fiancé’s in the room,’ Oobah explained.

‘My mind is blown,’ Julie added. 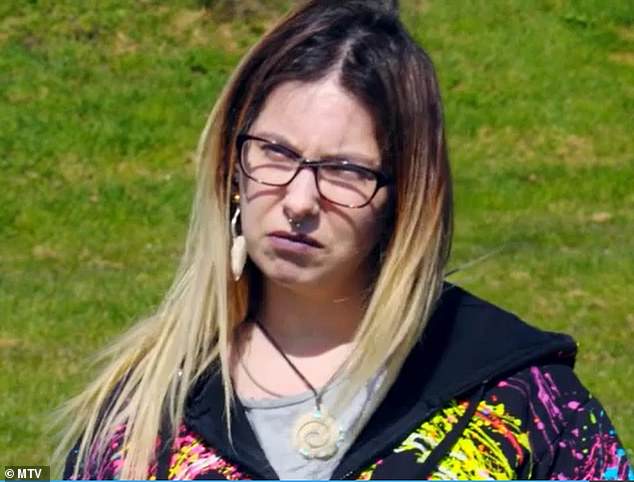 ‘Matt’ turned out to be Jess – who Alex met at party. She was upset at being called ‘boring’ 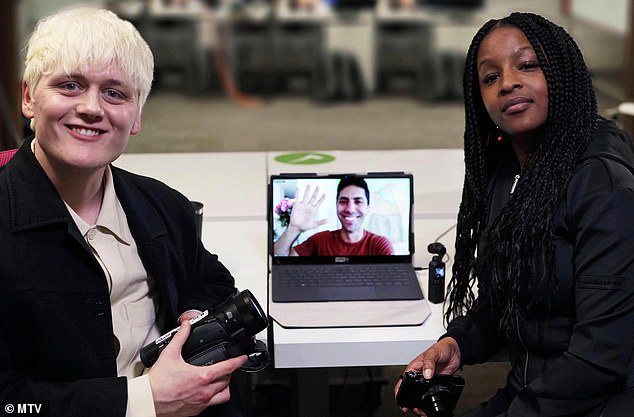 Hosted by radio and TV presenter Julie Adenuga and journalist and author Oobah Butler, each week Catfish UK will be helping love-struck hopefuls get to the bottom of their online relationships and uncover the truth of who they have been speaking to

Inspired by the hit US TV show, Catfish UK will aired it’s first episode on MTV on April 21 and is hosted by journalists Oobah Butler and Julie Adenuga.

The show sees hopefuls contact the hosts in order to help them meet someone they’ve fallen in love with online, but they often turn out to be someone different to who they claim to be.

The series comes after ten years and eight successful series of the US show, hosted by Nev Schulman and Kamie Crawford. While the original show has seen some people discover their online loves are real – often they aren’t who they say they are with shocking episodes revealing people Catfishing their ex-partners, family members and friends.

Some people have even pretended to be celebrities – including Bow Wow and Katy Perry – while others have been branded ‘serial Catfish’ after appearing on the show multiple times.

It’s the fifth international spin-off of the widely successful series, which has seen versions take place in Colombia, Chile, Brazil and Mexico.

The MTV show began as a spin-off of a 2010 documentary called ‘Catfish’ – created by Nev’s brother Ariel Schulman and his creative partner Henry Joost.

The documentary follows Nev, then 24, and working a photographer to meet Megan, a singer who he’s met online.

But after travelling across country to find her, he discovers Megan doesn’t exist and instead he’s been talking to a middle-aged housewife who spent most of her days caring for her two severely disabled stepsons and building a web of lies and dozens of fake profiles online.

Talking to Nev, Angela’s husband Vince tells the story of how cod were shipped along with catfish in the same tanks to keep the cod active, and ensure the quality of the fish, and says this is a metaphor on how there are people in everyone’s lives who keep them alert, active, and always thinking, which gives the documentary it’s name.

Two years after the low-budget documentary became a huge success, the Schulman brothers teamed up with MTV to make the show, with Max Joseph co-hosting the show until Kamie Crawford took over in 2020.

In 2014, the term ‘catfish’ was added to the Oxford English dictionary, thanks to the success of the show.

The pair then broke the news to Alex, who broke down in tears.

After being told of the phone call by Charles, Matt then text Oobah and arranged to meet up with the group.

Upon meeting Matt revealed he only knew Alex casually through liking social media posts and they’d never spoken on a dating app or through text.

‘We follow each other on Instagram but that’s as far as it goes, we haven’t been speaking on WhatsApp,’ he added.

Clarifying what was going on, Oobah explained that ‘Instagram Matt’ and ‘WhatsApp Matt’ were different people, and someone had used Matt’s photos to set up a fake dating profile and target Alex.

Alex had found the social media account of the person who’s identity had been stolen without realising it.

Frustrated at the lack of progress, Oobah then contacted Matt directly and they arranged to meet the person posing as Matt the next day at Hastings Castle, where Jess appeared.

Bewildered, Alex says he has no idea who she is, despite Jess claiming to know him.

‘I know you, don’t you remember me?’ Jess asked when meeting Alex.

She then explained she met Alex at a party in Hastings a year ago and had overheard him calling her boring, which made her furious.

Jess admitted to using a voice-changing app to ‘sound male’ and further complete her Catfishing.

‘It feel like s*** doesn’t it?’ Jess said to the confused hosts and hopeful.

Alex says he can’t remember meeting Jess and didn’t know ‘what the f*** was going on,’ before breaking down.

Despite being unapologetic and saying she wouldn’t change anything, Jess revealed the initial scheme did spiral out of control.

‘I didn’t mean to take it this far, but my anger got the best of me.

‘I’ve never done this before, but I like getting reactions online. It’s funny,’ she added.

As Jess was completely relentlessness, Alex, Oobah and Julie left her – but the four did catch up two months later in a video call.

After having time to reflect on her actions, Jess said she felt ‘really bad’ and apologised to Alex  but viewers were still left baffled by her actions.

‘LMFAOO watching #catfishuk and some woman’s been catfishing a guy for a year cause he apparently called her boring at a party,’ one shocked viewer said.

‘This girl on #CatfishUK needs locking up. A year long Catfish cause someone you don’t know called you boring!? Naaaaaaah,’ said another.

‘That’s like a karen to the next level mate,’ wrote a third.