Celebrities rally behind Emma Raducanu ahead of the US Open Final 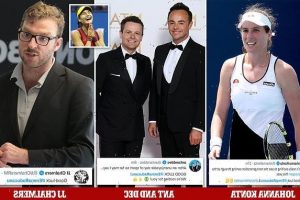 ‘We’re rooting for you!’: British celebrities from Ant and Dec to JJ Chalmers get behind tennis star Emma Raducanu ahead of her US Open final tonight

Celebrities are rallying behind British tennis sensation Emma Raducanu as she prepares to fight for a Grand Slam tittle.

The 18-year-old from South London is taking on her 19-year-old opponent Leylah Fernandez in a bid to win her first Grand Slam final after a fairytale string of victories saw her reach the top of the competition.

Already the player, who began Wimbledon ranked No 338 has earned a minimum £900,000 ($1.25m) from the nine matches won here, and now comes the chance to bank a place in sporting history. Staggeringly, she has yet to drop a set.

The debutant is the first qualifier ever to reach the final in New York, having played nine matches without dropping a set on her blazing journey to worldwide stardom.

Former British number one Johanna Konta and Ant and Dec led the shows of support for the British teen ahead of tonight’s game, alongside the Mayor of London Sadiq Khan. 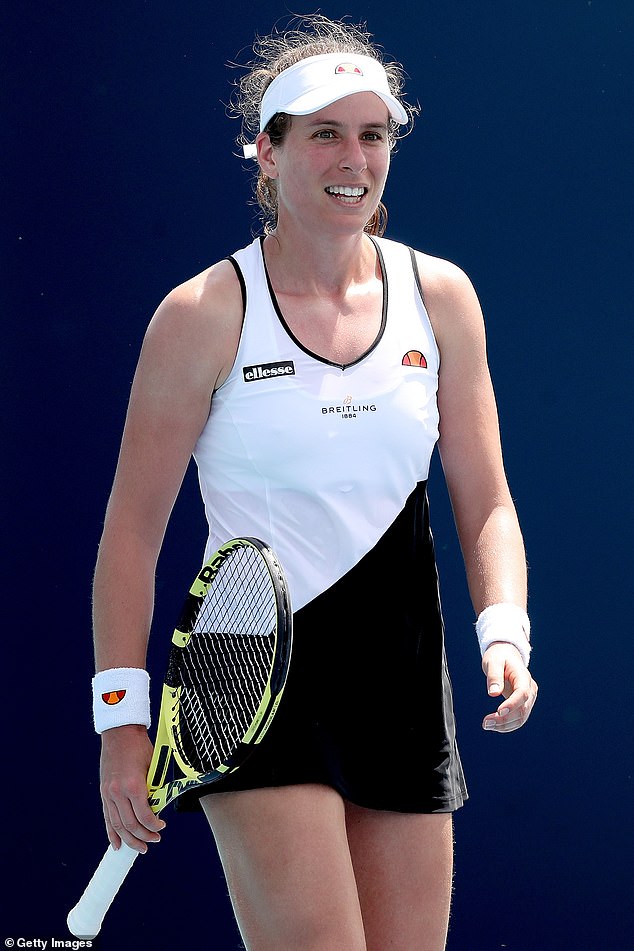 British celebrities have been cheering on Emma Raducanu, 18, ahead of tonight’s final of the US open, where she will face Leylah Fernandez, 19. Former British number one Johanna Konta, 30, pictured during this year Miami Open, wished luck to both Emma and her rival, praising the future of tennis 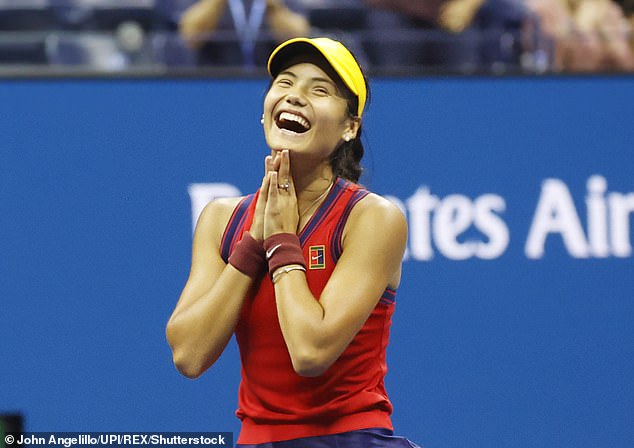 Emma is the first qualifier ever to reach the final in New York, having played nine matches without dropping a set on her blazing journey to worldwide stardom

Ant and Dec sent an enthusiastic message on Twitter, saying: ‘After an unenjoyable day of sport so far may I say… GOOD LUCK! We’re rooting for you.’

Johanna Konta, 30, who had to withdraw from Wimbledon this year when one of her team members tested positive to Covid-19, cheered both Emma and her opponent, celebrating the promising future of tennis.

‘It’s really exciting to see the next generation coming through at the this year. Good luck @EmmaRaducanu and @leylahfernandez,’ she wrote.

Army veteran and Strictly Come Dancing alum JJ Chalmers also cheered Emma on on Twitter today and said the match would be a ‘piece of history,’ 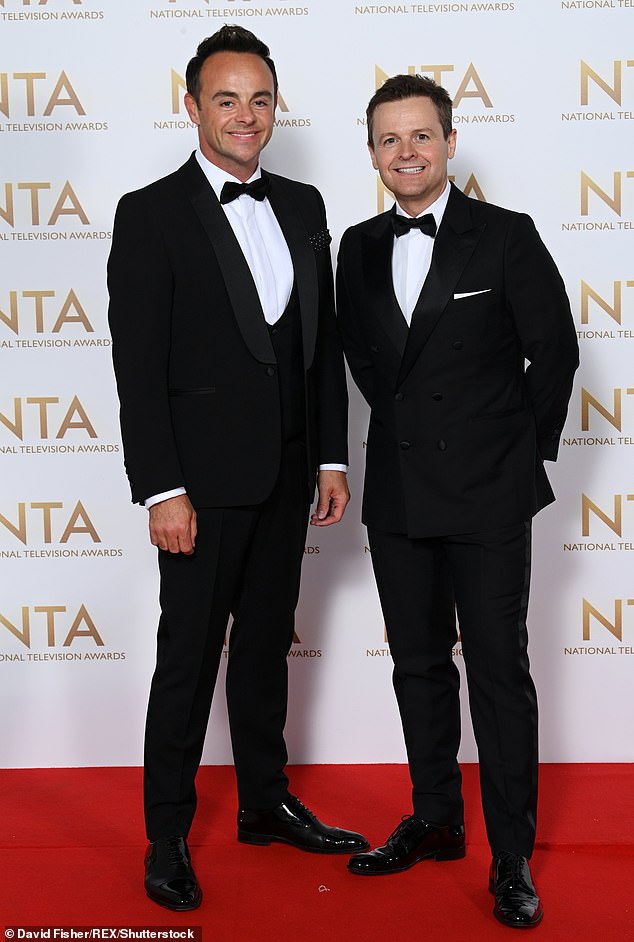 ‘Tonight isn’t just going to be a belter of a match, it’s going to be a piece of history, and now not only can we freely hear it on @5livesport but we will also be able to see it on @channel4 #PublicService Broadcast at it’s very best on court from 2100. Good luck #EmmaRaducanu,’ he said.

The Mayor of London also had words of supports for Emma ahead of the final.

‘Wishing @EmmaRaducanu the very best of luck in the #USOpenFinal this evening. We couldn’t be prouder of you.’ 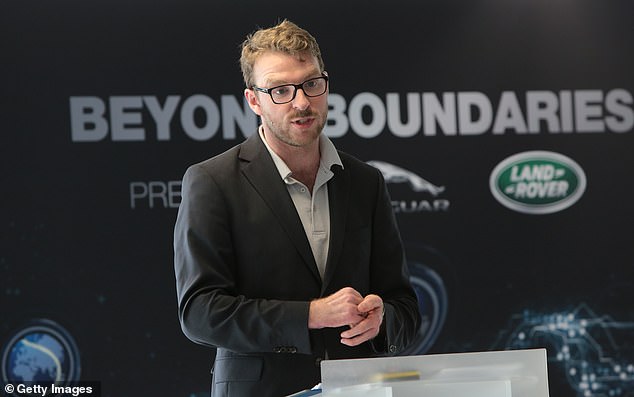 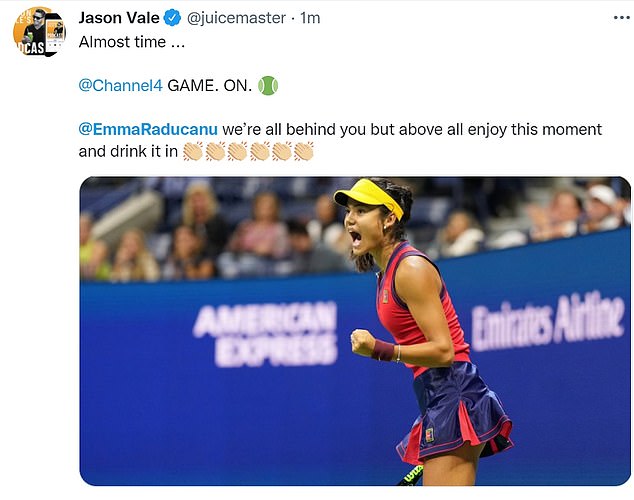 Author Jason Vale, also known as the Juice Master said:’ We are all behind you but above all enjoy the moment and drink it in.

Even retailer John Lewis was among those wishing Emma luck.

‘Anyone else nervous?! We’re all behind you Emma Raducanu. Imagine the racket we’ll make if you win,’ they wrote.

And singer Miles Kanes wrote: ‘Come on, Emma Raducan! You’ve got this, buzzing for this final.

Emma will aim to write the happiest of endings to her New York fairy tale when she takes on Leylah Fernandez in the final of the US Open on Saturday evening.

Not since Virginia Wade lifted her most famous title at Wimbledon in 1977 had a British woman even reached a grand slam singles final until now.

That the player to achieve the feat is an 18-year-old taking her first real steps in the professional game makes this one of the most extraordinary stories in all sport.

Former Team GB rower Steve Redgrave wrote: ‘Wishing Emma all the best this evening, it’s promising to be an extraordinary final, looking forward to watching this one.’

On the line is a prize cheque for £1.8million – more than eight times Raducanu’s current career earnings – as well as 2,000 ranking points, which would move the teenager up from her current standing of 150 to 23.

Even defeat would see Raducanu climb to 32nd in the rankings, putting her in contention to be seeded for her debut at the Australian Open in January.

EMMA RADUCANU’S RUN TO THE US OPEN FINAL

Fernandez has had a similarly seismic impact at Flushing Meadows, with her incredible run including victories over defending champion Naomi Osaka, another former winner in Angelique Kerber, fifth seed Elina Svitolina and second seed Aryna Sabalenka.

The Canadian is just two months older than Raducanu and the pair have known each other since they competed at under-12 level.

‘We first encountered each other because I was born in Toronto and she was Canadian, so we kind of made a little relationship back then,’ said Raducanu, who won their only previous meeting in the girls’ singles at Wimbledon three years ago.

‘Obviously since then we’ve both come very far in our games and as people. I’m sure it’s going to be extremely different to when we last encountered each other. But we’re both playing good tennis so it will be a good match.’

The pair share an immigrant background. Raducanu, who moved to the UK when she was two, has a Romanian father and Chinese mother while Fernandez has Ecuadorian, Peruvian and Filipino heritage.

The Canadian is coached by her father Jorge, who believes the final is a significant moment for the women’s game.

The former footballer said: ‘I see they’re both bringing a type of game that is not common right now on the circuit.

‘I see that they bring a flair that is very unique for them. I’m glad that they’re touching the Asian community. I think that’s a huge opportunity in the women’s game.

‘I think it’s just positive for the game. Obviously I want Leylah to win. That goes without saying. But I just think that the match-up and what we’re seeing, those two ladies are touching a lot of young girls.

‘I’m getting messages about, “Please pass this to Leylah”, little girls saying, “You’re making us believe”. This can only be good for the tennis game and the WTA altogether.’