Charles McCarry, a former C.I.A. agent who used his Cold War experiences to animate his widely admired espionage novels, notably “The Tears of Autumn,” a best seller about the assassination of President John F. Kennedy, died on Tuesday in Fairfax, Va. He was 88.

His son Caleb said the cause was complications of a cerebral hemorrhage caused by a fall.

The soft-spoken Mr. McCarry followed other former spies into writing fiction, a group that includes Graham Greene, Ian Fleming and David Cornwell, who writes under the pseudonym John le Carré. And over nearly 40 years, Mr. McCarry’s dense plotting, realistic detail and brisk writing style brought him a reputation as one of espionage fiction’s leading practitioners.

“McCarry is the best modern writer on the subject of intrigue — by the breadth of Alan Furst, by the fathom of Eric Ambler, by any measure,” the political satirist P. J. O’Rourke wrote in a review of Mr. McCarry’s “Old Boys” (2004) in The Weekly Standard.

“Old Boys” is the sixth of seven novels that center on Paul Christopher, an urbane agent for the Outfit (read: the C.I.A.), who first appeared in “The Miernik Dossier” (1973), an inventive tale told through letters, surveillance reports, diaries and transcripts of phone conversations. The Christopher character — Mr. McCarry’s equivalent of George Smiley — returned the next year in “The Tears of Autumn.”

“The Tears of Autumn,” Mr. McCarry’s biggest seller, reimagines the Kennedy assassination as payback by the South Vietnamese — using Cubans and the Mafia as go-betweens — for the White House’s role in the coup that led to the death of President Ngo Dinh Diem weeks before Kennedy was gunned down. Christopher travels the world to prove that his theory is correct.

“McCarry’s years as an undercover operative served him well,” the critic Patrick Anderson wrote in The Washington Post in 2005, when “Tears” was reissued. “Some of the novel’s best moments show Christopher meeting with a variety of revolutionaries, rogues and killers.”

He added, “The Christopher novels are brilliant, but their flaw is that their hero has no flaw — he is too good to be true.”

Although he described his undercover work — the dead drops, the cover stories, the clandestine rendezvous — as unglamorous and tedious, Mr. McCarry said he had surrendered to it as the foundation of his intricately plotted novels.

“If you’re a born writer — which, alas, I seem to be — it’s almost impossible to refuse experience,” he told The Post in 1988, adding, “Fiction depends on its facts being believable, so it’s always useful to know the way things work.”

Albert Charles McCarry Jr. was born on June 14, 1930, in Pittsfield, Mass., and grew up on the family farm in nearby Plainfield run by his father. His mother, Madeline (Rees) McCarry, was a homemaker who influenced him with her stories about her family and girlhood. 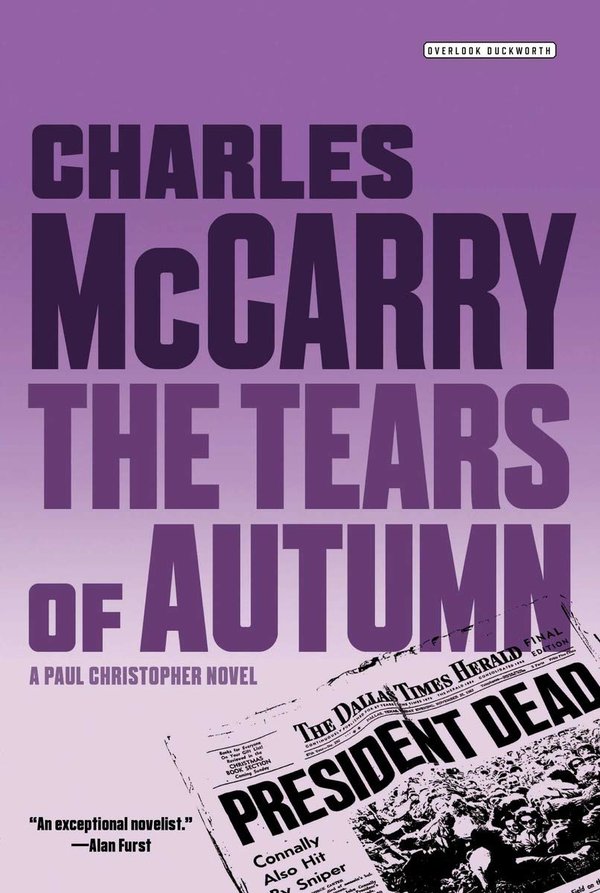 Too poor to afford the colleges that had accepted him, Mr. McCarry enlisted in the Army, where he wrote for Stars and Stripes and edited a weekly Army newspaper in Bremerhaven, Germany.

Moving to Manhattan after his discharge, he lived on Christopher Street in Greenwich Village and wrote a novel, which went unpublished; to earn money, he washed dishes at Sardi’s, the Theater District restaurant.

A trip to a wedding led to a job writing for a newspaper in Lisbon, Ohio, where he met Nancy Neill, his future wife. By 1956, while he was working at another newspaper, in Youngstown, he was introduced by an Army friend to James P. Mitchell, the secretary of labor under President Dwight D. Eisenhower. Mr. Mitchell hired him as a confidential assistant and speechwriter.

Two years later, he resigned from the Labor Department to write full time in Europe. But Mr. Mitchell found a way to keep him from leaving government by calling Allen W. Dulles, the director of central intelligence, and asking him to recruit Mr. McCarry for the C.I.A.

Mr. McCarry worked for nine years as a deep cover operative in Europe, Asia and Africa, always alone and never attached to an embassy.

He served in Ghana after it gained its independence from Britain in 1957; Germany when the Berlin Wall was being built; Vietnam around the time of the coup against Diem in 1963; and the Congo when he learned of Kennedy’s death. But his son said he never discussed operational details.

When Mr. McCarry was asked in 2004 to describe the type of identity he adopted while traveling in Africa for the C.I.A., he told The Morning News, a web magazine, with a laugh: “I was a nice young American who wanted to be helpful. And usually people were glad to accept the help.”

Mr. McCarry wrote several novels about spies and political intrigue that did not include Paul Christopher. He also wrote “Ark” (2011), a science fiction novel about an impending catastrophic earthquake.

His nonfiction books include “Citizen Nader” (1972), a biography of the consumer advocate Ralph Nader, and collaborations on three memoirs — two with Gen. Alexander Haig Jr., a chief of staff under President Richard M. Nixon and secretary of state under President Ronald Reagan, and one with Donald T. Regan, a Reagan treasury secretary and chief of staff.

In addition to his wife and his son Caleb, Mr. McCarry, who lived in Fairfax and died in a hospital there, is survived by three other sons, Nathan, William and John; five grandchildren; and three great-grandsons.

Otto Penzler, the publisher of Mysterious Press, who tried for decades to publish Mr. McCarry before acquiring his last few books, recalled in a telephone interview that Mr. McCarry had been prescient about the rise of suicide bombers (in “The Better Angels,” a 1979 novel), torture (which he called “enhanced debriefing” in “Second Sight” in 1991) and industrial espionage by the Chinese (“The Shanghai Factor,” published in 2013).

“He’s been called the American le Carré,” Mr. Penzler said, “but some believe le Carré should be called the British McCarry.”