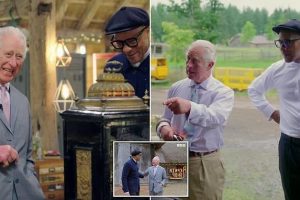 ‘Have you sorted this?’ King Charles playfully tells Jay Blades the ‘suspense is killing’ him as The Repair Shop team restore his beloved 18th century clock in a new trailer for BBC special

King Charles shared a laugh with Jay Blades and joked that the ‘suspense is killing him’ as The Repair Shop team restored his beloved 18th century clock.

In a new trailer for the BBC special, which airs on October 26, the monarch, 73, expressed his appreciation for experts; ability to breathe new life into antiques.

During his tour of The Repair Shop’s premises in Chichester, the King – who filmed the TV special before the Queen’s passing – stressed how important it is to preserve historical pieces.

Speaking to the show’s host one-on-one, Charles said: ‘Premierships are vital. I see the difference we can make.’ 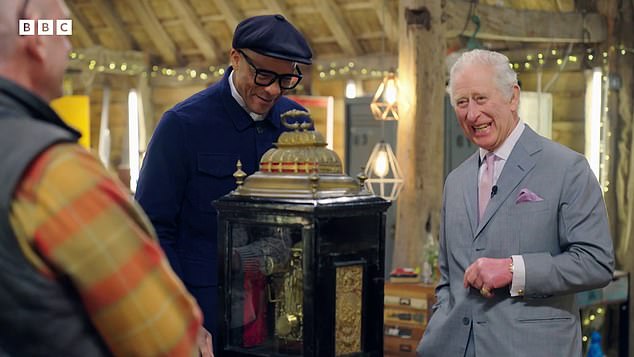 King Charles waited patiently for six months as experts restored a piece of pottery made for Queen Victoria’s Diamond Jubilee and a 18th century clock. The monarch looked thrilled to be reunited with the pieces 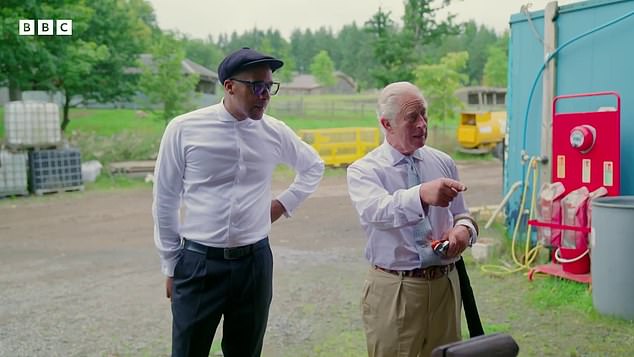 The King stopped to speak to other experts at work on The Repair Shop site. 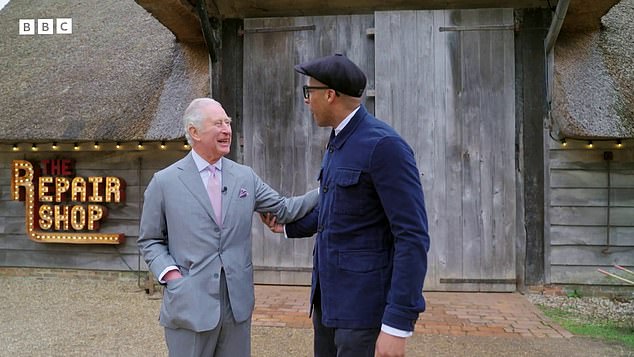 King Charles pictured with The Repair Shop host Jay Blades in March 2022. Jay said the monarch was a ‘joy’ to film with

In August 2021, Charles left his 18th century clock and a piece of pottery made for Queen Victoria’s Diamond Jubilee in the hands of the team.

After waiting patiently for them to be restored for six months, the King said he couldn’t wait to see how they how they’d got on.

Moments before the clock was unveiled, Charles said: ‘Have you sorted this? The suspense is killing me.’

Although the teaser trailer didn’t show the King’s immediate reaction to the restoration, he looked thrilled as he beamed at the antique. 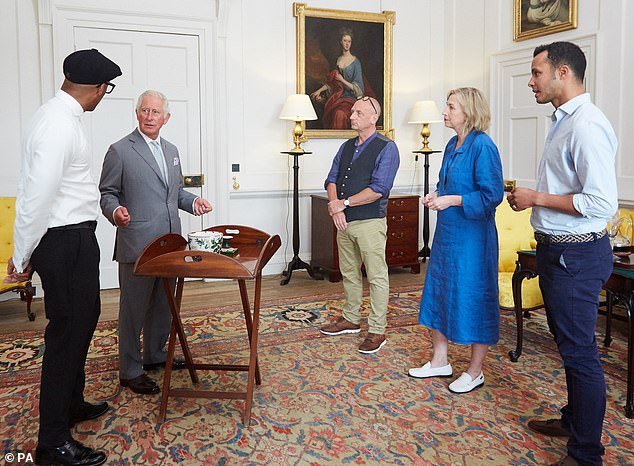 In the programme, Charles, pictured with Blades, Steve Fletcher, Kirsten Ramsay and Will Kirk, will meet with the show’s host Jay Blades and his expert team of craftspeople to explore their shared passion for preserving heritage craft skills 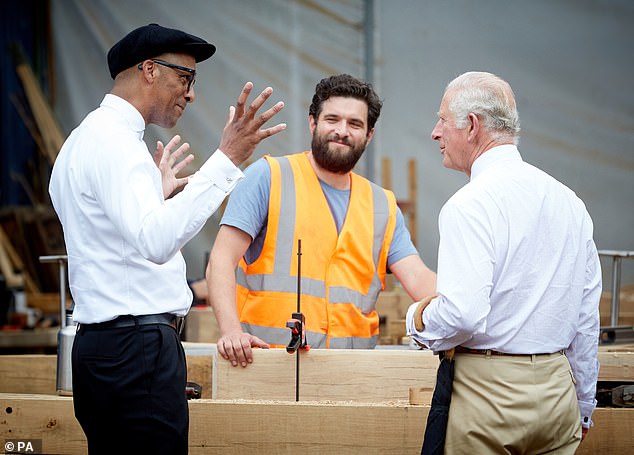 The team will also mend two precious items chosen by the monarch – a piece of pottery made for Queen Victoria’s Diamond Jubilee and a 18th century clock. Charles met with Jay and his team in 2021

Last year, Blades’ team, ceramics expert Kirsten Ramsay, horologist Steve Fletcher and furniture restorer Will Kirk were invited to Dumfries House in Scotland to meet the King, then the Prince of Wales, and learn about The Prince’s Foundation’s work in training the next generation of craftspeople.

‘We’re going to take these items to take a better look at them, and maybe you might join us at the barn,’ Jay told the sovereign.

Blades cheekily said: ‘I’ll put the kettle on,’ to which the King replied: ‘oh, will you?’

Speaking of the sovereign, Jay told the One Show: ‘I think it’s fair to say that he is a fan of the show, and he does come down to the barn. 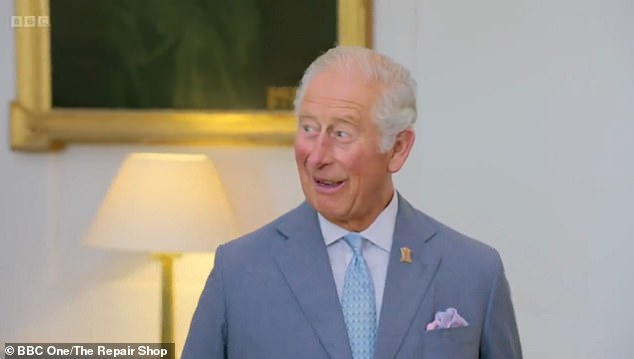 In spring 2022, Blades and the team welcomed the King to The Repair Shop barn to be reunited with the items. Charles (pictured earlier this year) was still the Prince of Wales at the time of filming

‘When you see King Charles in this show, you’re never going to see him like this, he was so relaxed, unbelievable, filming with him was such a joy, he was absolutely normal,’ he added.

Meanwhile, the collections manager of Dumfries House, Satinder Kaur, gives Kirk, Ramsay and Fletcher a tour of its collection of 18th century furniture and decorative arts.

BBC commissioning editor Julie Shaw said: ‘This is an incredibly special programme which has the magic that Repair Shop viewers have come to know and love. 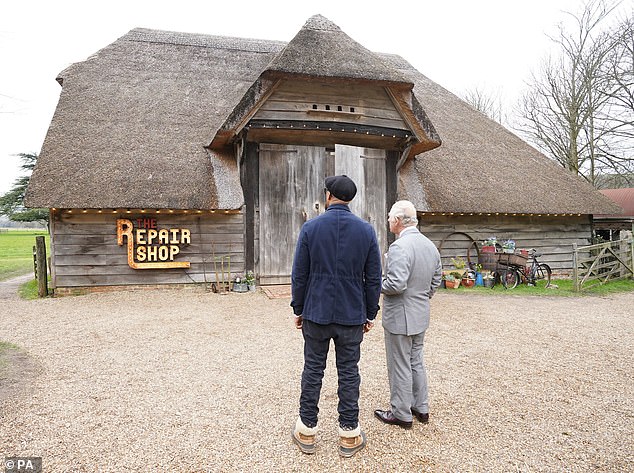 ‘People will see the former Prince of Wales as you rarely see him – and he is as captivated by the skills of the team who work on his items as any of our Repair Shop visitors.

‘The episode is a real treat and we hope that people enjoy it as much as we do.’

Kaur, collections manager for Dumfries House, said: ‘At The Prince’s Foundation, we are very proud to have partnered with The Repair Shop for this very special episode.

‘It was a joy to welcome Jay Blades and the talented restorers to our Dumfries House headquarters to explore our collection of 18th century furniture and decorative arts, including many examples of Thomas Chippendale’s work, which were a huge hit with the team.

‘They also met with students benefiting from our Building Craft Programme, which helps preserve heritage building craft skills that are at risk of being lost through education and training.

‘Over the past five years, The Repair Shop has done of a wonderful job of showcasing the skill involved in craftsmanship, and of highlighting the importance of repairing items, rather than replacing them, so it was a very natural collaboration.’

The programme was filmed between autumn 2021 and March 2022, before Charles became King following the death of his mother the Queen.

The special episode of The Repair Shop will air on October 26 at 8pm on BBC One.