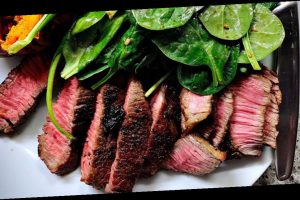 There are several ways of cooking the perfect steak and getting the right timings when you’re trying to perfect the temperature is key.

Christian Stevenson, also known as DJ BBQ, has mastered the art of cooking steak the right way and now he’s revealed how you could too.

The chef shot to fame on his YouTube channel where he shares his cooking advice and recipes, before publishing his own cookbooks and working with Jamie Oliver.

Now the expert has teamed up with supermarket giant Asda to detail his best tips for cooking steak ahead of the most romantic time of the year, Valentine’s Day.

According to Christian, everyone’s making one common mistake when they’re making the meat and it's all to do with the seasoning.

But you should only use salt beforehand and if you want some pepper that’s going to have to wait until it’s finished cooking.

He explained: “Always season the steak with salt before cooking, add pepper at the end when resting. Pepper can burn when the pan is hot and can make the steak taste acrid – no one wants that!"

The chef also stressed the importance of letting your steak rest before cooking, adding: “As meat is a muscle, you want to ensure it doesn't feel tense.

“So let it rest for half an hour before cooking. This will help with the texture of the steak and ensure all juices relax into the meat while cooking."

Christian continued: “If you're cooking Ribeye or Sirloin, both meats will have lovely ribbons of fat.

“A good tip is to take a sharp knife and slice into the fat, this will help give it a head start when cooking. You want the fat to render and cascade of the meat. Fjords of flavour!"

Asda worked with DJ BBQ to celebrate the move of its entire steak range into 100% recyclable cardboard trays.

The move will result in the removal of all 23 million black plastic trays each year across its entire Extra Special, Butchers Selection and Farm Stores lines.

END_OF_DOCUMENT_TOKEN_TO_BE_REPLACED

END_OF_DOCUMENT_TOKEN_TO_BE_REPLACED
We and our partners use cookies on this site to improve our service, perform analytics, personalize advertising, measure advertising performance, and remember website preferences.Ok