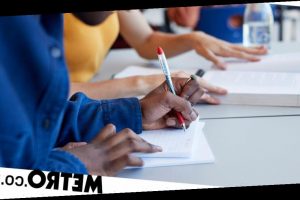 School children in the UK can complete their GCSE in English Literature without studying a single book by a Black author.

The largest exam board in the country does not feature a text by a Black author in and includes just two books by ethnic minority authors, according to a new report by Teach First.

As a result, the charity is launching a new campaign calling for a more inclusive education system, having found that a pupil could finish secondary school without studying a single book written by an author who is not white.

In its report released today, Teach First has found that nearly all teachers (98%) believe it is ‘important’ or ‘very important’ that books written by ethnic minority authors are studied as part of the English curriculum in secondary schools

Three quarters (75%) of English teachers have concerns about a lack of ethnic diversity in the curriculum as a whole across schools.

Over a quarter (27%) of headteachers say students have raised concerns about a lack of ethnic diversity in the curriculum with them.

Frida Arthur, is an English teacher a Wreake Valley Academy in Leicester. She believes that her subject lacks racial diversity, and she says education in the UK is ‘whitewashed’.

‘Not only is education in this country extremely white, but there also aren’t very many teachers from BAME communities in the UK, and I imagine that most BAME teachers are in and around London,’ Frida tells Metro.co.uk.

‘This creates a huge problem for BAME pupils outside of London because they may not have any role models in school that look like them.

‘I’ve also found that schools with a predominantly or completely white staff, can overlook introducing non-white materials into their lessons and if they do, aren’t completely confident on the appropriate language, or even have the understanding to deliver the material in a manner that makes it meaningful.

‘In other words, in some schools, it is simply a tick-box activity. This is why I believe all teachers need special training on the issue of race. This would help to give all teachers the confidence needed to address racism in class – and ultimately to create meaningful and engaging classes for our pupils.’

In her teaching career, Frida has begun to see texts from non-white authors introduced, but she says this has to be just the starting point for truly diversifying what children are learning.

‘While this is a great step forward, I do take issue in the fact that the context can often feel “superficial” when addressing racism,’ Frida says.

‘I’ve found that it’s common for schools to only focus on works by ethnic minority authors that highlight historical racism in the form of the n-word or the topic of slavery.

‘While this is of course important to acknowledge, I find that so many other aspects of the issue can get lost. We don’t often explore texts that speak of the lesser acknowledged, day-to-day and nearly invisible instances of systematic racism that continues to exist today.’

‘I would argue that this is just as important in predominately white schools outside of London,’ says Frida. ‘Which is why when teaching in my previous school in Kent I really enjoyed encouraging discussions around racism and racial identity when teaching John Agard’s poem “Half-caste”.

‘If given the right support, these kind of discussions could become part of everyday school life, opening up a dialogue on harder to approach subjects like racism and bridging gaps between pupils and teachers of different ethnic backgrounds.

How to make the curriculum more diverse

The charity is recommending:

We tend to talk about racism like it is a distant and ancient issue and I think by not talking about it with our pupils, we further reinforce that notion.’

To tackle this problem, Teach First is calling for exam boards to ensure that at least a quarter of authors in their GCSE English literature specifications are from ethnic minority backgrounds.

The charity argues that addressing this under-representation could play a key role in widening all young people’s horizons, supporting them to develop a love of literature and get the grades that will open doors later in life.

‘Many years on and in the wake of worldwide attention on the Black Lives Matters movement, it’s a tragedy that this is still the case for many young people today.

‘Representation matters and the classroom is the perfect place to show children that people from all backgrounds deserve to tell and star in the stories our society celebrates. But instead we’re normalising marginalisation.

‘Many teachers, in spite of the system, include authors from a range of backgrounds in their lessons, but we need to get behind them to make this the norm, not an exception.

‘It would help to not only unlock a love of literature in children– but also help to build a more cohesive society based on mutual respect and understanding.’

Teach First argues that the texts pupils study must continue to include the literary classics studied today, but urgent support is needed to give children access to additional brilliant books by ethnically diverse authors.

Do you have a story to share? We want to hear from you.

END_OF_DOCUMENT_TOKEN_TO_BE_REPLACED

END_OF_DOCUMENT_TOKEN_TO_BE_REPLACED
We and our partners use cookies on this site to improve our service, perform analytics, personalize advertising, measure advertising performance, and remember website preferences.Ok