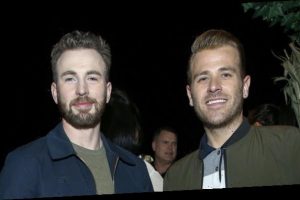 With salons and barbershops closed, self-isolated individuals may find themselves contemplating bangs, but others are dealing with the very real need for an actual haircut. One of those people? Scott Evans, star of Sell By and brother to one Chris Evans, who took it in his own hands — to unsatisfying results. The solution? Enlisting his big bro to touch it up and make it right.

“I’m really doing this,” Scott said in a clip he posted over the weekend. “Ugh! Here we go. Is this a good idea?”

After he shared the finished product on Instagram, people noticed that he missed a spot.

"Couldn’t be cuter if you tried. But ya missed a spot,” actress Kate Lambert commented on the post. Scott replied, “Don’t worry @itskatelambert, my brother helped me even it out." And there's video evidence.

Scott shared the video on Twitter, which showed his brother getting the missed spot and cleaning up the whole cut. The way he moves with the clippers may be a sign that he's been there himself — something that Scott's followers pointed out, saying that the Evans brothers could the hottest buzz cut-boasting bros around.

There's no video of Chris buzzing his own hair just yet. And since he was wearing a baseball cap in Scott's video, there's no telling what he's got going on with his own hair. It could be just a matter of time before we all get another Evans buzz — and Scott gets to try his hand at barbering one more time.

END_OF_DOCUMENT_TOKEN_TO_BE_REPLACED

END_OF_DOCUMENT_TOKEN_TO_BE_REPLACED
We and our partners use cookies on this site to improve our service, perform analytics, personalize advertising, measure advertising performance, and remember website preferences.Ok