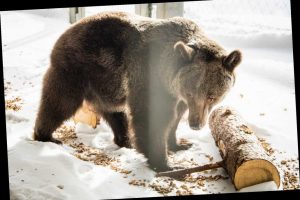 Jambolina the circus bear is getting a fresh start in life after being rescued from her "tiny cage" in Ukraine and transported to a bear sanctuary in Switzerland.

On Dec. 8, rescuers from the global animal welfare organization Four Paws freed the 11-year-old bear from a cage in her previous owner's garage.  Jambolina had been locked up in the garage for months because the COVID-19 pandemic shut down all circus shows, according to a press release.

Four Paws teamed up with the Arosa Bear Sanctuary for the rescue and arranged the four-day journey necessary for Jambolina to safely travel from Ukraine to the Swiss sanctuary via Poland, Germany, and Austria.

"Transporting a bear across four national and two EU borders is a big challenge, even more so in COVID-19 times. We had to ensure Jambolina’s wellbeing at all times while a lot of paperwork and controls were needed for the logistical part of the transfer," Barbara van Genne, responsible for Wild Animal Rescue and Advocacy at Four Paws, said in the release.

After traveling across four countries to reach Switzerland, an aerial cable car then transported Jambolina to the Arosa Bear Sanctuary where a snow groomer brought the bear safely through towering snow masses to her new forever home.

Jambolina safely arrived at the site on Dec. 11 where she was met by locals and team members cheering for her arrival. Van Genne noted that Jambolina's previous conditions in Ukraine were "far from species-appropriate" and had negatively impacted her health.

Katharina Braun, a spokesperson for Four Paws International, also told Newsweek that the cage was so small that Jambolina couldn't even "stand upright or move around."

"Her teeth are in bad condition and her claws need further examination. For the time being, she will remain in an adaption enclosure so that the team of animal caretakers can observe her," Van Genne continued. "Through targeted food distribution, she will be accustomed to the rhythm of hibernation and hopefully regain her natural instincts."

"It is incredibly beautiful to see what Four Paws, in cooperation with Arosa Bear Sanctuary, is achieving with the rescue of Jambolina," Pascal Jenny, president of the Arosa Bears Foundation, said. "We can offer a wild animal that has been caged for a long time the space she needs and thus give her a new start in life."

She added, "The fact that we are also bringing so much joy to countless families, school classes, grandparents, guests, locals, and all bear fans at the same time is, of course, all the more wonderful."

END_OF_DOCUMENT_TOKEN_TO_BE_REPLACED

END_OF_DOCUMENT_TOKEN_TO_BE_REPLACED
We and our partners use cookies on this site to improve our service, perform analytics, personalize advertising, measure advertising performance, and remember website preferences.Ok