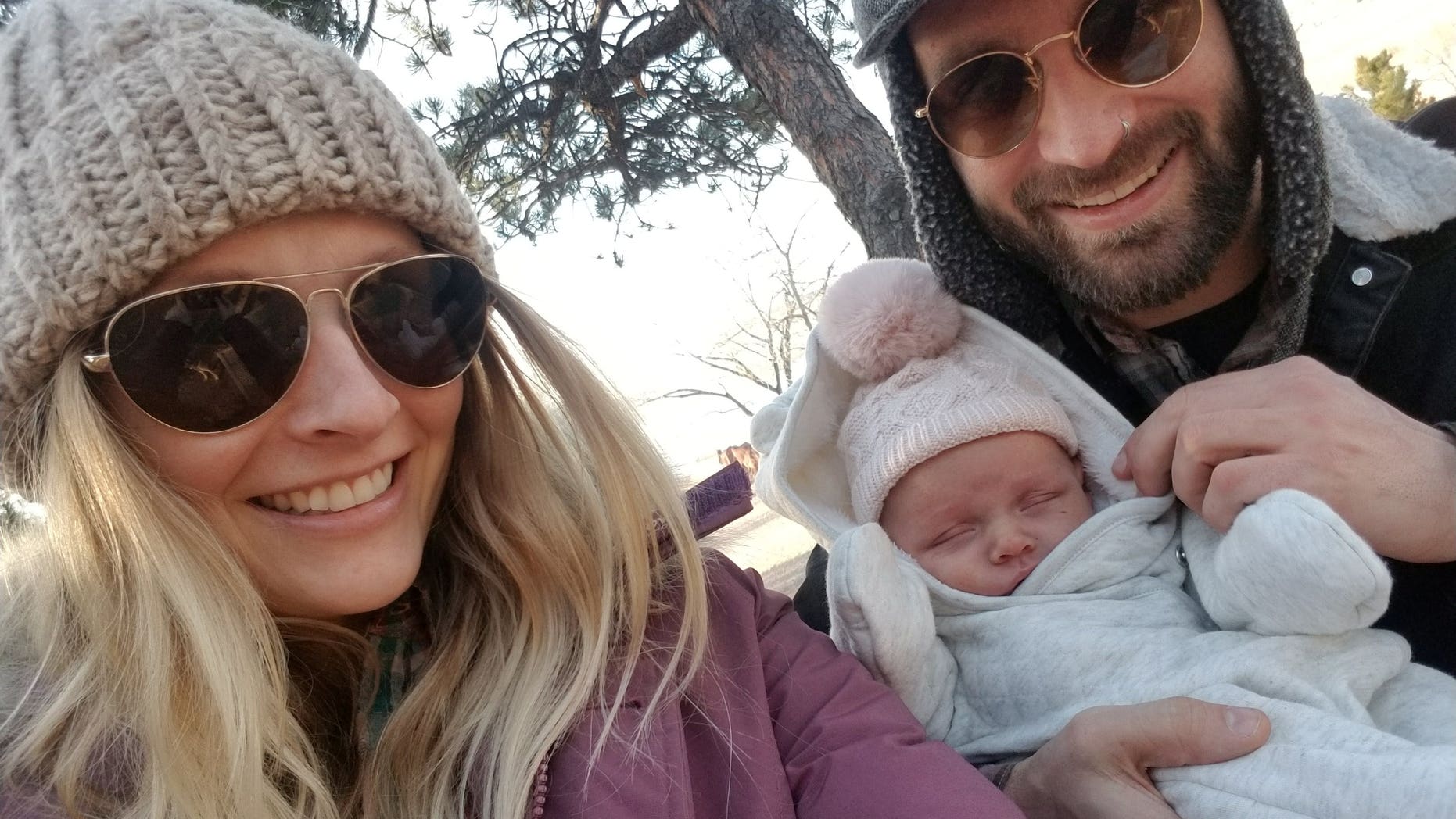 Taylor Smith, pictured with his baby Hazel and fiance Michelle Arnold, did not realize he was colorblind until he failed a test on Facebook.
(SWNS)

A colorblind man used a special pair of glasses to see his girlfriend’s blue eyes for the first time after getting down on one knee to propose. Taylor Smith, 31, first realized he was colorblind in his mid-twenties when he failed an online test.

The restaurateur, who has been with his partner Michelle Arnold, 33, since 2016, decided the time was right to propose after their daughter Hazel was born last December.

Smith of Loveland, Colo., dreamed of proposing to Arnold with a gemstone to match her eyes, but he was yet to see the true color of her eyes.

The dad-of-one enlisted jeweler Timothy White of Darvier Jewelry Design Studio in Fort Collins to help him with the task.

The jeweler ordered a shipment of EnChroma glasses, that enable colorblind people to see in technicolor. The ring was made with a blue sapphire to match Arnold's eyes, but Smith waited until the day he proposed to wear the revelatory glasses for the first time.

“It was so beautiful to see her eyes for the first time. They were so beautiful, like the ocean," he said. “I could see her face flush as I got down on one knee, which I had never been able to see before. It was an amazing experience,” added Smith, who popped the question to Michelle in June 2017, but has only just made the video public.

“Taylor wanted an engagement ring with a stone that matched his girlfriend’s eyes, so I picked out a sapphire for him and purchased EnChroma glasses so he could propose and experience the color of her eyes and the sapphire all at once," he said. "It was really special.”

Arnold was delighted when Smith asked to marry her.

“I honestly had no idea,” she said. “All of a sudden he asked me if he could ask me a question and I said ‘go ahead’, then he got down on one knee…it was overwhelming.”

The couple plan to get married in Sept. 2019, a day which will be full of color thanks to Smith’s new glasses.

"I didn’t realize that I was colorblind until about five years ago," he said. "Growing up I would have minor disagreements about the color of things, but I never put two and two together. "I have problems with red and green. People would tell me they loved my green pants and I would be like 'What are you talking about’? I was scrolling Facebook a couple of years ago and there was a test to determine if you were colorblind. I did it and I failed miserably."

"That was a hard thing to accept," he said. "There’s a realization that you just don’t see things like everybody else. I wear my glasses all the time now, they’ve really enhanced my life."

"He’s like a little kid when he wears the glasses sometimes," Arnold said. “He’ll go ‘Oh wow’ when we see a red barn, because that would have been brown for him before. I’m so excited to spend the rest of my life with Taylor."