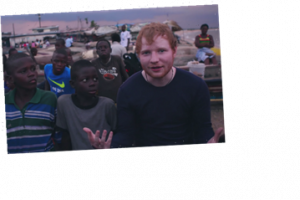 Major UK charity Comic Relief, founded in 1985 by Lenny Henry and Richard Curtis in response to famine in Ethiopia, says it will stop sending celebrities to Africa for fundraising appeals due to recent criticism.

Celebs including presenter Stacey Dooley and Ed Sheeran have been branded “white saviors” for making videos in poverty-stricken villages. Dooley travelled to Uganda last year and pictures of her holding a young boy were labelled “tired and unhelpful stereotypes” by Labour MP David Lammy. Sheeran’s trip to Liberia in 2017 for the org was similarly called “offensive and stereotypical”.

“The world does not need any more white saviors,” Lammy was quoted as saying, adding that picture conjured “a colonial image of a white, beautiful heroine holding a black child, with no agency, no parents in sight”.

Curtis and Henry have both since suggested that the organization will move away from its traditional approach of celebrity-fronted campaign films towards a local approach using filmmakers from Africa to make more authentic pieces.

“A lot has changed over Comic Relief’s 35 years, and so the way we raise money and talk about the issues we are here to tackle, and the people we are here to support, must change as well,” said Henry today.

“African people don’t want us to tell their stories for them. What they need is more agency, a platform and partnership.

“Investing in local talent across Africa to tell stories from their communities is great and a much-needed step forward, but as always there is more that can be done. The energy and passion for change and new perspectives is there in bucket loads,” he added.

END_OF_DOCUMENT_TOKEN_TO_BE_REPLACED

END_OF_DOCUMENT_TOKEN_TO_BE_REPLACED
We and our partners use cookies on this site to improve our service, perform analytics, personalize advertising, measure advertising performance, and remember website preferences.Ok