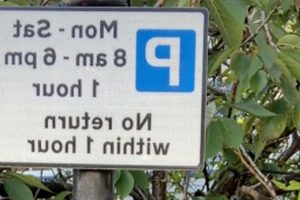 A driving instructor has explained a common road sign that some people never fully understand.

In a recent clip she looked at a parking sign that allows drivers to park free of charge for a short period.

She explained: "I've been asked to explain signs like this one.

"This sign is saying that between Monday and Saturday, you can park between 8am and 6pm – but only for one hour.

"'No return within one hour' that simply means you are not allowed to drive out of your parking space, drive around the block and go straight back into the same parking space.

"Well not for an hour anyway."

Annie added that at other times, you can "park for as long as you want to".

Viewers were surprised and shared their thoughts in the comments.

One said: "I never knew! I always thought no return within one hour meant you're not allowed to come back to the car for at least an hour."

Another wrote: "I always thought it meant you couldn't leave for one hour after parking."

"I've always wondered with these, if I'm there before 8am, can I stay until 9am?" a third added.

A fourth suggested a change in the sign, saying: "How much harder would it be for them to just say 'Do not return within one hour'?

Others pointed out that the restriction applies not just on the specific parking spot, but also the whole marked area on the same stretch of road.