Their wedding bands are out of this world! Couple discover fragments from a METEORITE in their rings

A retired US Navy Seal who discovered a five-billion-year-old piece of meteorite decided to put it to good use – by popping the question with a ring encrusted with the space rock.

When a meteor exploded in the atmosphere over Michigan, USA, in January – showering the earth below with fragments – Christopher Rogers and his partner Ashley Moritz went hunting for interplanetary material.

Ashley, 34, found the 50g space rock hidden in a snowbank on a frozen lake in Hamburg Township, where the Zukey and Strawberry lakes meet.

When their rock – which the couple had authenticated – failed to sell at auction, Christopher decided to re-purpose it in the most romantic way; in an engagement ring for Ashley.

He said of his proposal: ‘Ashley is unique and only a totally unique ring would do.’

They tied the knot two months later in an intimate ceremony in their backyard – making sure their rings contained matching pieces of meteorite. 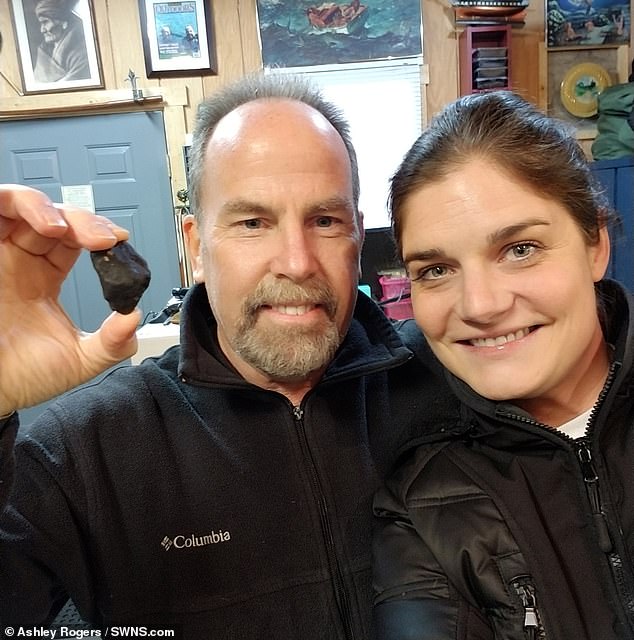 Christopher Rogers and Ashley Moritz discovered the five-billion-year-old meteorite following a shower earlier in the year in the home town of Royal Oak, Michigan, US 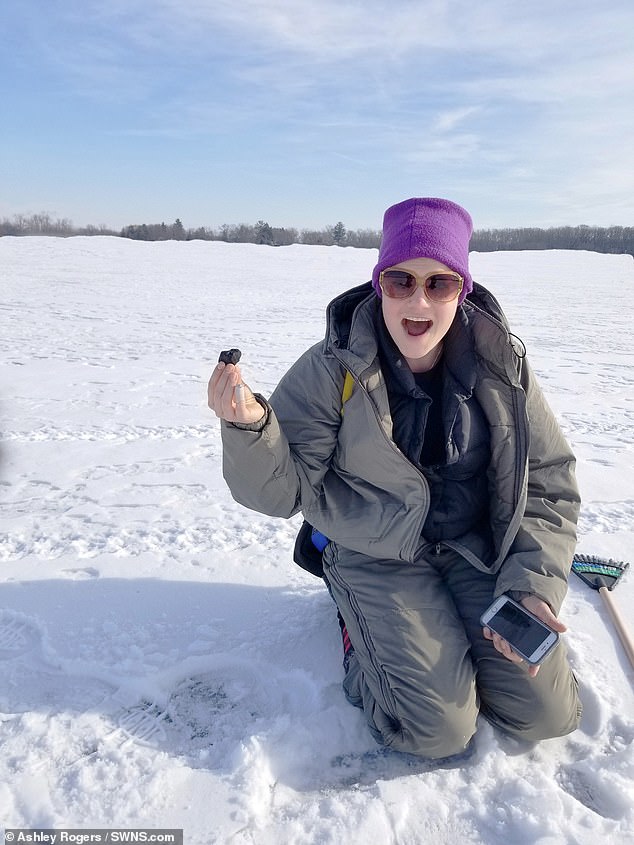 Ashley, 34, found the 50g space rock hidden in a snowbank on a frozen lake in Hamburg Township where Zukey and Strawberry lakes meet

The couple, of Royal Oak, Michigan, had the rock authenticated and sent to the UK to be sold through upmarket auction house Christie’s.

The retired navy seal stunned Ashley by popping the question with an engagement ring featuring a fragment of the space rock.

He said: ‘I was a typical man trying to figure out how to propose to the woman I love.

‘Ashley is unique and only a totally unique ring would do.’

They tied the knot two months later in an intimate ceremony in their backyard where Ashley was walked down the aisle by her beloved dog Toby, a 12-year-old labrador beagle mix.

Ashley said: ‘It was the perfect day made even better by our rings. ‘It ended up being a really cool way to keep a memory of this once-in-a-lifetime experience together.’ 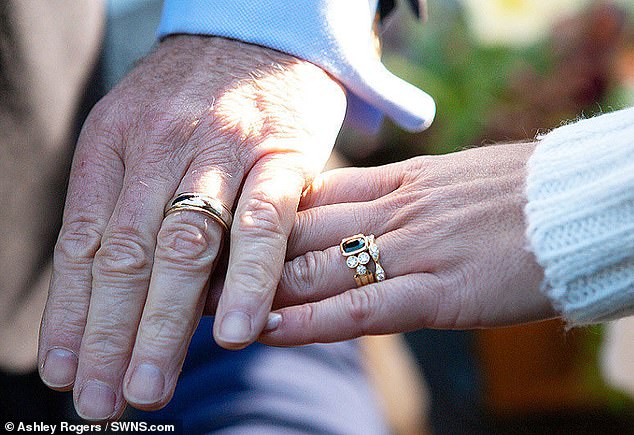 Deciding to make romantic use of the rock when it failed to reach a reserve price at Christie’s auction in London fo $12.000 (£9,583) Christopher used fragments of it and had them embedded in an engagement ring

The couple, who met in 2013 when they were next-door neighbours, have always enjoyed adventurous pursuits like scuba diving, metal detecting and treasure hunting.

When a fireball appeared in the Michigan sky on 16 January and NASA confirmed it was a meteor, Christopher couldn’t wait to hunt for meteorites.

A meteor is a rocky object that burns and vaporizes upon entry into the Earth’s atmosphere.

If a meteor survives plunging through the atmosphere, it breaks up into matter known as meteorites.

Ashley, who runs an estate sales business, said: ‘My husband heard the meteor. I was out with girlfriends and didn’t hear a thing.

‘He sent me a message, saying: “Did you hear that giant boom?” It came down 40 miles away from our house.

‘We were watching the news and it said that people were going out and looking for pieces.

‘It was the middle of winter and Chris said: “Let’s go looking”.’ 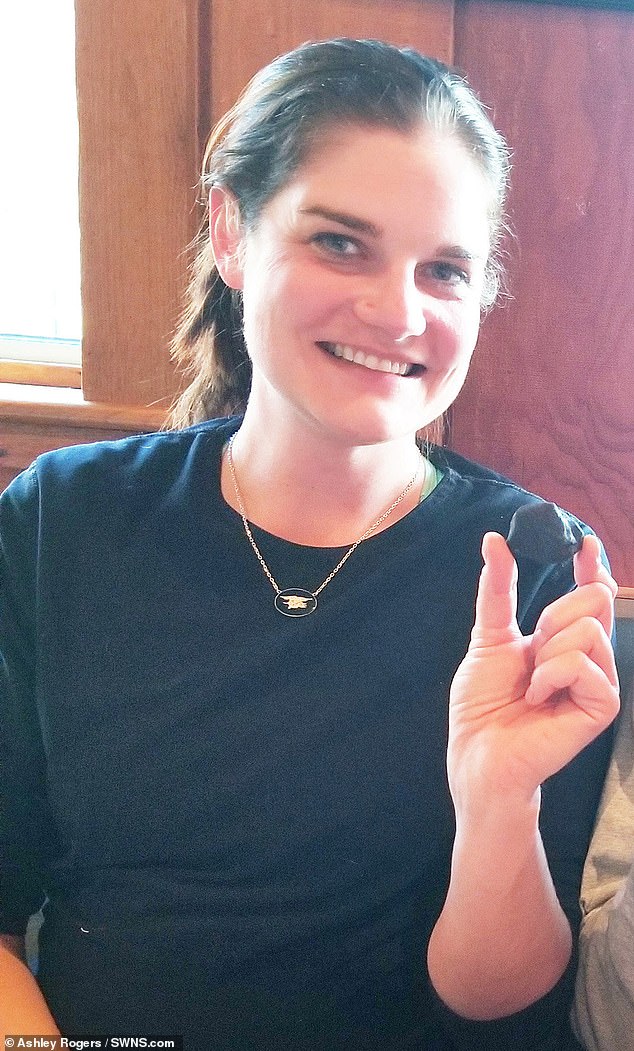 The couple trekked out but had no luck on their first day of hunting. Christopher insisted that they return and look again.

Ashley said: ‘I thought it was flipping freezing and the chances were ridiculous but I said: “Ok, honey, let’s go again”.

‘We went out walking on a frozen lake and I found it in a pile of snow. There were dark leaves everywhere and every time I saw a piece that was dark, it was a leaf.

‘But then I reached down and grabbed it and yelled: “Oh my God, this is not a leaf, it is a rock!”

‘It was magnetic and it looked like a burnt rock.’

The couple took their find to John Zawiskie, the Curator of Earth and Life Sciences at Cranbrook Institute of Sciences in Bloomfield Hills, Michigan, who confirmed it was a meteorite and a staggering 4.75 billion years old.

Mr Zawiskie said: ‘It was absolutely a meteorite. ‘This is really primitive material of the solar system, made up of spherical beads that contain the same minerals that make up the mantle of the earth.

‘Some of the components are probably 4.75 billions years old.’ 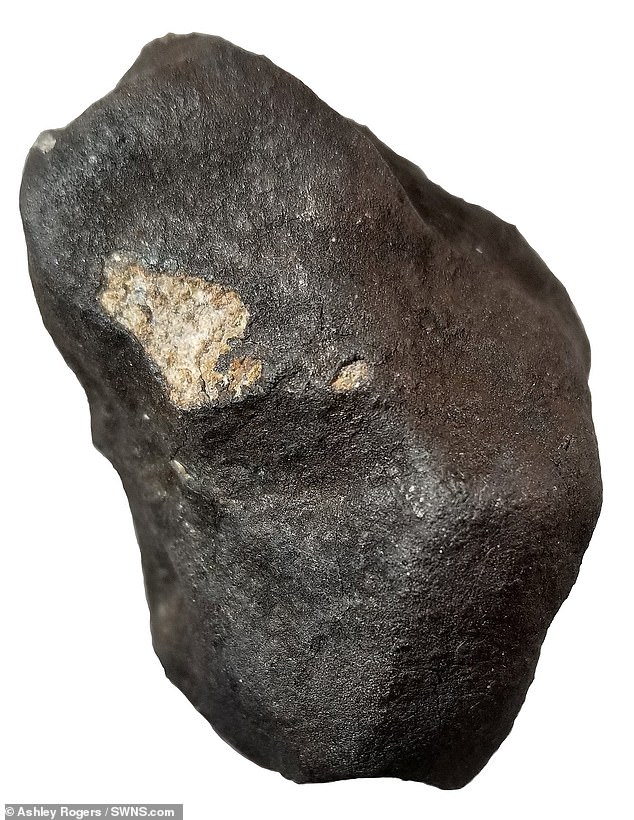 The Curator of Earth and Life Sciences at Cranbrook Institute of Sciences in Bloomfield Hills, Michigan, John Zawiskie, confirmed it was a meteorite and a staggering 4.75 billion years old

Christopher and Ashley decided to sell the rock through Christie’s in the UK.

Christopher said: ‘Things started moving pretty fast when we were approached by Christie’s who suggested that we sold the meteorite.

‘The next thing you know we are shipping the meteorite off to New York for a short display at the Rockefeller Center.’

When the rock did not reach its reserve price at auction, it was returned to the couple as Christopher was planning his proposal.

He said: ‘When Ashley’s meteorite returned, I saw the look of happiness in her eyes and that’s when my plan started to materialize.

‘I wanted a ring that paid tribute to Ashley’s stunning green eyes, the six years we had under our belt and a one-of-a-kind piece of rock older than the Earth itself.’

He chose a green gemstone called a Tsavorite to match Ashley’s eyes and added six diamonds to represent their years together. 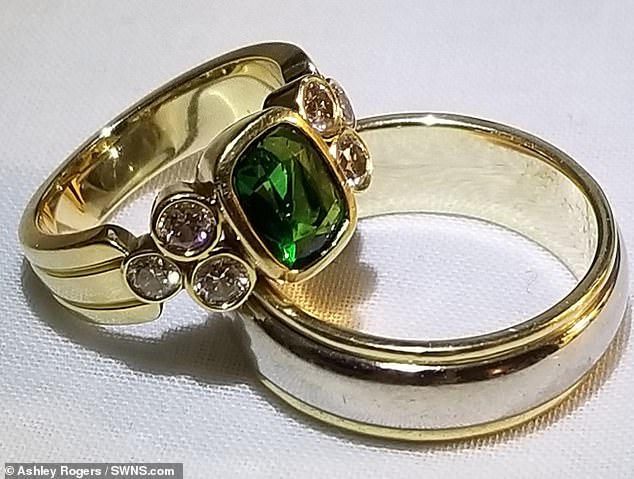 When a fireball appeared in the Michigan sky on 16 January and NASA confirmed it was a meteor, Christopher couldn’t wait to hunt for meteorites and ended up making something special

Christopher’s friend Ron Cleveland, a jeweller, made the ring and embedded a small piece of Ashley’s meteorite inside the band.

It was the first time Cleveland, who owns Skyline Diamond Setters in Troy, Michigan, had worked with a meteorite.

He said: ‘It was difficult and tricky because it was the first time I had put a meteorite into any piece of jewellery.

‘We had to fit the setting just perfectly to inset that little piece of meteorite without damaging it at all.

‘We sealed it in there and hopefully it will be in there for the rest of their lives.’

The couple spent 4 July at Virginia Beach where Christopher popped the question in front of the Navy SEAL monument.

Ashley was so taken with her meteorite ring that she insisted Christopher had a piece in his wedding ring as well.

She said: ‘I knew he needed a piece in his ring as well and so we have unique, matching rings.’