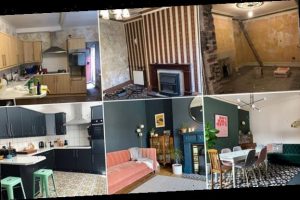 DIY-savvy couple reveal they transformed damp and dated £312,000 property which was a ‘total wreck’ into an Insta-worthy three-bedroom home for £40,000 by doing most of the work themselves

A couple have revealed how they completely transformed their dingy and damp home – described as a ‘total wreck’ into an Insta-worthy modern abode.

The property, which did not have central heating, was in desperate need of an update having been left untouched for the past 40 years.

The couple began renovating almost immediately and have since splashed out between £30,000 to £40,000 turning the run-down property in a stunning home. 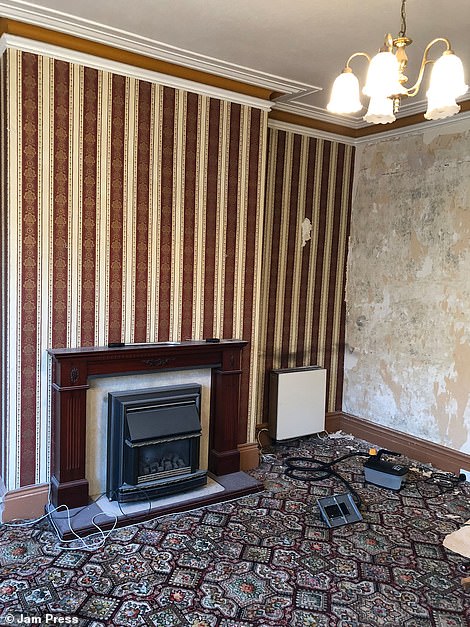 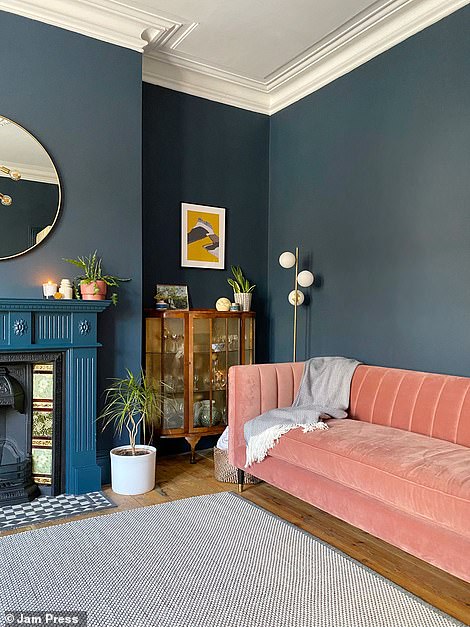 Kievah Wallace, 35, lives with husband Jamie Wallace, 34, and their daughter, Ruby, 18 months, in Newcastle-upon-Tyne. They bought the property, which was in need of an update, for £312,000 in December in 2018 (pictured:  left, the living room before the transformation, and right, after)

Kievah said: ‘When we first bought the house, it had been in the same family since at least the 70s and was in drastic need of refurbishment.

‘It wasn’t even in a liveable state so we had to start renovations straight away.

‘It didn’t have central heating, had dampness and needed a full re-wire so we started with those jobs first.

‘The first complete room was the bathroom which we had to complete so that we could move in.’ 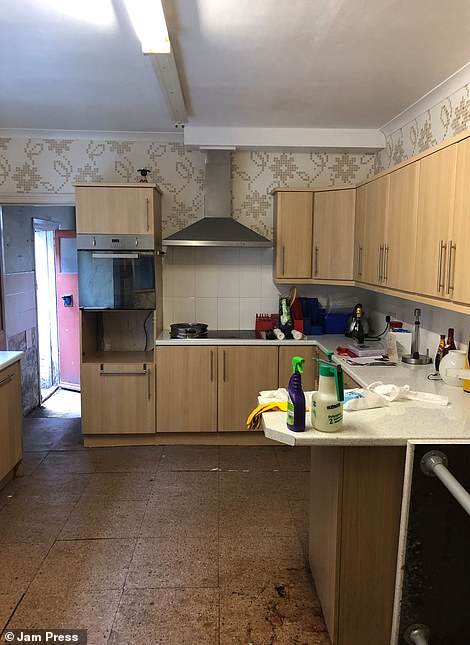 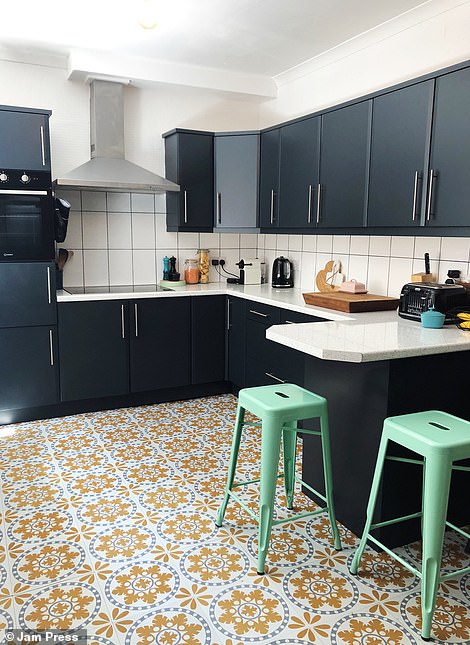 Kievah said that when they bought the house it had been in the same family since at least the 70s and it was in desperate need of an update (pictured left: the kitchen before the renovation and right, after)

Kievah and Jamie began by stripping the house right back and rebuilding it, which included installing central heating, re-wiring, damp-proofing, knocking walls down and then getting the whole house re-plastered.

She revealed: ‘It was a long and messy process but so satisfying to be able to have a blank canvas to work with.

‘I used the Roomle app to plan layouts and schemes throughout and that was so helpful, especially in being able to provide a visual representation of what crazy thoughts were in my head.’

The couple got tradesmen in to do the damp-proofing, electrics and plumbing, but were able to do the majority of the work themselves to save money – with a little help from Kievah’s father. 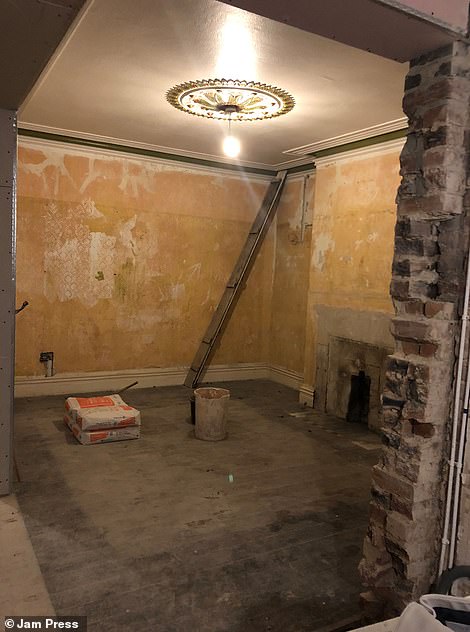 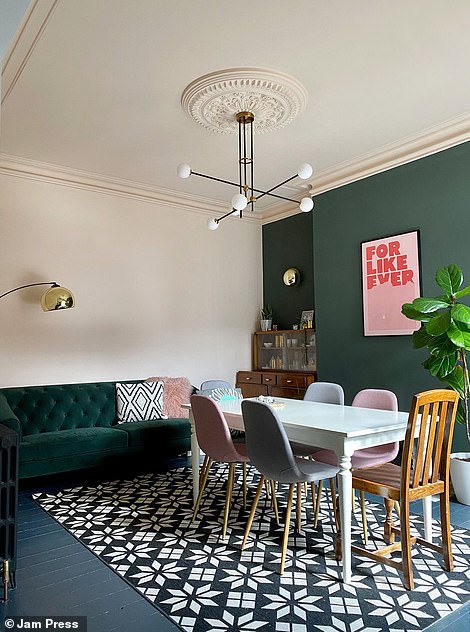 For the dining room, the couple knocked down a wall and Kievah said that she used the Roomle app to plan layouts and schemes throughout the house (pictured left, the dining room during the transformation, and right, after)

The couple were finally able to move into their new home in Easter 2019, with Kievah revealing: ‘My dad is a joiner and worked so hard to make the house what it is today.

‘We then carried on renovating and decorating while we were living in the house and are still ticking jobs off the list now.’

However the couple hit a bump in the road when the coronavirus pandemic hit in 2020, with Kievah admitting it limited the progress they could make on their home.

Kievah said: ‘I would say the hardest part of the renovation, apart from the initial mess, has been having projects halted through lockdown. 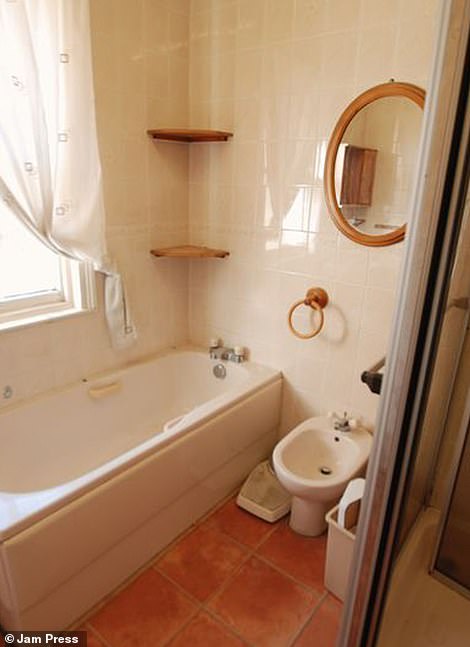 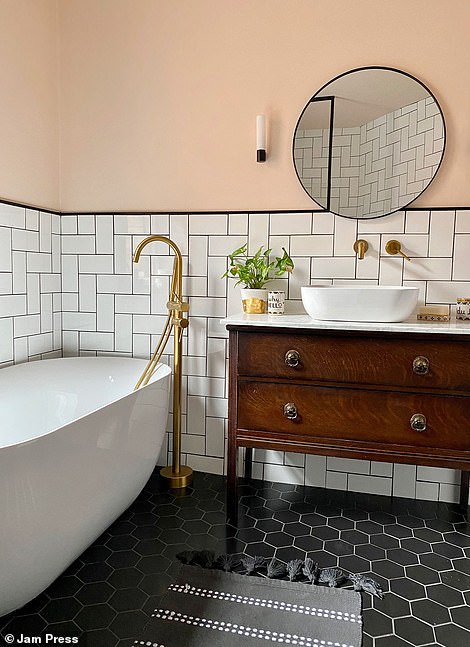 The bathroom is Keivah’s favourite part of the house and was the first room they finished, switching to black tiles and having a large gold tap into the bathtub, with gold taps for the sink above an antique dresser (pictured left, the bathroom before, and right, after the renovations) 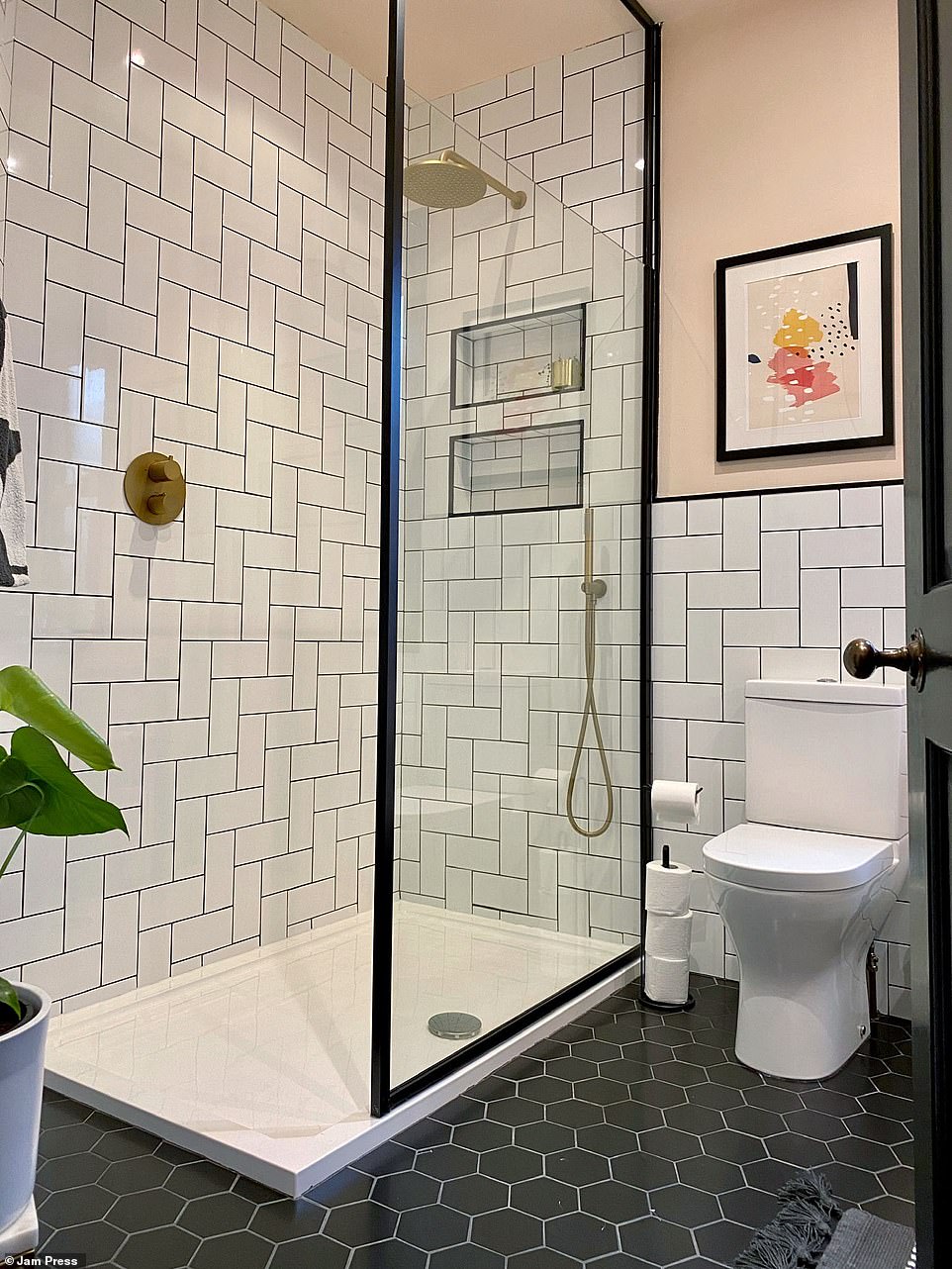 The bathroom also has plants and a modern shower, with a gold rainfall shower head and areas to put products in the walls (pictured: the bathroom after the renovation)

‘Not being able to have friends and family in the house has meant that we haven’t been able to get the help to tackle big projects, especially with a toddler in tow.’

Despite the slow progress in recent months, the couple said they can’t get enough of their updated house, which they say is the perfect space for them as a family.

Kievah said: ‘My favourite part of the house is the bathroom. It was the first room we completely finished and it’s my sanctuary.

‘Having a peaceful and clean place to retire to in the midst of renovation chaos was so important and it’s a room I still wouldn’t change a thing in.’ 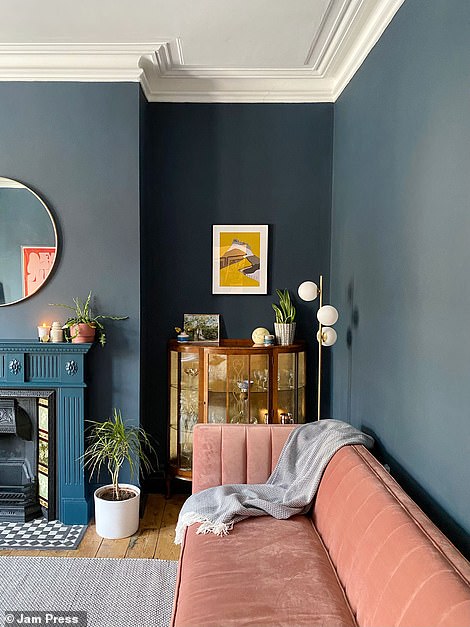 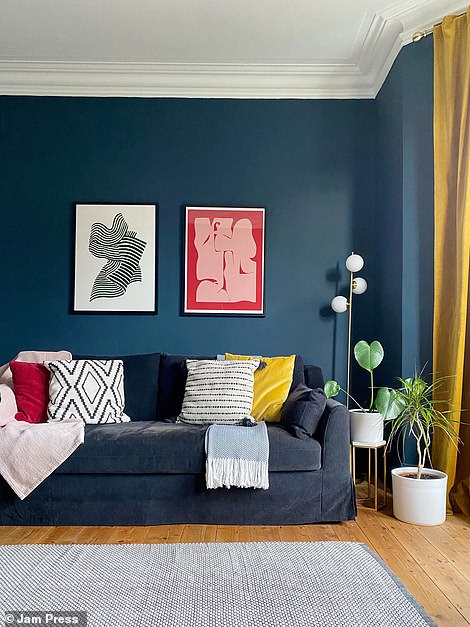 The living room now has navy walls and yellow curtains, with a feature pink sofa and grey rug on the wooden flooring (pictured: the living room after the renovation)

But the pair aren’t finished with their home transformation yet and still have lots planned for the future.

The mother-of-one said: ‘Next on the list is the utility room and downstairs toilet and then the front door and entryway.

‘Once the majority of our inside jobs are complete, we need to tackle the outside of the house, front garden and backyard.’ 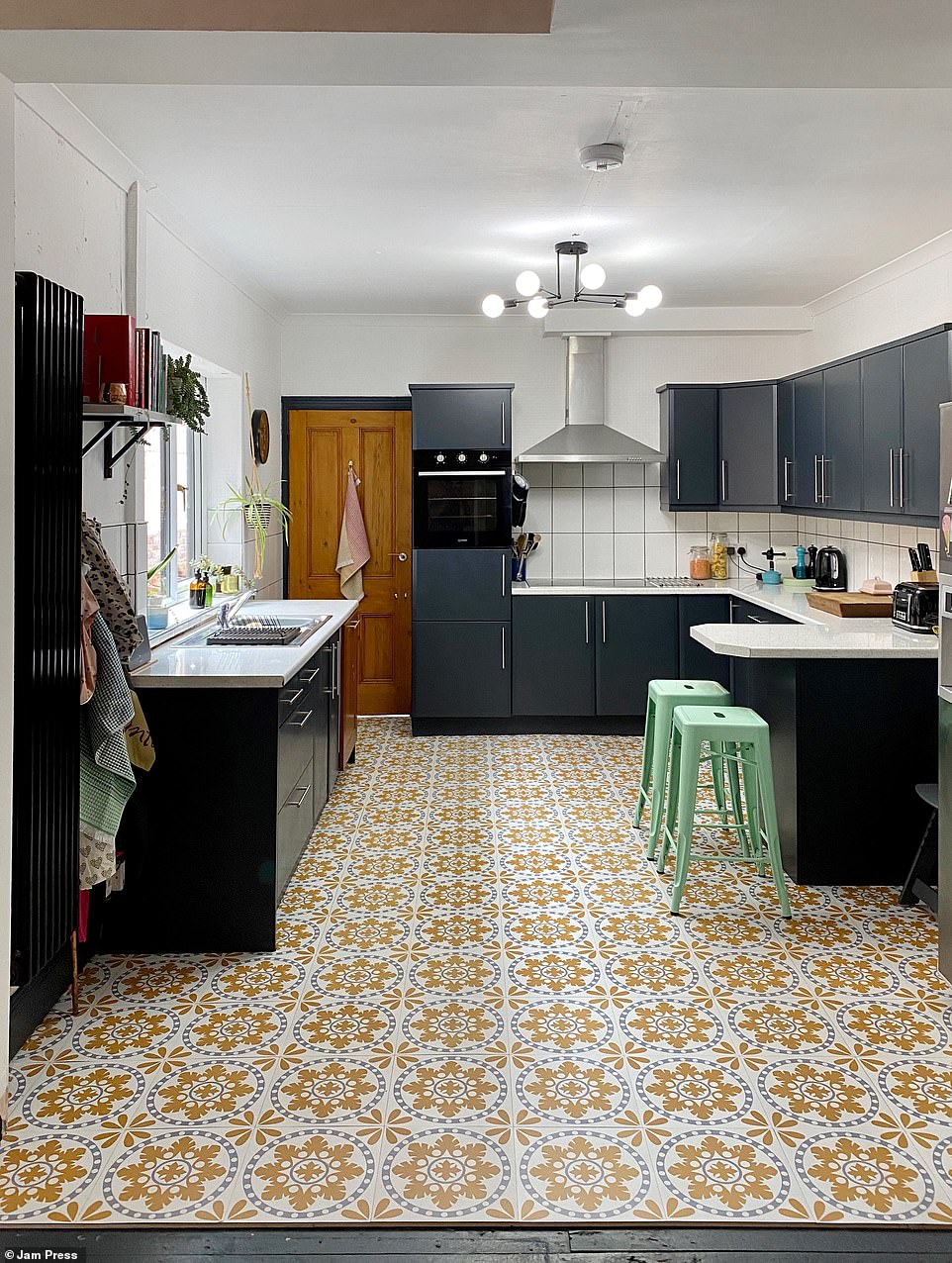 The couple painted the cupboard doors black, stencilling a yellow and blue pattern on white tiles and adding two mint green stools at the breakfast bar (pictured: the kitchen after the transformation)

As for others who are considering their own home transformation, Kievah explained the most important thing is to be prepared to splash out more than planned, saying: ‘Things can always cost more than you think they’re going to.

‘We were able to get our house to a certain point with our initial budget and then we’ve just been tackling the smaller projects as we’ve gone along.

‘It can be really overwhelming and quite draining when you first take on a project, especially if you’re having to get multiple things tackled at once but it’s so worth it when you get each job ticked off your list and look at how far you’ve come.’