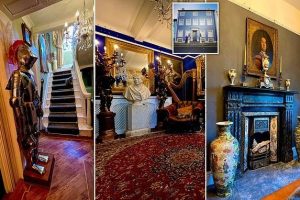 ‘It’s like a full-size doll’s house’: Couple reveal flamboyant revamp of Georgian ‘wreck’ they snapped up for £235,000 – saying they’ve since spent £1million filling it with antiques, including a suit of shining armour

A couple have revealed how they’ve transformed an unloved period property back to its former glory – filling it with expensive antiques and artwork.

Jamie Verron, 32, and Steve White, 35, love opulent interiors based on historical periods in British history and couldn’t believe their luck when they spotted Whitehaven Hall in Cumbria on the market.

The 1710 property was in a state of disrepair when they paid £235,000 for it in May 2021, leaving their previous terraced house in Northampton – but they faced a huge restoration task after wiring and flooding problems when they moved in.

However, just over two years on, the period home is now looking like a film set, with enormous paintings, gleaming antiques and even a suit of armour. The couple share their home with seven Persian grey cats, and say locals do look at them as if they’re a tad ‘eccentric’. 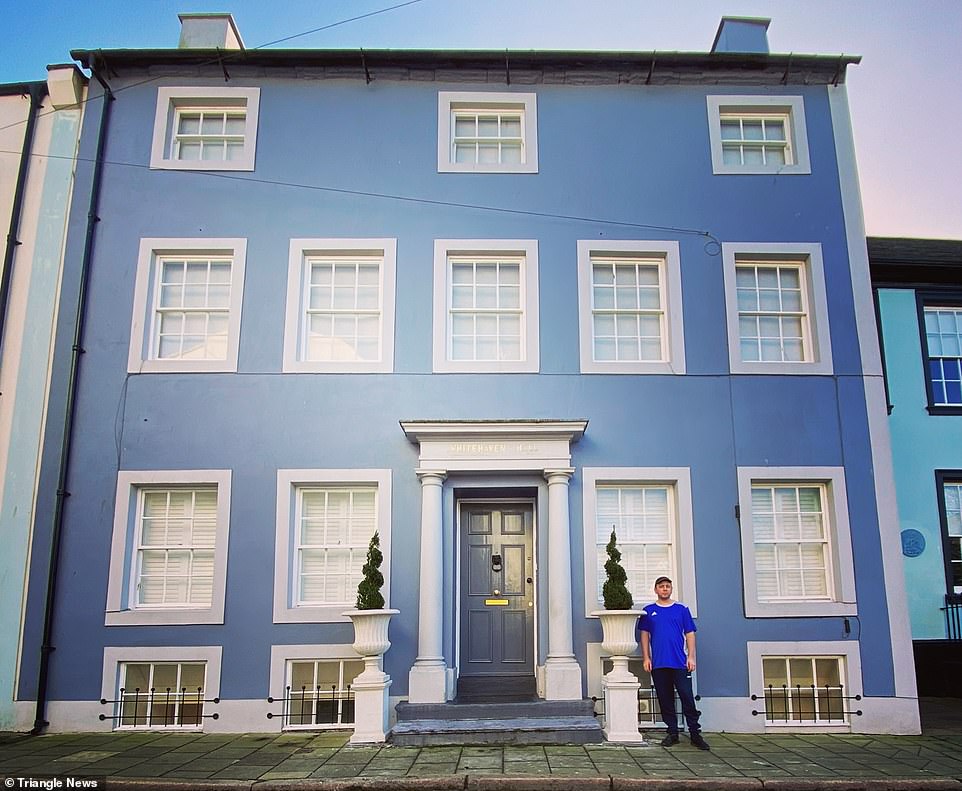 Jamie Verron, 32, and Steve White, 35 (pictured), lived in Victorian terrace in a ‘rough street’ in Northampton until lockdown, and then decided to find somewhere more tranquil, with the Lake District top of their wish-list 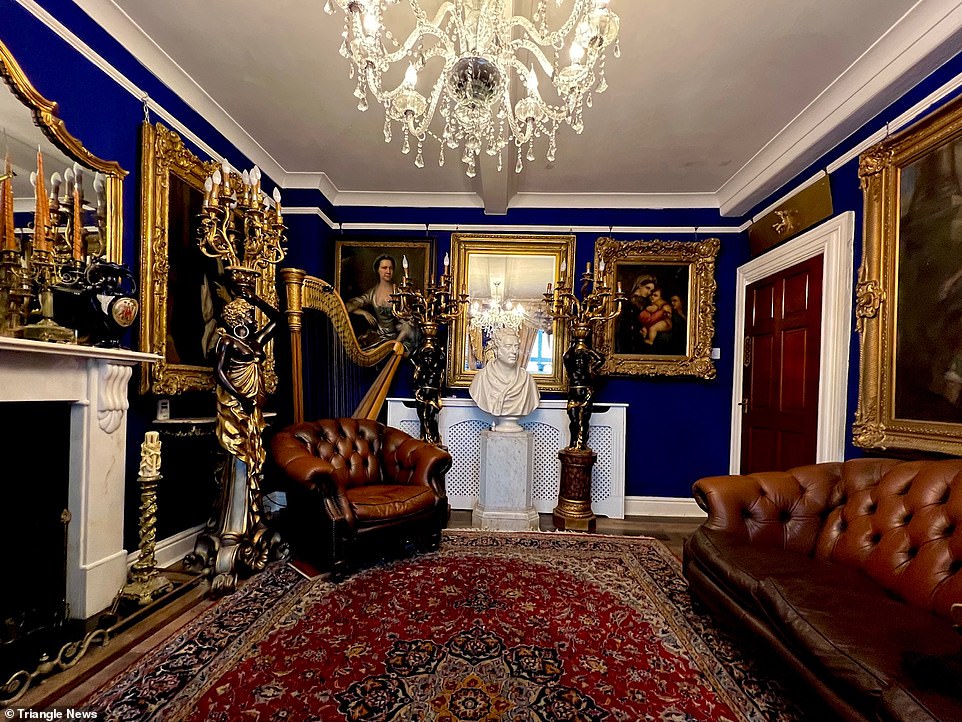 The couple spotted Whitehaven Hall in Cumbria and paid £235,000 for the unloved property – and then set about restoring it to its original Georgian glory 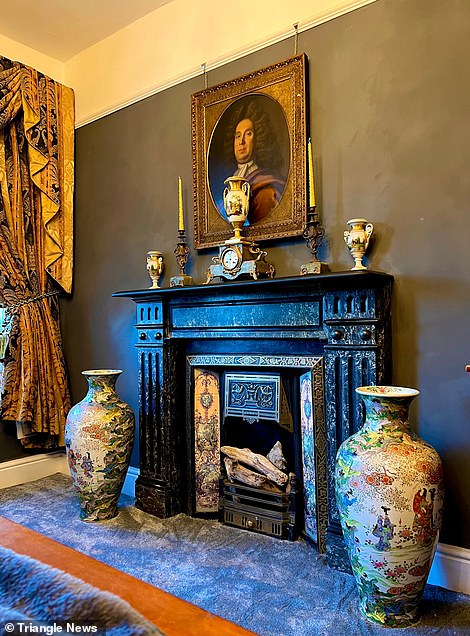 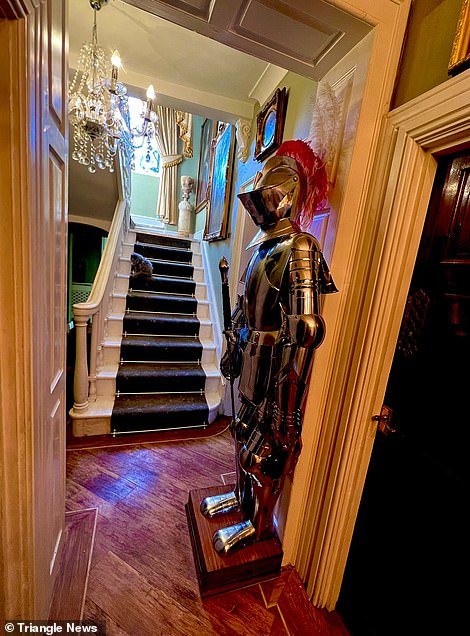 Jamie and Steve estimate they’ve spent more than a million pounds on artworks and antiques – but have faced criticism for some of their choices, including statues and busts of historical figures 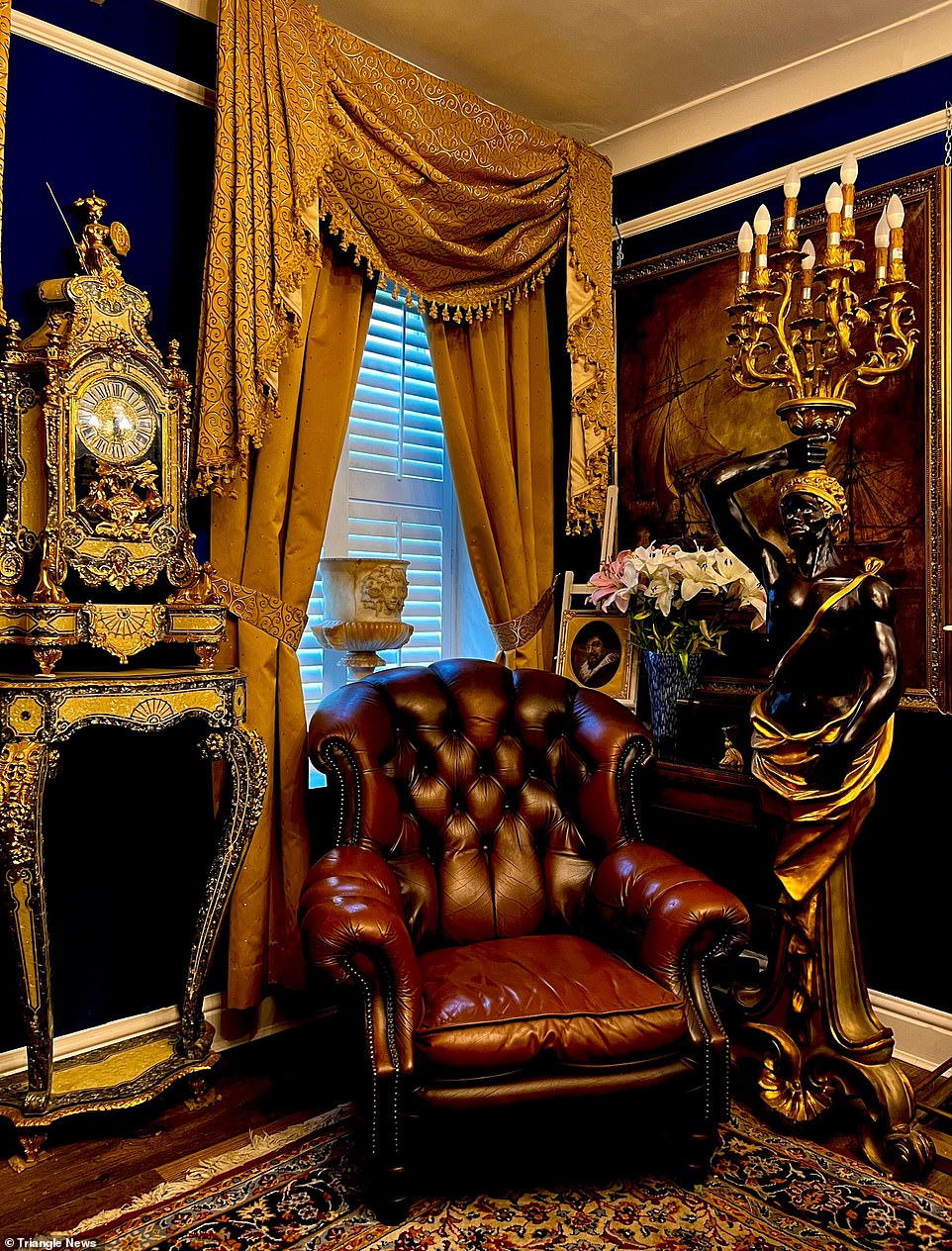 Steve, who already had an impressive collection of artwork, has filled the rooms with antiquities to restore its Georgian character

The house was transformed in just a year by Jamie and Steve after they left the Midlands. Steve explains: ‘It’s flamboyant but it is all period stuff. Obviously we have got cinema rooms and modern bits as well but a lot of the stuff is from the period – it is in keeping. In person it is even grander.’

The couple used to live in a Victorian town house in a ‘rough street’ in Northampton, where they say they saw stabbings and drug busts.

But after Steve was threatened they immediately went online to look for a house elsewhere and they were drawn to the areas surrounding the Lake District national Park.

Just months later, in May 2021, they bought their dream house – just by the coast and without a mortgage after selling up down south.

Steve, 32, works in a food shop while Jamie, 35, is retired. Jamie added: ‘It was horrible and with lockdown we were stuck there with this going on. It wasn’t like you could even escape. And one half my other half got threatened and I just went online and searched the country. 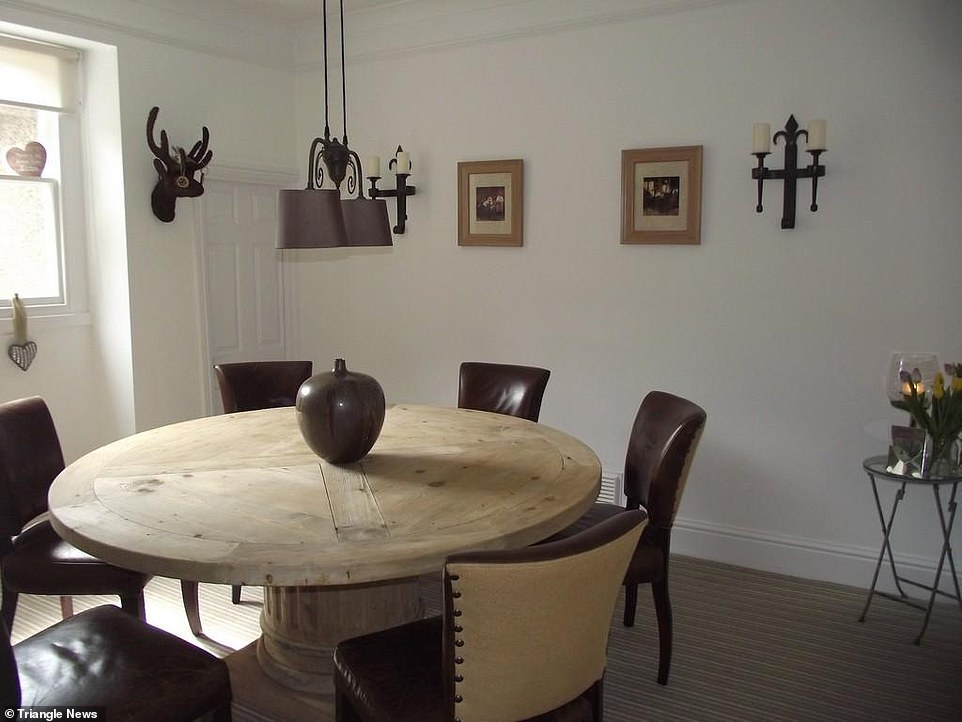 Unloved: The property had modern furniture in it when it caught the couple’s eye in late 2020 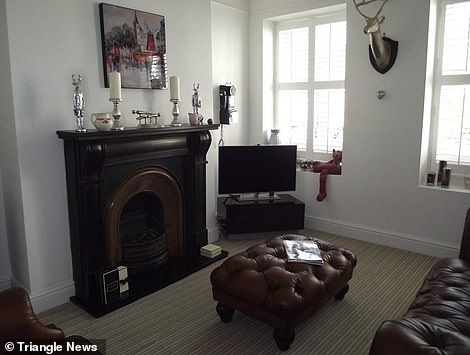 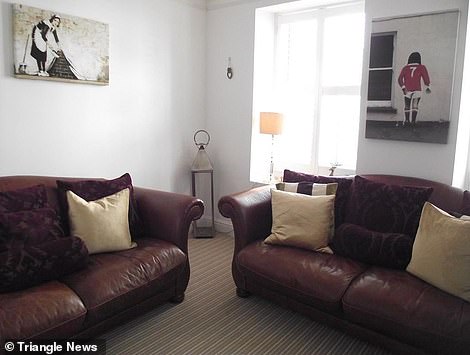 Neutrals: The home, which sold for £235,000, had beige carpets throughout and white walls – which Jamie and Steve set about transforming after they moved in 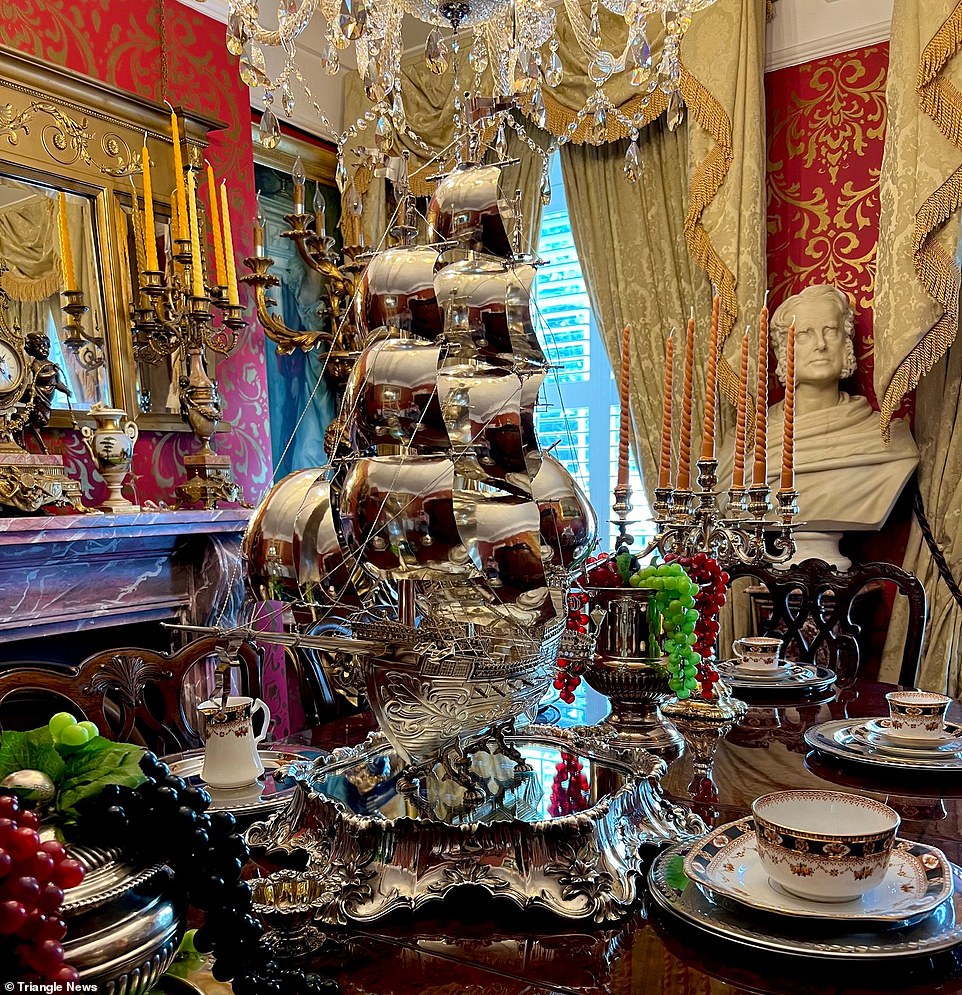 The Grade II listed pad is now brimming with period pieces, including a shiny galleon ship, which takes centre stage in the dining room 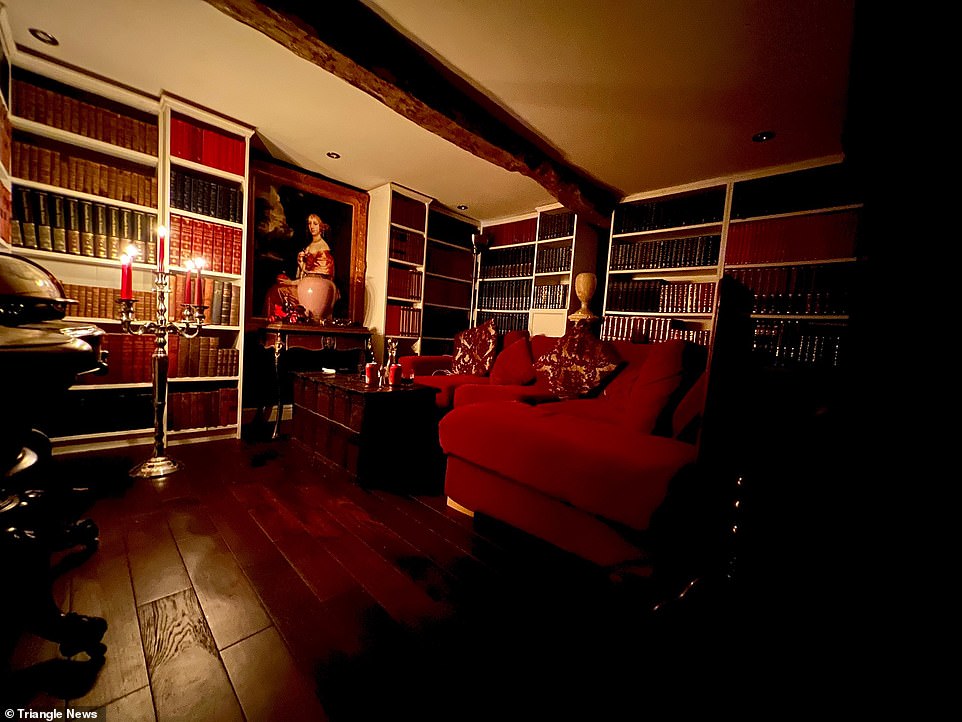 Some of the rooms in the house are still modern, but for the most part, the couple have tried to stay faithful to how the house might have once looked 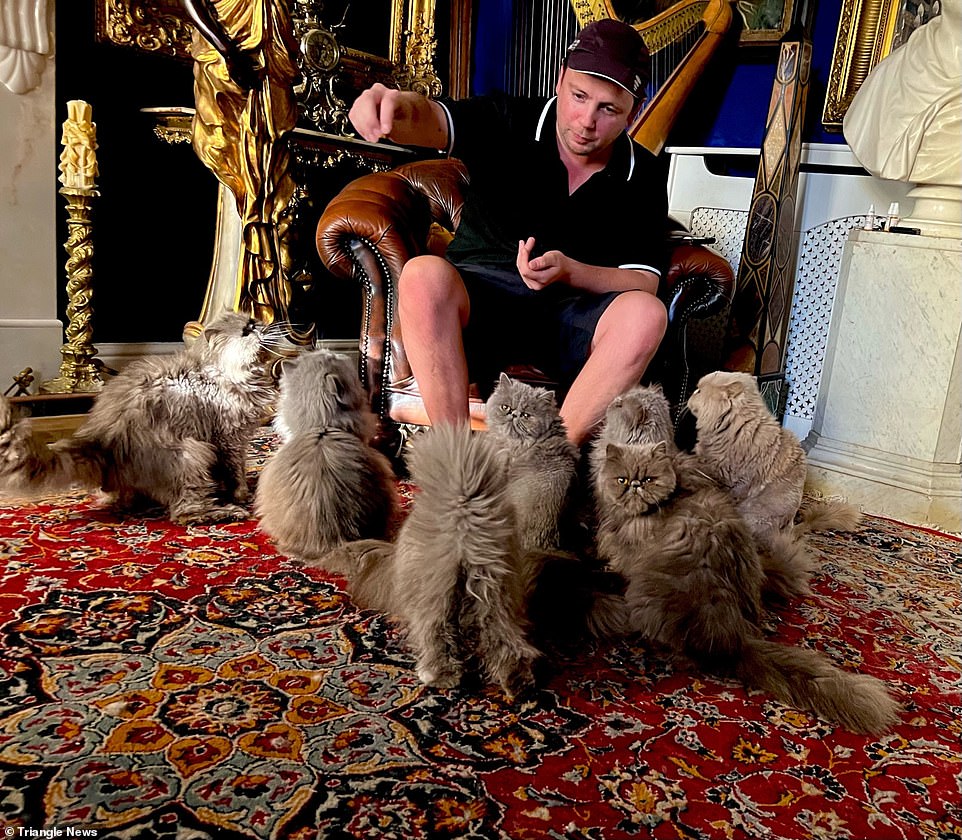 They share their home with seven grey Persian cats and say it was ‘vile’ when they first moved in, after a series of wiring and flooding problems 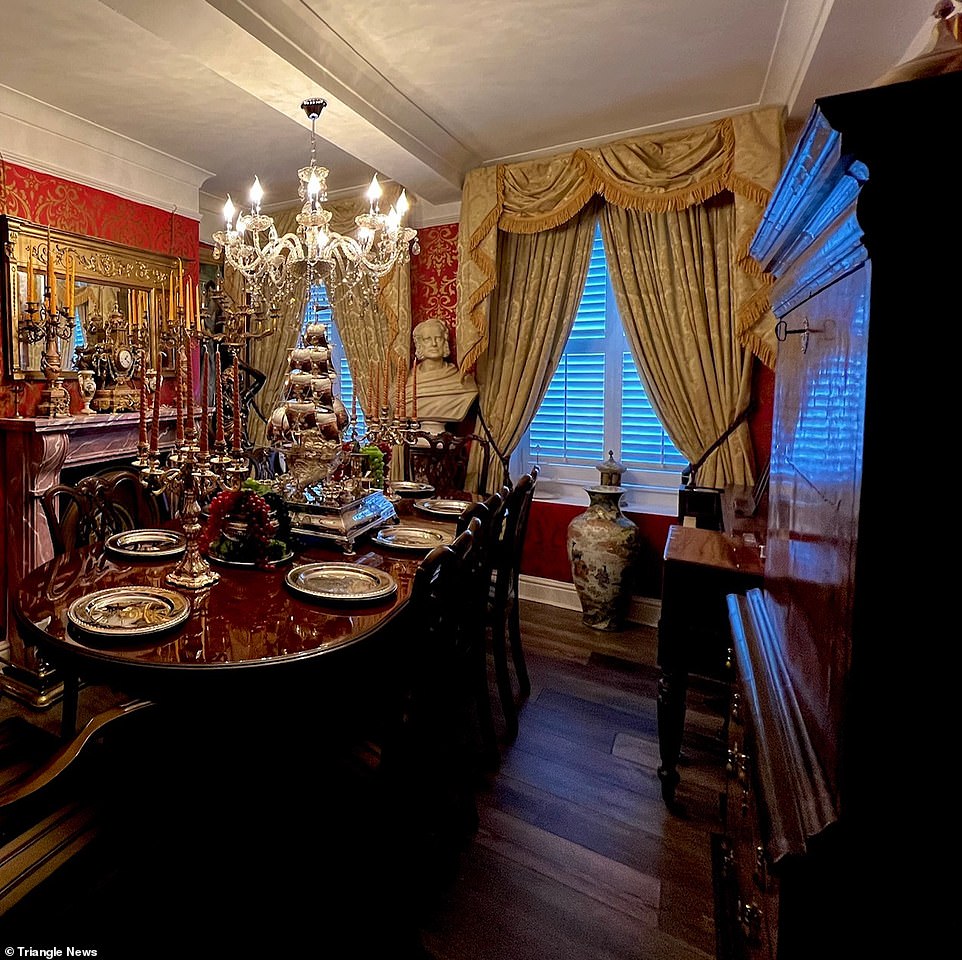 When the couple first spotted the property, they though it looked like a ‘full-size doll’s house!’

‘I wish I had moved up here decades ago – it’s a totally different lifestyle and so much nicer.’

His revamp included replacing the doors with solid mahogany and putting in marble fireplaces. But they have kept everything that they could that was old and well kept.

Jamie, who had a lot of the classical art before they moved in, was able to pad out the floors with his already impressive collection.

And the pair were in good company – the house next door to theirs has links to George Washington and had been carefully preserved,

He was able to buy more antiques after selling off some of his collection of marble busts – making a profit after they came back into fashion and rocketed in value overseas. 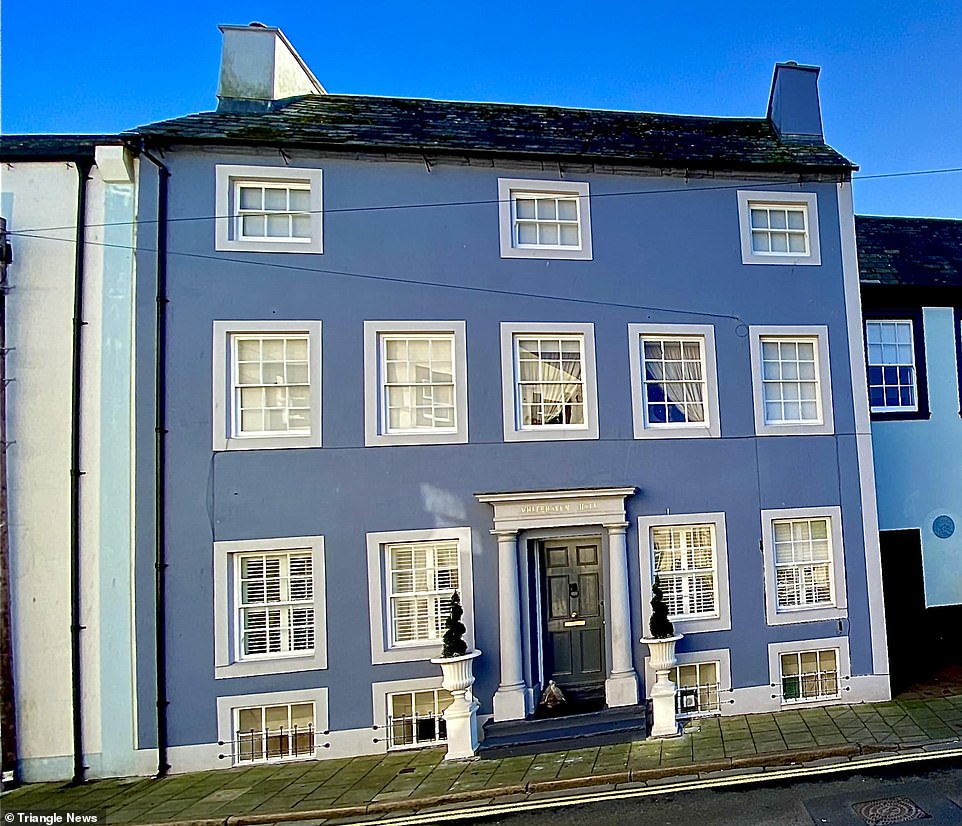 The beautiful blue exterior of the Cumbrian home, which was built in 1710 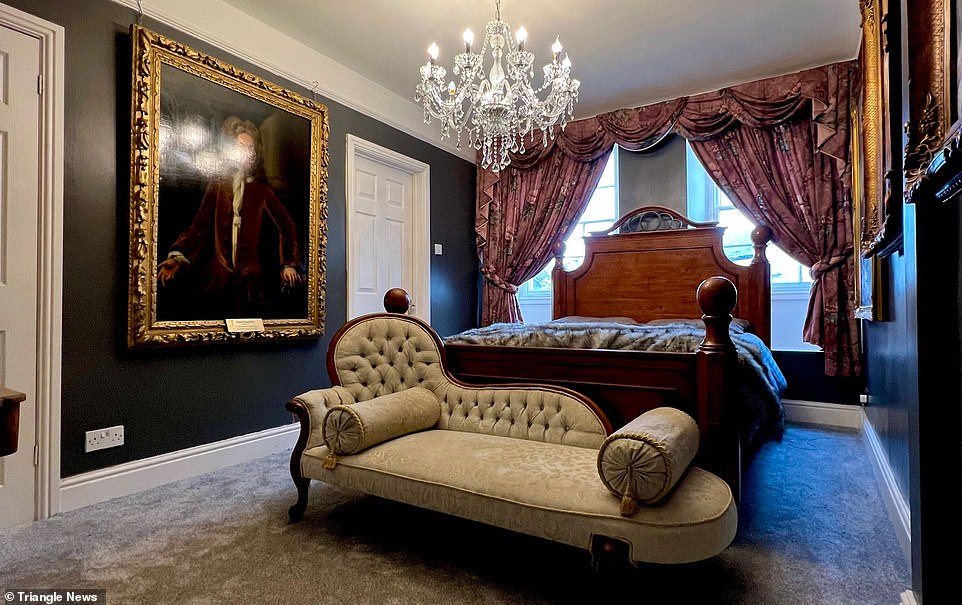 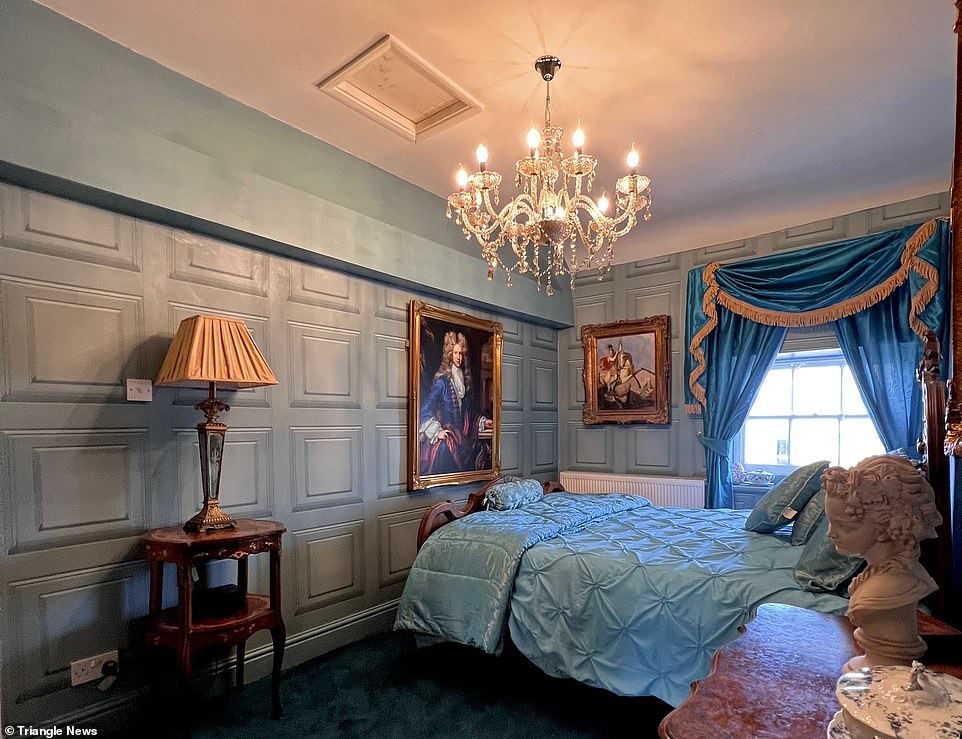 One of the bedrooms in the house, which has its panelled walls – as it might have had in Georgian times reinstalled

Other bits were picked up from private collections, bankruptcy sales, fine art auctions and antique auctions.

Jamie discovered his love for antiques when he moved into a Georgian apartment in 2009 and found his modern furniture didn’t fit in.

He said: ‘When I moved into the Georgian apartment – you can’t really do modern. So I went old, and once I got old I liked it and it suited the Victorian house.

‘Plus I have noticed with the moody maximalism trend people like it and it’s become fashionable.

But when Jamie and Steve moved in, their dream house quickly turned into a nightmare – as the two discovered the first floor flooded with sewage and the electrics shot after a rat chewed through the wiring and pipes.

And they were shocked by the decor which they say had no respect for the house’s history.

They did what they could to do it themselves – but had to admit defeat with the flooding and got professionals in.

Jamie continued: ‘It was a nightmare – an absolute nightmare,

‘The flooding was awful – a whole floor that was just vile. Whoever had had it had not cared that it was an old house. Every room was bleach-white – it was ultra-modern.

‘So bit by bit we’ve been fixing the problems of it being left and putting old stuff back in it, which is how it would have been when it was built.’

But the house has also seen criticism as people online react to Jamie and Steve’s opulent way of living.

The pair also came under fire as activists saw some of their statues as racist when the estate agent marketed their former house – but they say the increased publicity only helped to sell the property.

Jamie said: ‘You get the odd prat online who’s like: ‘That’s awful,’ but it’s like: ‘Whatever mate, one of my paintings probably cost more than your house!’

‘It’s very few who do – even people who like ultra-modern appreciate a big grand old house.

‘We also had a problem with BLM who saw some of the statue photos – there’s nothing wrong with them. I’ve had black friends who are around and have no issue at all.

‘But apparently the statues look racist.

‘It actually worked – because of all the publicity someone actually went: ‘Oh yeah I’ll buy it!’

‘This is what it is all like – this cancel culture. There is nothing wrong with them – the problem is people don’t want to listen.’