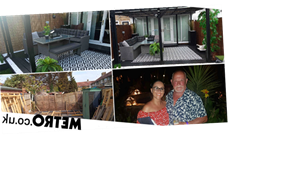 Many people spent the lockdowns turning their homes and gardens into spaces where they could relax, including Katy Roast, 47, and her husband Ken, 68, from Barking and Dagenham.

The couple wanted a big change in their small garden (measuring 5m x 15m and enclosed with a fence). It hadn’t been revamped for ten years, so was well due an upgrade.

They opted for a Thailand-inspired garden, and managed to do the whole thing for £2,500 by doing all the work themselves and snapping up second-hand and discounted items.

Katy, a merchandiser for a department store, was the creative brains behind the project while Ken, partially retired policeman, drew upon his gardening, plumbing and electrical skills to take the lead on the practical aspects.

The transformation was achieved over eight months and now the couple is eagerly waiting for spring to arrive so they can enjoy their tranquil new space to the max.

‘Neither of us could be described as green fingered, so we opted for low maintenance artificial grass and bamboo as the main materials to use for the project,’ Katy told money-saving community LatestDeals.co.uk.

‘As we began the makeover, we noticed that some local branches of a DIY store were closing down. It meant we were able to pick up some bargains, including the grass and bamboo, as well as some gardening ornaments that we used for the finishing touches.’

Armed with the main materials, the couple got down to work. First off, they covered the ‘depressing’ fence in bamboo sheets, as well as replacing the patio for decking (going over their paving stones rather than digging them up.

‘We purchased the wood for the decking from a local timber merchant, which was far cheaper than getting it at one of our local DIY outlets,’ she says. They also laid it themselves.

Next came the laying of the artificial lawn, which they laid by hand.

Due to the hard graft involved, Katy wanted to be able to use the space all year round so set about finding a way to rainproof it.

‘We wanted to build a shelter to shield us from the unpredictable British weather,’ says Katy. ‘We didn’t want a totally enclosed space, so we opted for a pergola with a transparent PVC roof.’

‘It had been built in treated pine by the original owner and was constructed to a very high standard,’ she says.

‘We had to dismantle it and rebuild it with some minor alterations in order to fit the space. We gave it a lick of charcoal paint to match the colour scheme and then fitted it completely over the decking.’

It wasn’t an easy part of the project, as the pergola had to be fitted to their conservatory for stability, and they then decided they didn’t like the corrugated roof, so used willow fence panels and solar lights to soften it up.

The decking area was given some extra definition by adding white pebbles around the edges of the decking, which was the perfect place to install the lights. The white pebbles were also added to the three gabion baskets, which were used to make a bench for a small water fountain.

‘This was initially a planter, which was fitted with a pond liner and small pond pump,’ says Katy.

The feature area was decorated with Buddha head statues, a mirror to bounce the light around, a faux plant and letters made from leftover artificial grass that spell out the word ‘love’.

‘There’s also a main female sitting Buddha statue, named Tara, which was a birthday present from my husband,’ adds Katy.

The garden furniture was bought online from ManoMano and the chiminea was another secondhand find.

‘It was in need of some TLC, so I spray-painted it charcoal and placed a few battery powered pillar candles inside,’ says Katy.

‘The large rug on the decking is made entirely from recycled straws. We bought it from Green Décor and it was a small extravagance.’

Garden design complete, all that was left to do was to sit back and enjoy.

‘Spending time in the garden helps to take us back to the experience of being in Thailand,’ says Katy.

‘It’s so relaxing to be able to sit and look at all the hard work we have done – it has really paid off. Ken is out there under the pergola for hours in all weather.’