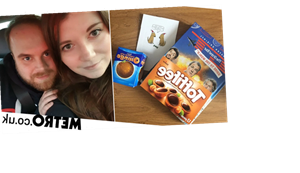 Over 1.7 million people have sent gifts over the years via Reddit’s annual Secret Santa.

The social media site invites users to post their likes and dislikes on a profile, before matching them up with somebody who’ll send them a present worth around £20.

Rarely, though, does it end in a long-term, loving relationship, where the giftee and the gifter move in together – but it did with Jono and Rachel.

32-year-old Jono Purday and 25-year-old Rachel Jones had been Redditors for many years before 2019’s Secret Santa brought them together.

Rachel was living in London and Jono in Leicestershire, when they each decided to put their names down for the huge gift exchange.

Jono was matched with a man who’d upped sticks to convert a van to live in and travel around Europe, and who was big on trying new skills and working with his hands. He bought him a cutthroat razor, a scratch-map of Europe to check off the placed he’d visited, and a rechargeable torch.

Rachel was matched with Jono, and she had to work a little harder to find things he might enjoy, as he confessed his profile was somewhat sparse.

She told Metro.co.uk: ‘I remember I was really stressing about Jono because he didn’t put much on his profile.

‘When you sign up for Reddit gifts you have a couple of questions that you have to answer about yourself, and a description to help your Santa. And he didn’t really give any information.

‘So ended up like through his Facebook and Instagram – all the social media that I could – and I was like, “Okay, I’m gonna try and get him like some sweets and then maybe try and pinpoint two things that I know from him.”‘

Rachel ended up sending Jono a Shark Card for Grand Theft Auto (in-game currency) and a The Grand Tour – both of which she found out he liked from social media. She also added in some sweets, including a Terry’s Chocolate Orange (a tradition at Christmas).

After Jono got in touch with Rachel to say thank you, their conversation blossomed – although Jono says Rachel ‘left [him] on read until the New Year’, which she says is because she was nervous.

‘It sort of snowballed from there.’

The couple first met up in person in a park in Leicestershire just before Covid-19 hit, and thankfully the spark was there in person as it had been when they messaged.

The pandemic made life difficult for the couple (as it has done for many) as they were then not able to see each other after that.

The two-hour distance and ongoing pandemic forced them to make some decisions, and they chose to move in together near Leicester.

Jono is a wedding photographer and Rachel works in a hotel, so they’re planning on deciding on whether they move to London or stay put once their lease expires in March.

They know how serendipitous their story is, with Rachel saying: ‘We both signed up just to give to someone else. We never expected to get into any sort of friendship, let alone a relationship.’

She added: ‘It was more of an emotional connection first, and then when we met it was like “okay, there is a physical connection there as well” and that just heightens everything.’

Jono says of their fateful meeting story, ‘It just went from us having so much in common. It was really difficult not to talk to Rachel to be honest. It just naturally flowed…

‘It’s weird, because we were both in a situation where we weren’t looking for something. We just clicked.’

As an homage to their origin story, the pair have both signed up for this year’s Reddit Secret Santa (the draw is on 7 December) individually, and say they’re both ‘really excited’,

‘You read so much bad stuff on the internet, you know, and it’s just nice to sort of connect with a stranger and have the opportunity to learn about somebody for fun,’ says Jono.

Rachel has convinced him to put more on his gift exchange profile this year so his match doesn’t need to ‘stalk’ him like she had to.

Jono jokes that Rachel ‘best not meet anybody else’, but both are hoping that they’ll potentially meet new friends with some common interests through the Secret Santa.

Their tips on the massive gift exchange – over 50,000 people have already signed up this year – are to help your match to learn about you in the best way possible.

Not everybody can be as lucky as the pair of them, and it’s possible that you might send your gift off to someone who you never interact with again. However, in a truly terrible year, it’s nice to see something sweet like this happen.

From a few gifts sent away at the post office to a happy relationship, Rachel and Jono have definitely done 2020 right.

They’ll be spending this Christmas together, despite not knowing their soulmate was just a parcel away 12 months ago.

MORE : I usually dread the Christmas work do, but I’m not ashamed to say I’ll miss it this year