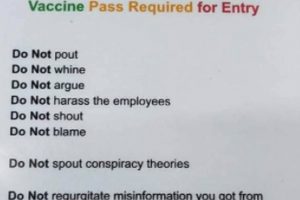 Day one of the new traffic light system has finally arrived for Kiwis and with it the all-important vaccine passes which allow more freedoms for the vaccinated.

Shops are buzzing, Auckland is making the most of their newfound freedom and for most cafes around the country, they are getting used to asking for vaccine passports upon entry.

But the time for tiptoeing around the vaccine passport requirement is gone and one North Canterbury cafe isn’t in a mood to be mucked around.

In a picture posted on Twitter by NZNeep, the rules upon entry to The Cheviot Tea Rooms are clear as day.

Stated in green, orange and red on a laminated piece of paper reads, “vaccine pass required for entry”.

Followed by some black and white housekeeping rules for customers.

“Do Not pout, Do Not whine, Do Not argue, Do Not harass the employees, Do Not shout, Do Not blame.

“Do Not spout conspiracy theories.

“Do Not regurgitate misinformation you got from Karen on Facebook.”

The page of rules then boldly signs off with, “Do No be the one we laugh about when you leave.”

Cheviot Tea Rooms owner Rebecca told the Herald the sign was inspired by others she had seen.

“It was supposed to poke a bit of fun at the passports we are requiring on-site and certainly not supposed to upset anyone.

“It was supposed to be quite light-hearted.”

While the cafe hasn’t received any backlash in person today, Rebecca noted “there was a bit of backlash on my post [on Facebook] this morning that was since taken down being compared to Nazis and concentration camps.”

But as far as things go face to face, customers at The Cheviot Tea Rooms have been grateful for the cafe closely following the rules at the orange light setting.

“Lots of truck drivers, even prior [to the orange setting] were looking forward to knowing they were stopping somewhere that they were going to be safe.”

The team at the tea rooms also said they are very thankful to the customers who have taken the sign as it was intended.

“I’ve heard lots of laughs coming out the front today so thank you for taking it lightly.

“We’re going to be here for a while so let’s not get too much of a headache.”

But if there is one piece of advice the cafe owner wants to pass onto those printing their vaccine passports, it’s please don’t print them too small because they can be quite hard to scan.

As the country enters its first day in the new traffic light framework, almost 90 per cent of double vaccinated Kiwis have their My Vaccine Passes and the vaccination rate continues to climb.

Fifteen of the nation’s 20 district health boardsnow have more than 90 per cent of their eligible populations with at least one dose of the Pfizer vaccine.