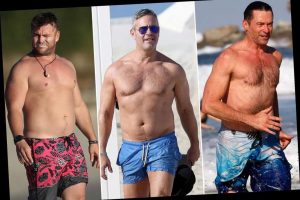 Why a year of COVID has been hell for NYC singles

Embrace the bulge: Scales have once again been tipped in favor of the common man.

Nearly 75% of singles are more turned on by a “dad bod” over any other body type — including a mate with rock-hard washboard abs, according to a sexy new survey of 2,000 people by Dating.com.

Dad bods — think paunchy and pec-less — usually refer to dudes, but the researchers didn’t differentiate between genders, opting instead for a “singles” designation. (Whether this means it’s possible for a woman to have a “dad bod” is unclear.)

The term first came to viral popularity in 2015, when a shirtless, love-handled, childless Leonardo DiCaprio was photographed by paparazzi romping on a beach with a supermodel.

Fast-forward six years: If pandemic dating involved lots of FaceTime dates, Netflix and nights in with Seamless, post-pandemic dating could be defined by showing off your vaccine card, throwing caution to the wind, and proudly parading your COVID-15 weight gain.

“Singles are beginning to embrace more body types as they know the struggle of staying in shape during the pandemic,” Dating.com VP Maria Sullivan told Insider.

Sure, another survey by the American Psychological Association of 3,013 adults found that 42% of respondents gained an average of 29 pounds, while 10% packed on more than 50 pounds during lockdown.

However, Dating.com’s hot daddy body study also found that 70% of solo-flyers have amped up their workout routines, or returned to the gym in the last few months so they can put their best foot forward for 2021’s upcoming “Summer of Love” revival.

But there’s no need to get buff, according to the new poll, which reported that 20% of singles said “that body type doesn’t matter” when it comes to lusting after a mate.

“Very fit and in shape bodies are seen as ideal when it comes to attracting a partner,” Sullivan added in a press statement. “[But our users] just proved that isn’t always the case when it comes to real life romances.”

And it’s not just the pandemic causing a shift away from washboard abs and bulging biceps. Dad bods are on the up and up. A 2019 Planet Fitness survey found that 61% of respondents said men with dad bods are “sexy” — a stat that was 10% higher than in 2018.

“Movies and TV shows tend to promote Barbie and Ken body types, giving people the idea that they need to look similar in order to find their match,” Sullivan said. “We’re happy to be able to confirm that is not how the real world actually operates. No matter your body type, your soul mate is out there.”

At this rate, “grand-dad bods” might be the next shape to shoot for.